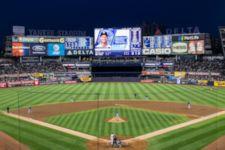 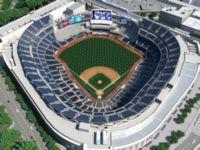 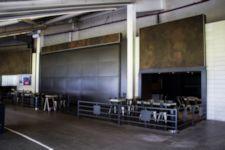 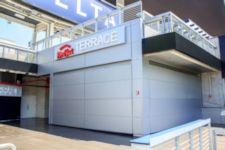 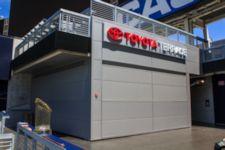 Yankee Stadium enhancements include five bifold doors from Schweiss Doors
FAIRFAX, Minn., Dec. 4, 2017 – The famous old Yankee Stadium was nicknamed “The House That Ruth Built,” acknowledging Babe Ruth, the legendary baseball icon whose prime years coincided with the stadium’s opening and a great run of World Series teams in the 1920s and 1930s.

In 2006, construction started on a new $2.3 billion stadium adjacent to the historic Bronx ballpark, which closed in 2008, giving way to the new stadium at the start of the 2009 season.

Any of the Yankees legends, including Ruth, Lou Gehrig, Roger Maris or Mickey Mantle, would be thrilled to step into the batter’s box at the new park, which underwent numerous enhancements during the months leading up to the 2017 season. Among the retrofit improvements are five bifold liftstrap designer doors from Schweiss Doors.

The largest of the custom doors measures 27 feet, 5 inches wide and 11 feet, 4 inches tall. Two more doors are 23 feet, 4 inches by 9 feet, 2 inches, and two more measure 21 feet, 10 inches by 9 feet, 2 inches. All five doors are fitted with electric photo eye sensors, black liftstraps, manual latches and alike-keyed opening and closing switches. Four doors are clad in a high-tech brushed aluminum to blend in with the façade whether the doors are open or closed.

One of the stadium doors performs at the AT&T Sports Lounge at the mezzanine level on the leftfield line. The AT&T door is clad in wood and tile on the outside and when it’s closed, you can’t tell it’s an operational door. Two additional concession/bar areas, with two doors each set at right angles, are located in the right-center field and left-center field areas on the Triple Zero level.

Hunters Roberts Construction Group of New York, was awarded the off-season enhancement project. The company also performed design/build services to construct three 5,000-space parking garages at the new stadium facility. Hunter Roberts has led some of the most complex projects on the East Coast.

Paul Wassenbergh, senior project manager and director of interiors preconstruction for Hunter Roberts, was part of the Construction Management team that procured and managed the installation of the doors. The actual installation work was performed by AJ Garage Door & Service of Oakdale, N.Y. Exterior cladding was applied to the doors by Barrett Inc. of Danbury, Conn.

“The Yankees were looking for a bifold door, Schweiss wasn’t in the specs, but I did put the name forward as an equivalent,” says Wassenbergh. “We recommended Schweiss to the architectural and design team and they accepted it.”

After scouting a few other door companies, Wassenbergh decided the simplicity of design, along with the liftstraps, was a part of why Schweiss Doors was chosen. Bifold doors were also chosen because they didn’t have room for other components, such as a hydraulic pump or counter weights. The compact fit of the Schweiss door was the deciding factor.

“The bifold doors are heavy duty, very solid and functional,” Wassenbergh says. “They will be a long-lasting solid piece of equipment that I don’t ever see failing. I like how easy they are to use.”

Anthony Rosalia, owner of AJ Garage Door, has installed both the hydraulic and bifold doors from Schweiss. He believes the price and functionality of the doors played a big part in choosing Schweiss for the Yankee Stadium projects.

“I’m very familiar with the larger doors,” Rosalia says. “I like the Schweiss doors a lot. They are very unique and user-friendly once installed. Everywhere I’ve ever installed these doors, they have become the focal point of the entire property, they really do. There were 30 trades on the Yankee Stadium job and when we had those doors working, it basically came to a standstill. There are some particulars of the Schweiss doors that are very favorable to some people.”

The new Sunrun Kids Clubhouse is outfitted with a variety of interactive and engaging activities for the Yankees’ youngest fans and these young fans are the future of Yankees baseball.

AT&T_SportsLounge1: The largest of the Schweiss Doors bifold liftstrap doors at Yankee Stadium measures 27 feet, 5 inches by 11 feet, 4 inches at the AT&T Sports Lounge on the mezzanine level on the left field line.

AT&T_SportsLounge2: The AT&T door is clad in wood and tile, so when closed, it blends into the façade and closes off the bar and TV area inside.

Franks_Redhot: Two bifold doors measuring 23 feet, 4 inches by 9 feet, 2 inches are set at right angles to each other at the new Frank’s RedHot Terrace. All of the doors have keyed-alike opening and closing switches and electric photo eye sensors.

Franks_RedHot2: This open air location at Frank’s RedHot Terrace offers a view of the game from the outfield, as well as a unique look at the action in the bullpens. After the game, the doors are closed to keep content secure.

Toyota_Terrace: The Toyota Terrace features a full bar and food offerings as well as USB outlets for charging phones and tablets. Both of these Schweiss Doors, measuring 21 feet, 10 inches by 9 feet, 2 inches are clad in high-tech brushed aluminum.

Yankee_Stadium1 AND Yankee_Stadium2: Schweiss Doors was called upon to supply five bifold liftstrap doors as part of the offseason enhancements project at Yankee Stadium before the 2017 season. Doors were installed at three different locations. 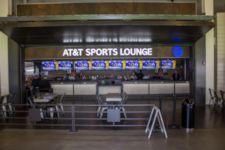 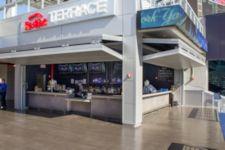