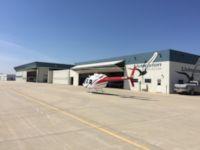 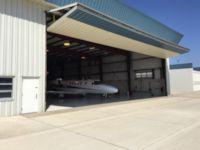 Schweiss Doors proves to be premier choice for Waterloo airport hangars
City-owned facility has been installing Schweiss doors for 20 years
FAIRFAX, Minn., August 10, 2017 – If there was a gathering place for hangar doors, the Waterloo Regional Airport may qualify. Schweiss Doors has been delivering bifold doors to the Waterloo, Iowa airport for the last 20 years, some doors up to 60 feet wide.

Hangars at the Waterloo Regional Airport are leased by the city to private pilots and corporations. Three of the large hangars house jet aircraft, while others contain multiple planes, floatplanes, jets and helicopters.

“After we got the first door with the straps, we wanted every door with straps,” says Rusty Zey, airport foreman. “Another reason was because of Dave Schweiss and his knowledge of the doors. Every time I called, he had the answer for me and every time I had a problem, he could help me over the phone.

“We love the doors and have told a lot of other people about them. We’ve done cable to liftstrap conversions on all but five of the doors. I would never put a cable on anything. I now spend a lot less time in these hangars in the wintertime fixing cables. We also converted some of our cable-operated autolatches to strap autolatches and haven’t had a problem with them since.”

Zey also has a 40-foot by 16-foot bifold liftstrap door on his farm shop. He says he loves it and reports no problems.

Out of the 30 hangars at the airport, six are large bulk hangars and two are used as maintenance shops. In 2008, the city chose to replace four sliding doors on T-hangars with bifold doors. The corporate hangar doors have remote openers, photo eye sensors, walkdoors and autolatches. Others have manual latches. For some of the doors, Schweiss supplied the sheeting and insulation and did the installation.

“We put a different manufacturer’s door on one of our hangars and we’ve had problems with it ever since we got it,” Zey says. “We had to do a lot of extra work on that door. The quality and construction of Schweiss doors are excellent. We have hangar doors by three other manufacturers. My honest opinion is the quality of those doors doesn’t compare to Schweiss doors. On a scale of 1 to 10, I give Schweiss a 10. I have and would definitely recommend them to anyone.”

Waterloo, Iowa Regional Airport has more than a dozen Schweiss hangar doors that vary in width from 60’ to small T-hangar doors. The hangars are leased by the city to private pilots and corporations.

Colorful blue cladding across the center of these two bifold hangar doors gives it the appearance of a one-piece Schweiss hydraulic door.

The Livingston Aviation hangar at the Waterloo, Iowa airport is large enough with a big enough Schweiss bifold door to store an assortment of aircraft including this helicopter.

Three of the large hangars have jet aircraft. Multiple planes, floatplanes and helicopters are stored in the other hangars and T-hangars. 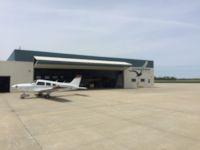 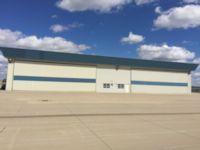 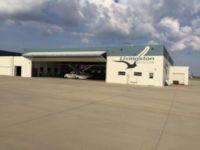 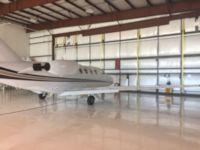