Connecticut High School has multi-use bifold stage and amphitheater door
FAIRFAX, Minn., November 3, 2020 – Built at a cost of $107 million, the new Warren Harding High School in Bridgeport, Conn., was completed in the fall of 2017 and serves more than 1,000 students, grades 9-12. It’s a four-story, 207,000 square foot structure with a curved façade to remind some of the hull of a ship stretching from stem to stern.

Its auditorium at the south side of the school has a retractable, hangar-like bifold door that allows the stage to double as an amphitheater and to share it for indoor and outdoor performances. Schweiss Doors provided a 34-foot, 8-inch by 20-foot bifold liftstrap door with galvanized wind and side rails, a top-drive motor, electric photo eye sensors and door base safety edge and black liftstraps.

The door was clad in aluminum-faced panel, in-filled with traditional metal framing with a couple layers of exterior sheeting, an air vapor barrier and polyiso nonflammable insulation. Polyiso has a high R-value per inch compared to other insulation products and is unique in that the R-value increases with the thickness of the foam. A polyiso continuous insulation system keeps energy and heat loss to a minimum, increasing the building’s energy efficiency and leading to lower monthly operating costs.

Now that construction is complete, the City of Bridgeport can add Warren Harding High School to the list of schools that have achieved LEED (Leadership in Energy and Environmental Design) Gold Certification by the U.S. Green Building Council, ensuring the space is low maintenance and environmentally friendly.

Antinozzi Associates, architects for the project, included what it calls three collabagoras in the main part of the school’s design. A light and airy central space between classrooms, the collabagoras also allow students to see through glass railings to floors above and below.

“The urban security system that is tied into the local police as well is a little more unique to the Bridgewater community,” says David Ferris, Project Architect. “It includes a bank of metal detectors installed at the main entrance. Every entrance has bullet-resistant glass. The facility also boasts 130 security cameras and X-ray machines.

“Schweiss, at the time, was one of the manufacturers that was specified for the door. We did look at another company represented by a local rep and we found out there were some limitations to it. The other manufacturer actually recommended Schweiss. The Schweiss door accomplished the size needed and met our needs for cladding; the way it opened, how it opened and how it impacted the stage when open as well. We had to treat it as an exterior wall. What I like best about the bifold door, quite frankly, are the user possibilities as a community resource. Hopefully, the school will use the band for community school spirit.”

Andron Construction of Golden Bridges, N.Y., was awarded the General Trade Package for this high school. “I think Schweiss doors are straightforward with good ol’ American ingenuity,” says Robert Nalaboff, Andron’s project manager. “Schweiss doors are a specialty product that I can’t say I have anything to compare it to.”

Nalaboff also was pleased with the people that Schweiss recommended to install the bifold door. He says they included a few choices. Duane Howard from Advanced Welding LLC of Southington, Conn., was selected to complete the install.

“What I appreciated most were the people at Schweiss – Brent and the gang and the engineering support,” Nalaboff says. “When it was shop drawing time, everybody was attentive – here’s the load, what it is per square foot, here’s the assembly; there were some electrical changes that Schweiss recommended to the electrical engineer. It was a complete package, what I would term as turnkey, which is important especially when you are guiding an electrical engineer that may be working on another project. It made it easier for him to do his job and he did it readily. Sometimes it ends up at the bottom of somebody’s in-boxes. It was straightforward.”

HardingHigh3: The Schweiss bifold door is equipped with galvanized wind and side rails, a top drive motor, electric photo eye sensors and door base safety edge and black liftstraps. 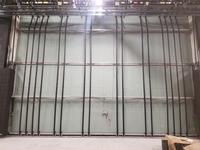 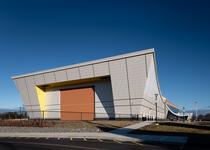 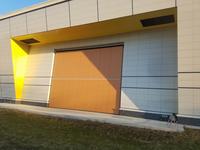