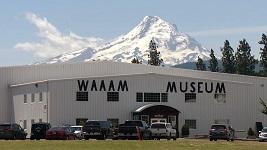 Oregon museum has hot wheels and flying machines
FAIRFAX, Minn., May 4, 2022 – Every day at the Western Antique Aeroplane & Automobile Museum (WAAAM) in Hood River, Ore., is a new adventure. The museum collection is housed in more than 3.5 acres of its indoor hangar facility. For the enthusiast, a day can be too short to see hundreds of cars, planes, motorcycles, military vehicles and more.

The museum opened in 2007, with just under 200,000-square-feet of museum space, all under interconnected buildings. It began with 42 airplanes and 20 automobiles donated by Founder and President Terry Brandt. The museum now has about 170 antique airplanes, 210 antique automobiles and 30 antique motorcycles. In 2009, a second hangar was added to display the collection and a third was built in 2013. A fourth was added in November 2016. In just a few short years, many more aircraft have been added to the museum; the collection of antique automobiles is now equally as impressive as its collection of antique planes.

Part of the museum’s most recent hangar expansion includes a Schweiss Doors 65-foot by 22-foot bifold liftstrap automatic latching door being used on an outside storage building for overflow items. In the main museum complex, they have three other Schweiss bifold doors.

“I like the Schweiss straps and mechanical drive,” Brandt says. “I think the quality of Schweiss doors is fine. I’ve only dealt with the two different kinds of bifold doors. I didn’t bother to do any shopping this time because I was very happy with the last doors we got.”

Brandt continues to collect antique aircraft and memorabilia, even after 50 years. When you talk to him about aircraft, he is like a walking encyclopedia and can rattle stats and histories off the top of his head. In 2006, he decided he would have to make one of two choices – either he would have to have a very large auction or he would have to find a way to ensure his collection would survive by building a museum. Fortunately, he chose the latter and donated his collection to the museum.

“The museum keeps running with a couple hundred volunteers, 50 of which are day-to-day active volunteers that account for 30,000 to 40,000 volunteer manhours,” Brandt says. “These days, I fly anything I want, but basically, I’m pretty much semiretired. I do some test flying, but we have a great staff of retired airplane pilots that do the bulk of the flying for the museum.”

Everything in the building has been donated by someone. About a third of what is there was donated from Brandt’s personal collection. It keeps getting bigger and bigger, and they plan to be bigger yet with two more 40,000 to 50,000 square foot buildings on the drawing board they are raising funds for now.

“This museum has down-to-earth realistic stuff that taught America how to ride motorcycles, drive cars and fly airplanes,” Brandt says. “We have 150 flyable airplanes in the museum. Our staff of volunteers keeps everything operational. We fly the airplanes, run the cars and drive the motorcycles. That’s what has made this place so very, very successful. It’s not a bunch of rusty iron sitting in a dirty building. This is what people like, that’s why people donate their stuff here and sign over the titles; donate it because they want it to go somewhere where it is going to be loved, taken care of and maintained.”

Most of the items in the museum are from the United States, mainly American-made items.

“We have maybe a hundred really rare items here that are the only ones built or only ones left that you might never see anywhere else in the world,” Brandt says. “One example is the one and only surviving flyable 1928 Boeing Model 40C. It was Boeing’s first airliner made to haul passengers. It is a big biplane with a great big radial engine that would haul four passengers in the cabin and 700 pounds of mail.”

They also have a Model 70 Stearman, which was the one-and-only prototype that the Army and Navy flew and evaluated. A total of 10,680 Stearmans were built for World War II. This one-and-only airplane on display at WAAAM is the prototype of the Stearman Model 75 “Kaydet” biplane, an icon of aviation.

Brandt adopted his love of flying at a very early age. His mother and father served as the FBO (fixed base operators) at the airport in Marysville, Calif., and ran a flight school there for several years. Brandt’s father built between 200 and 300 crop dusters, mostly from Stearmans after World War II, and was particularly fond of soaring gliders. WAAAM has the best Stearman collection of any museum in the world, including a half-dozen Stearman squaretails, which were the early Stearmans before World War II. Given the environment he grew up in, it didn’t seem strange to anyone at the time that Brandt learned to fly on a Taylor Cub when he was only 12-years-old. He bought his first airplane at the age of 19 – a 1938 Piper J-3 Cub. It was the forefather of the popular Piper J-3 Cub. Ever since, he’s been an avid collector and aviation enthusiast.

“We’re getting visitors coming here from all over the world now,” Brandt says. “We are better known in Australia, Germany and New Zealand and other places than we are in our own state.”

Brandt now resides in Hood River, Ore., with his wife Lois. He remains extremely active in the business of running the museum and he still enjoys to fly.

WAAAM2: Numerous hangars and an overflow storage building have incorporated four Schweiss Doors bifold doors for museum use. The latest Schweiss bifold door shipped there is a big 65-foot by 22-foot door equipped with an automatic latch system.

WAAAM3: WAAAM’s antique airplane, automobile and motorcycle museum is housed in over 3.5 acres. Just under 200,000 square feet are under interconnected buildings. The popular museum draws people and pilots from all over the world and is open every day of the year except for a few holidays.

WAAAM4: Museum Founder and President Terry Brandt, stands in front of a 1917 Curtiss JN-4D Jenny synonymous with the “barn storming” era of aviation. It was the airplane that taught American pilots of the 1916-1925 era how to fly. It’s from Brandt’s original collection and still one of his favorite planes to fly.

WAAAM5: WAAAM has a 1900 Locomobile Steam Car on display. The Locomobile was a pioneering American automobile known for its dedication to precision before the assembly-line era. This 1913 IH Auto Wagon is a rare find along with many military aircraft and vehicles.

WAAAM6 and WAAAM7: There are a variety of 30 mostly drivable motorcycles dating back to this 1933 Harley Davidson VLE and 1912 Indian Model D along with numerous Cushman’s, Honda’s and a 1948 Schwinn Whizzer to name a few.

WAAAM8: The Hood River Traffic Jam Car Show and parts swap features fun activities such as technical sessions and rides in some historic vehicles. It is held the second Saturday in July.

WAAAM9: WAAAM has about 100 really rare items that are the only ones built or the only ones left that you might never see anywhere else in the world. One example is the one and only surviving flyable 1928 Boeing Model 40C. It was Boeing’s first airliner made to haul passengers and mail. (Photo by Moose Peterson) 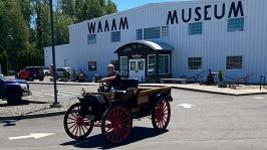 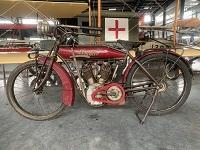 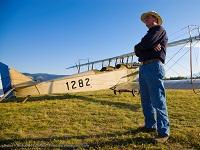 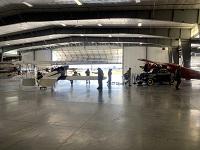 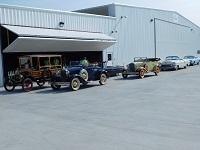 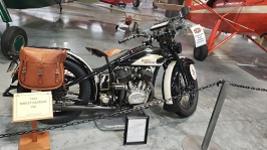 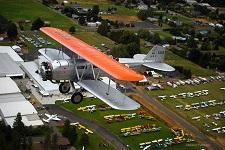 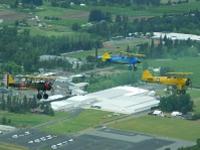