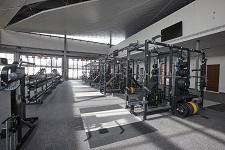 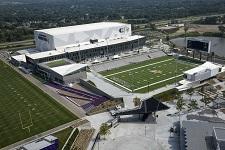 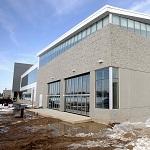 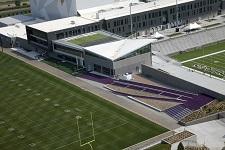 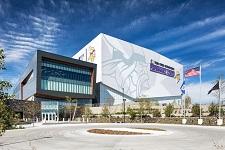 Skol Vikings!
New headquarters features Schweiss bifold glass doors
FAIRFAX, Minn., January 2, 2020 – Quarterback Kirk Cousins recently wrapped up his second regular season with the Minnesota Vikings. Undoubtably, during the free agent recruiting process, Cousins was quite impressed with the new elaborate Twin Cities Orthopedics Performance Center headquarters that works as a 277,000 square-foot practice facility. That, and the fact he would be playing on the year-old U.S. Bank Stadium field and his $84 million guaranteed three-year contract, put some frosting on the cake in his decision to come to Minnesota from Washington.

The Vikings Twins Cities Orthopedics Performance Center campus sits on about 35 acres just south of Interstate 494 and east of Dodd Road. The team’s partner also has an 88,000 square-foot treatment and sports medicine center on this Eagan, Minn., campus, not far from the Minneapolis airport.

The state-of-the-art team facility has four outdoor practice fields, including two that are heated and one that is synthetic, a 6,500-seat outdoor practice stadium and a field house with a 98-foot high roof for punting. The Vikings permanently vacated the Eden Prairie space that opened in 1981 and was named after the franchise’s founder, Max Winter. It is here that they now prepare for the season instead of heading off to Mankato State College each summer.

The weight room has two walls of floor-to-ceiling windows with two Schweiss bifold glass liftstrap doors that open to the four new outdoor practice fields covered in Kentucky bluegrass. Two fields are heated with 65 miles of underground tubing. The weight room spans over 6,100 square feet, featuring scores of racks, weights and other conditioning equipment. There is also a cardio mezzanine overlooking the weight room.

Vikings trainers indicated that time is a premium and that was something they took into consideration when deciding on bifold doors that quickly open, allowing players to the inside and outside of the weight room. They also like the indoor-outdoor feel that the doors give the facility.

The Schweiss bifold liftstrap doors are custom built to 20 feet, 1 inch by 13 feet, 8 inches, providing a clear opening height of 11 feet, 2 inches. They operate from top-drive motors and have electric photo eye sensors, manual latch systems and an emergency back-up system in case of a power outage.

Kraus-Anderson Construction Company of Minneapolis served as the general contractor on the project, while Crawford Architects LLC of Kansas City, Mo., was in charge of the design services. Across the building façade, CENTRIA’s Formawall visually striking insulated metal panels and IW series rainscreen panels contributed to more than 225,000 square feet of exterior cladding. The bifold doors were installed by Overhead Door Company of the Northland, of Eagan.

The facility was privately financed without public subsidies, by the team’s owners, the Wilf Family.

Along with the Vikings stadium, players will be treated with the very best, including:

A Vikings Hall of Fame and a store are open to the public. High School football, soccer and lacrosse games, as well as concerts, are held in the facility.

VikingsFacility2: Two Schweiss bifold doors in this state-of-the-art team facility open to four outdoor practice fields (two are heated, one is synthetic), a 6,500-seat outdoor practice stadium and to a field house with a 98-foot high roof for punting. Bergerson Photography photo

VikingsFacility3: The Vikings Twin Cities Orthopedics Performance Center campus sits on about 35 acres. It has an 88,000 square-foot treatment and sports medicine center on this Eagan, Minn., campus.  ©CENTRIA photo

VikingsFacility4 & VikingsFacility5: Before and after photos show the exterior of the closed bifold doors. The lower photo gives an indication of how close one of the practice fields is. Bergerson Photography photo

VikingsFacility7: The Schweiss bifold liftstrap doors in this weight room are each custom built to 20 feet, 1 inch by 13 feet, 8 inches, giving a clear opening height of 11.2 feet. They operate from top-drive motors and have electric photo eye sensors, manual latch systems and an emergency back-up system in case of a power outage. Bergerson Photography photo 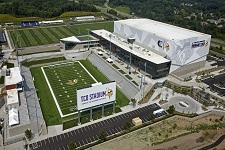 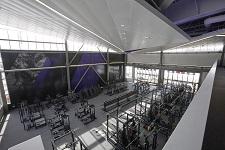