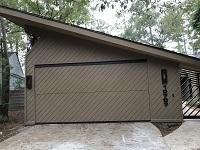 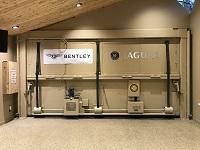 Bifold garage door from Schweiss Doors has the class to match cars kept inside
FAIRFAX, Minn., October 2, 2018 – As a 30-year pilot in the captain’s seat for Continental and United Airlines, Kirk Simonds has been a part of many successful landings. In retirement, his landing spot is in The Woodlands, Texas, about 30 miles northwest of Houston.

Simonds hired the services of Vanderwal Architects and contractors Harry Hammond and Brett Chamberlain to execute a complete remodel of his garage, which ended up with a Schweiss Doors 18-foot by 7-foot bifold liftstrap door. It’s equipped with an automatic latch system and remote opener. He can operate the door with his backup generator in the event of a power outage.

The backup generator nearly became the main source of power. The door was installed just before Hurricane Harvey started on its $200 billion wave of destruction when the eye passed over Rockport and Houston in August 2017. In nearby Spring, Texas, cars were floating and streets were flooded over 4 feet high.

“The water level came within six inches of entering the house,” Simonds says. “We had 47 inches of rain and 25-30 mph winds during that event. We got the door installed the night before the hurricane hit, so timing couldn’t have been any better. We’ve told neighbors that if there ever was another hurricane here, they are welcome to come and stay in our garage!

“I believe, initially, I found out about Schweiss through an Internet search for a bifold door. A lot of the examples that were illustrated there, I’d say 70 percent of them were labeled as Schweiss Doors. Highly impressed with the Schweiss doors, we did not do any further searching and got the specifications and price on the door.”

Having three vehicles and space for a two-car garage, Simonds decided to make the roofline higher on one side to facilitate a lift and make it a three-car garage.

“What I like best about my door is the mechanical operation,” he says. “It’s amazing and very well built. On a scale of 1 to 10, it’s an 11. I like to watch it go up and down, it’s very impressive and the structural integrity is just overwhelming. It surpassed my expectations. That is one heck of a door.”

Simonds, along with Hammond and Chamberlain agreed the door installation went well despite some challenges.

“Roy Weisinger was fantastic and chosen as our number one recommended installer from Schweiss Doors,” Simonds says.

“He was probably the easiest to work with and the best installer I’ve had in 45 years of construction,” added Hammond.

Simonds says it was great working with Jeremy and Brent at Schweiss Doors, the duo that kept him informed on delivery times. Simonds added the bifold door arrived in good condition and on schedule.

Woodlands_Garage1: Kirk Simonds of The Woodlands, Texas did a complete renovation from the slab up on his garage. Attached to the garage is an 18-foot by 7-foot Schweiss Doors bifold liftstrap door. The door is equipped with an automatic latch system and remote opener.

Woodlands_Garage2: The interior of the door was painted to match the inside of the garage. The roofline of the garage was built higher on one side to facilitate a car lift, making it a three-car garage.

Woodlands_Garage3: The exterior of the bifold door is clad with a diagonal pattern to match the rest of the garage. A roll-up door was not an option due to architectural control limitations – too industrial-looking. 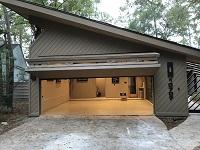