In 2014, staff, students and the community took part in the planning and designing of the new Sterling Aviation High School. According to high school Principal Justin Fuentes, there aren’t many high schools in the United States that offer this type of education, especially to the extent his school does.

“We are one of the few schools, if not the only school, that does the actual pilot certifications,” Fuentes says. “Two years ago, we had a graduate who was accepted into the Naval Academy. We do have a Naval Junior ROTC program here.”

Sterling’s Naval Junior Reserve Officer Training Corps (NJROTC) Detachment was first established on campus in May 1970. Graduating cadets incur no military service obligation, however, many have chosen to serve, covering every branch of the U.S. Armed Forces.

The new hangar is set up to hold two aircraft owned by the school. One of the Cessna aircraft is flyable; the other could be flyable in the future, but is used for students to learn the mechanics, repair and maintenance of the plane.

Thinking to the future and possible growth, the hangar design called for a door larger than presently needed. The bifold liftstrap aluminum frame door measures 49-feet, 6-inches wide by 20-feet, 2-inches high. It operates on a 460v 3-phase system with a top-drive motor. It has galvanized wind rails and side rails, a keyed switch entry system, electric photo eye sensors and is wind-rated for 120 mph. Two rows of six windows on each half of the door let in an ample amount of daylight. Cadence McShane Construction of Addison, Texas served as the general contractor on the project.

“It’s opening up to a new type of education,” Fuentes says. “It’s gigantic, truly massive, and how it folds up, I hadn’t expected that. I like the access it gives and think people will come just to see the door. People talked a lot about it during our grand opening, when masses of people walked into the building.”

Plans for the new hangar area may include technical labs along the side looking out into the hangar. Students can be in the classroom, work in the lab space and do work inside the hangar, which is very different from any other school Fuentes has seen.

“Opposite of the door is a glass wall, so anybody entering our building, the first thing they see are the airplanes in the hangar and the door behind them and the classrooms alongside,” Fuentes says. “So it’s really a showpiece for our school and what we are trying to do for our students.”

About 40 percent of Sterling graduates go directly into the workforce. The remainder go into the military or to universities and colleges. In 2015, the open enrollment school serving grade 9-12 registered 1,133 students, of which 99 percent were minority students. Fuentes estimates that 5-10 percent attend Sterling because of the flight program. He projects higher enrollment in the future.

In the high school aviation magnet program, students must take Federal Aviation Administration-approved base courses before being eligible to take up to 30 hours of flight time. Students may then take the FAA written examination.

“We do the training for the students to take the FAA examination, and then they do their actual piloting at a local vendor at Ellington Air Force Base,” Fuentes says. “In our classrooms, we have two moving flight simulators. One of them is a Redbird MCX full-motion simulator and we have several desktop simulators as well. By the time a student enters 11th grade, providing they pass the FAA exams, they start flying.”

The school’s control tower is not operational, yet, but Fuentes says plans are to have it linked to airwaves at William P. Hobby International Airport, located about a mile from the school. Currently, students can listen to control tower communication and see aircraft landing and taking off.

Texas_AviationHS2
Students in the Sterling Aviation Sciences Magnet Program prepare for a future in aviation beginning in ninth grade. By the time they are seniors they earn flight certification and can take private flight lessons with a certified flight instructor.

Texas_AviationHS3
The bifold liftstrap door has 12 windows that allow an ample amount of natural light into the hangar. Electric photo eye sensors were added to the 120 mph wind-rated door as an extra safety option.

Texas_AviationHS4
This student from Sterling Aviation School in Houston is training on the Redbird MCX full-motion flight simulator. They also have a Redbird MX2 simulator and several desktop simulators. By the time students reach their junior year in high school they are ready to be flight certified.

Texas_AviationHS5
The bifold liftstrap door is built on an aluminum frame with galvanized side rails and electric photo eye sensors. Top drive 460-volt 3-phase motors and strong liftstraps open the big door quickly and quietly. The door also is equipped with a keyed open/close switch. 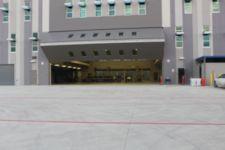 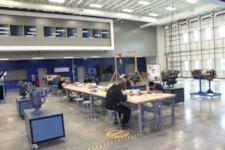 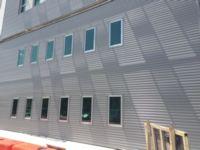 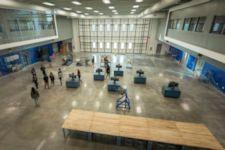 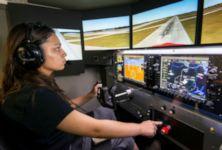