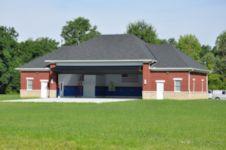 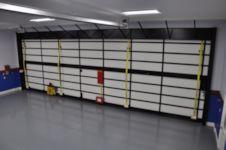 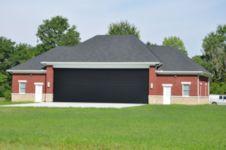 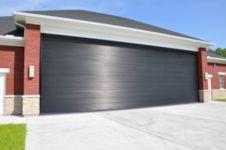 Strange says the neighbor was introduced to Schweiss Doors at the Oshkosh (Wis.) Air Show where he talked to company owner Mike Schweiss.

“I researched a lot of other hangar door companies, but along the lines of making the personal contact (with my neighbor) I was pretty much sold on Schweiss and went that way,” says Strange. “It wasn’t even a matter of cost at that point anymore. I went on the reputation that Schweiss has.”

Strange’s hangar required a 45-foot by 15-foot, 11-inch door to house his Cessna 182T, which he uses for business and pleasure. Bob Beckman of R.D. Beck Services of Harrison, Ohio, a Schweiss Doors installer since 1999, was able to fill the request. Strange wanted a Schweiss bifold liftstrap/autolatch remote opening door, with black horizontal corrugated sheeting on the face of the door.

“By mounting the sheeting horizontally, we were able to have the top corrugated panel of the bifold door overlap the lower panel,” Strange says. “When you look at the closed door, even when you are standing very close to it, the two-inch pattern appears to be seamless with no joint in the middle and looks more like a single panel hydraulic door. It came together perfectly. We couldn’t ask for anything better.”

Strange’s research and engineering background led him to select a bifold door over a one-piece hydraulic door because there is less surface area for windy conditions and when there is heavy snow. Another feature Strange insisted on was to have the door inset about two feet, instead of installing it on the face of the building.

“I wanted to do something totally different,” Strange says. “I kind of wanted to go beyond the typical look of an airport hangar door. I like the autolatches and remote opener. The batt-insulated door operates very quietly and is dressed up with a cedar interior trim to match the garage door.”

The inside of the hangar is painted in a patriotic red, white and blue with a large American flag on the back wall. Strange says he appreciates the sacrifices veterans have made, including his father, a Vietnam veteran. What he likes most about his door is the look.

“That’s because when it comes to the mechanics of it, the operation of the motor and everything else, there have been no issues with it whatsoever,” Strange says. “It’s like you don’t even think about the mechanics of it; it’s very sound, even the autolatching system. That’s why I haven’t added the foam on both sides of the door. It pulls so tight in, it’s pretty much sealed up already.”

When people ask Beckman why he installs Schweiss doors, he tells them, he’s got one on his hangar.

“I tell them that Schweiss is a phone call away with an outstanding support group that will help with any technical question or problem on the spot,” Beckman says. “I still have the old-style cable door on my hangar and it has never failed me, but since then, Schweiss has improved and added even more features to their doors. I tell customers and potential customers that Schweiss will always stand behind their doors.”

Beckman keeps busy with cable to liftstrap conversions. He recently replaced cables with liftstraps and autolatches at the U.C. Health Air Care & Mobile Care bifold door in Butler County. The concern was that with a door that opens up to 10 times a day, every day, it would break down sooner, so the conversion was an easy choice.

Strange_Hangar1: J.T. Strange of Goshen, Ohio, is in the process of building a new home at the Obannon Creek Aerodrome Airpark. His hangar, which will hold his Cessna 182T business and pleasure aircraft, is fitted with a Schweiss 45-foot by 15-foot, 11-inch bifold liftstrap door.

Strange_Hangar2: The top corrugated panel of the bifold door overlaps the lower panel, making it appear seamless when closed, like that of a one-piece hydraulic door.

Strange_Hangar4: The Schweiss wall-mounted control panel and bottom drive motor is at left. The autolatch system is located at the center of the door with autolatch arms at each side of the door. Liftstraps ride within metal kickouts.

Strange_Hangar5: J.T. Strange wanted his hangar to go beyond the typical look of an airport hangar door. He accomplished this by mounting the sheeting horizontally and by having the corrugated panel of the bifold door overlap in the middle. The door is also two feet inset.

Strange_Hangar6: When closed, it’s hard to tell if this is a one piece or bifold door even when you are standing very close to it.