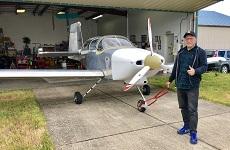 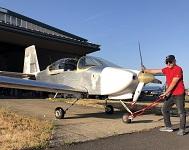 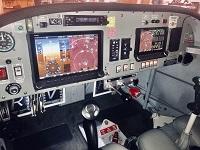 Oregon kit plane owner pleased with 12-year-old Schweiss Doors bifold door
FAIRFAX, Minn., September 2, 2021 – The owners of either a bifold or hydraulic door from Schweiss Doors often call or email the company years after a purchase to share accolades on their doors. Such was the case recently, with Ron Sterba, a retired telephone company employee from Salem, Ore., who passed on a “Hats Off” in his recent email praising Schweiss Doors for the many years of carefree operation he’s had with his bifold liftstrap door.

Sterba stopped by the Schweiss Doors booth at the February Northwest Aviation Conference and Trade Show in Puyallup, Wash., where he talked to company owner, Mike Schweiss. He was interested in and wanted some technical advice on how to add a couple of windows and a remote door opener to his Schweiss bifold hangar door.

“I took Mike’s advice about contacting Dave Schweiss for my question,” Sterba wrote in his email. “He, I might add, was spot on at providing superior service. I sent him pictures of my door, windows, dimensions and he called me right back to determine the best location and needed frame support. Hats off to all of you folks at Schweiss Doors! For 12 years of operation of my strap’s door; never did I need service of any kind. Thanks for an exceptionally well-built door. I promote your door as much as I can, no matter where I am.”

Inside his hangar rests his Van’s RV-9A, an American two-seat, single-engine, low-wing homebuilt airplane sold in kit form by Van’s Aircraft of Aurora, Ore. The RV-9 is the tail-wheel-equipped version, while his more popular RV-9A features a nose wheel. For most pilots, the RV-9/9A will do everything they want to do, at less expense and a much higher “fun quotient” than any competing design. The high-lift wing means it flies quite slow, enabling very short takeoff and landing distances with low fuel consumption.

Sterba soloed in a Cessna 150 after joining a flying club 48 years ago. He was a long-time member of the Valley Flyers (Blue Sky Pilots, Inc.) flying club.

The five-inch-thick cement hangar floor has in-floor heat tubing. It’s well insulated with six inches of high-density insulation panels and all the walls are sheetrocked and painted. Remote control LED lights cut the monthly electric bill. A stereo system with five speakers inside and a dedicated speaker for his aircraft radio add to the relaxed atmosphere in his mancave hangar.

Originally, Sterba had his eyes on a Schweiss hydraulic door, but changed his mind when he realized, due to the close proximity to other hangars, that when it was open, it could be in the way of passing aircraft.

“My hangar is ‘the unusual one,’” Sterba says. “Anybody who comes by my hangar notices I’m the only one here out of 25 hangars who has a bifold door. The other ones are push-sliders and they all wish they had what I have. A friend of mind has a bifold door with steel cables. My goodness, it is a lot noisier than mine.”

With the help of a friend, Sterba, an all-around handyman also known as “Mr. Gizmo,” installed a 37-foot by 12-foot, 9-inch bifold liftstrap door with automatic latches on his 50 by 39-foot hangar that was built by R&M Steel of Caldwell, Idaho, at the Salem Municipal Airport (McNary Airfield).

“R&M Steel told me I didn’t need to go anywhere else than Schweiss to get a quality door. The Schweiss door actually went up easy. We used a forklift and set the top half into the hinges and popped the pins in. Then both of us carried the bottom half of the door underneath the top half and popped the pins in there also. It was way too easy. When you build the building the right way, the door goes in well. The nylon straps stretched slightly, just enough to make a slight adjustment.

“What I liked best about the door is the automatic latching levers,” he continued. “They are very stout when you close the door. The construction of the Schweiss door is more durable than I expected. It appears the door was made to be of a high-strength lifting ability. The door doesn’t wobble, there’s no movement on it, it comes up easy and firm. Even if it’s windy out, there’s never any motion in the door, none whatsoever. We take the tables out there and enjoy watching planes on the field without getting wet.”

Sterba2: With the help of a friend, Sterba installed his 37-foot by 12-foot, 9-inch bifold liftstrap/autolatch door. He’s now in the process of upgrading it with a remote opener and thermal pane 17-1/2-inch by 41-1/2-inch thermal pane windows help cut down on electricity costs and add natural light into the hangar.

Sterba3: Ron Sterba soloed in a Cessna 150 after joining a flying club 48 years ago.

Sterba4: The dashboard of his RV-9A is equipped with the latest in avionics.

Sterba5: Ron Sterba noted that since he installed his bifold strap door 12 years ago, other than routine maintenance, he has not had to service it once. He promotes Schweiss doors wherever he goes. He especially likes the autolatch system.

Sterba6: The high-lift wings on the RV-9A enables it to fly quite slow with very short takeoff and landing distances and low fuel consumption. Sterba said during the 12 years he has owned his strap door he has had zero maintenance issues.