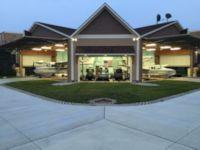 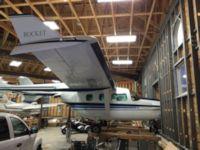 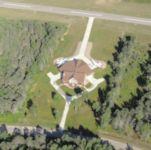 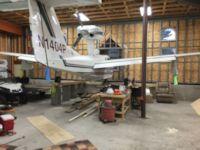 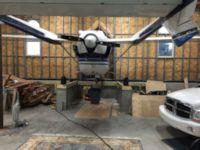 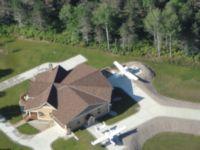 Efficient use of space possible through creative use of doors
Residential hangar stores two planes, cars, boats, snowmobiles and more!
HECTOR, Minn., November 13, 2015 – Making the best use of space in a hangar is a challenge. Tom Green of Marcelona, Mich., found the best solution for his two-plane hangar at his Lakes of the North Airport home.

From the air, Green’s hangar home is star-shaped, featuring the two 42x12-foot hydraulic doors from Schweiss. His planes enter the hangar and are housed on elevated tracks, three feet above the ground to allow more usable floor space in the hangar. The hangar and hydraulic doors, both at a 45-degree angle from the elevated taxiway, blend magnificently into the home.

Green said he was able to find a general contractor who was up to the creative challenge, but he had to explain his idea 50 times to subcontractors who worked on the building. The area behind the hydraulic doors and the garage doors houses two airplanes, four snowmobiles, four cars, two 24-foot boats as well as a 39x13-foot workroom.

Green, who has experience in a variety of cockpits in 45 years of flying, currently flies a Cessna T337 Skymaster and a Lake 240 Renegade six-seat amphibious hulled aircraft. When he was 15, he bought a 65-horsepower Aeronca Champ with no electrical system … Green’s parents had no knowledge of the purchase until it was completed.

“It’s one of those things, it’s in your blood somehow or another,” he says. “I played ball as a kid and then afterward I would look at the flying books. I’d lay in my backyard and look up at the Air Force planes going by and try to identify them, trying to guess when the sound barrier would break. After a while, I got to know just about every airplane there was.”

Green went with hydraulic doors over bifold doors because he needed the clearance and didn’t want the hangar any taller than needed.

“Some manufacturers’ doors moved in a way that wasn’t particularly attractive to what I wanted to do,” Green says. “There were others that were heavy and were hard to modify using sheeting on the outside in addition to the bump-outs (for the nose of the planes). I needed a very strong door to do that. I went to Oshkosh (Wisconsin, for the EAA AirVenture fly-in convention) and looked at every single door operator. Sometimes I would sit there for a half-hour and watch a door operate. Eventually I came to the conclusion that the Schweiss door had the greatest structural integrity to make this work. I’d seen Schweiss doors and others at a number of places. Before I could continue with building the home, I had to be absolutely convinced it was the right door.”

Green says the Schweiss Doors hydraulic doors operate smoothly and open to about 90 degrees, allowing his planes easy entrance, while being able to allow the entry of larger planes.

“What I did was take a 2,450-square foot hangar with 16 foot walls and hid it behind a 1,500-square foot home with standard 8-foot walls,” Green says. “You might think it’s impossible, but I’ve totally hidden that hangar and by using Schweiss hydraulic doors and modifying the front of the doors with little bump-outs. No one has any clue this is a hangar house.”

With the added weight of cladding and bump-outs on each hydraulic door, Schweiss Doors supplied a beefed-up cylinder lift system that handles the heavy doors smoothly. And with some creative planning and building, the hangar may be as space efficient as any other.

“I started looking at a hangar and how much wasted space there is when you try to put something in that is T-shaped,” Green says. “Everything in front of the wings is wasted space no matter what kind of plane you have. Anything behind the wings, whatever you put there, you have to move the plane to get it out. So I started thinking, ‘What if my goal was to make everything move in the hangar independent of everything else, what would it look like?’ The thought of moving things and having them come in at different levels kinda worked. I started testing by building ramps and I would inch my plane up on ramps at the commercial airport where I was hangaring my plane at the time. The further I got the plane in the air, I could see how it opened everything up.

“I realized that if I could move the plane forward, the space in front of the wing would be minimal. The whole nose of the planes sits outside the hangar and I built around it. The reason I used hydraulic doors is because they swing straight out. With this alcove, the door closes around it.”

Star_Hangar1.jpg: With the two 42 x 12 foot Schweiss Doors hydraulic doors and the conventional garage door open you can see how Tom Green is able to hangar his Cessna T337 Skymaster, a Lake 250 Renegade and other cars and toys into his hangar home in Marcelona, Michigan.

Star_Hangar2.jpg: An aerial view of Green’s hangar home shows the star-shaped configuration designed to make useful space of every inch of the 2,450 square foot hangar. A bump-out, shown directly behind the plane in the bottom portion of the photo, lifts with the Schweiss hydraulic door and when down it houses the nose of his plane.

Star_Hangar6.jpg: A side view shows just how far the nose of the Skymaster sits inside the bump-out door. Because of the added weight of the bump-out with decorative windows and exterior cladding, Schweiss Doors supplied a larger beefed up cylinder lift system to easily handle the heavy doors.

Star_Hangar7.jpg: An inside hangar view from the tail of the Lake 250 Renegade shows the configuration of the hydraulic door bump-outs and placement of the decorative windows.

Star_Hangar8.jpg: Two bump-outs that extend from the hangar home allow Green to tuck the front ends of his planes outside the actual hangar thereby giving additional room within the hangar. The bump-outs, lifted by strong cylinders, are part of the Schweiss hydraulic doors.