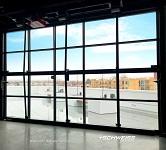 Schweiss Doors bifold door opens to performance center at high-tech Utah student complex
FAIRFAX, Minn., December 7, 2021 – One of the first things you may ask yourself when you hear about the Spy Hop Productions building at Salt Lake City, is “What is Spy Hop?” Sounds like something out of a James Bond 007 movie!

In the case of the new Spy Hop 25,000-square-foot digital media arts group building, the “look ahead, tune in” description seems to fit the best as it is geared as a student learning center. Unfortunately, with the ongoing Covid-19 situation, students had been taught online for an indefinite time.

“We serve students statewide,” says Kasandra VerBrugghen, Executive Director. “We may have kids in one program that are coming from 10 different schools. Right now, we are working with about 100 kids. Typically, we see upwards of 18,000 kids a year and travel all over the state of Utah. We have 26 staff members. We also work in-school and after school, predominantly with teenagers, but also with elementary kids as well.”

Spy Hop is an independent nonprofit youth digital media arts center that offers in-school and after-school youth in-care and satellite programming for students ages 9-19 of all skill levels. Built by Okland Construction of Salt Lake City, Spy Hop was recognized by Utah Construction & Design as one of the year’s Most Outstanding Projects. Engineering News Record (ENR) regional editors selected two companies for 2020 Contractor of the Year honors. Okland Construction received one of the two awards in the Intermountain area. Atlas Architects, also of Salt Lake City, was assigned to do the design work.

“In the new building, because we have more space, we will be able to double-up and offer more programs,” VerBrugghen says. “We just started a new virtual reality online radio podcast program. The (Schweiss) door is part of our event stage called, ‘The Rooftop.’ When that door is open, the patio performance area is open to the indoor area that is about 4,000 square feet and the patio area is about 3,000 square feet. The door opens that whole space up, giving a beautiful view of the mountains. We’ll be using it for student showcases, performances, screenings and so forth.

“This door made sense because it allowed for a more open, efficient and practical space and a canopy. We’ll be able to rent that space out to other community-based organizations. It will serve as an earned-income source for us to help pay for the operating expenses of the building.”

She says the door is very utilitarian with a simple industrial design and clean look that aligns well with the building.

“The enclosure for the inside event space is also one of the apertures that opens out onto the rooftop deck,” Foster says. “You typically see these large doors down at street level.”

Foster says this area has multi-functional properties – anything from renting the space out for a wedding with table seating inside, corporate lectures, fundraisers with indoor or outdoor seating or for Spy Hop concerts and youth events, such as film premiers and other performing student activities.

“In order to have those two spaces working together is why we chose to have this type of aperture,” Foster says. “It presents something that both looks good and functions how you want it. This is a big opening and a typical rollup door just doesn’t look good. In our climate here, spring and fall are really beautiful, we probably have a good eight-month season for usability of that door. The nice part, too, even if it’s raining, it provides a protective edge canopy.”

Foster says they researched what type doors were available before deciding on Schweiss.

“There are not a lot of players in this field, let alone manufacturers that can incorporate a glazed system within their unit,” he says. “Many don’t have the ability to customize. This door looks terrific and operates very nicely for a very large door.”

“One of the advantages to the install was we ended up raising the height of the door wedge during the build,” Bithell says. “The flexibility of the motors was a big plus for us. When we realized the bifold wedge was going to take up 30 inches, we found we had room to spare, so we bumped it up as high as we could. It was great that we had the option of doing a horizontal motor to gain that height. Having Brent (at Schweiss Doors) adding the extra 18 inches made a big difference.”

SpyHop2: Opening the door increases the roof area to 7,000 square feet of usable space for students to perform before large crowds. The rooftop space will also be rented out to the public or corporations for various functions, which in turn helps defray the cost of building operating expenses. (Photo by Scot Zimmerman Photography)

SpyHop3: From this vantage point it also gives a nice view of the Wasatch Mountain range that runs east and north, and the Oquirrh Mountains to the west. (Photo courtesy of Spy Hop)

SpyHop4: An expansive window area and glass cladding brings in available light to the 4,000-square-foot indoor performance area while maintaining a nice view of the outside. Black liftstraps blend in nicely with the designer door. (Photo courtesy of Spy Hop)

SpyHop5: Some of the indoor ceiling lighting can be seen in this photo of the interior third-floor performance center. When the bifold door is open it provides a nice canopy for rooftop performers. The bifold liftstrap door latches weathertight when not in use.

SpyHop6: Students up to age 19 at Spy Hop have a great year-round view of the mountains and are able to learn digital media arts platforms such as iTunes, YouTube, Vimeo, Spotify, radio, TV and many other formats. (Photo courtesy of Spy Hop)

SpyHop7: This Atlas Architects rendition of the building at night shows how visitors and performers at Spy Hop have a beautiful view of the mountains. Because of the moderate climate, Spy Hop will be able to use the bifold door about eight months of the year.

SpyHop8: The bifold glass designer door can be seen from street level when open. The Spy Hop Productions building was recognized by Utah Construction & Design as one of the year’s most outstanding projects. Okland Construction was recognized for 2020 Contractor of the Year. (Photo by Scot Zimmerman Photography) 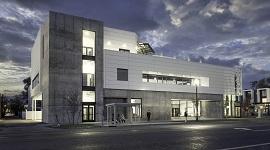 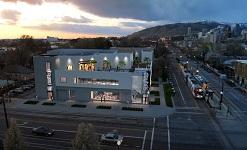 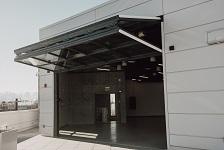 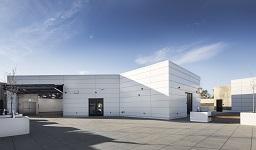 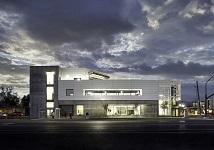