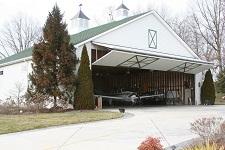 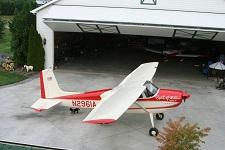 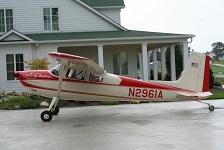 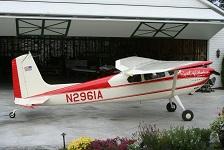 Tennessee barn hangar holds replica of Spirit of Columbus
FAIRFAX, Minn., January 3, 2019 – Driving up and seeing Dick Merrill’s wood-frame barn the first time, you’d never guess that it is almost exclusively used to hangar his 180 Cessna Spirit of Columbus and that over half of the end wall has a bifold door on it.

The 60-foot by 80-foot hangar is nestled in the Smoky Mountains Hensley Airpark, two miles south of Chuckey, Tenn. It features a Schweiss Doors bifold liftstrap door, measuring 50 feet by 15-1/2 feet, with photo eye sensors, auto latches, remote opener and emergency backup power system. The exterior of the barn and outside of the bifold door is clad in HardiePlank lap siding that matches the adjacent home.

HardiePlank siding, also known as cement board siding, has been around a long time. It’s a low-maintenance, long-lasting material that is completely rot and insect resistant. It’s made of 90 percent sand and cement, making it fire resistant. It’s also very heavy – Merrill estimates the bifold door with HardiePlank over OSB sheathing weighs approximately 10,000 pounds. The strong liftstraps give him peace of mind, knowing the door is safe and secure. Since he purchased the door, he replaced the cable latch system with the straplatch system.

“The automatic latch system is great,” Merrill says. “I can sit here in the house with  theextra remote and close the door when I want to, and it latches fine. My neighbor has a manual latch and he’s quite happy with that. I like the fact that the door blends in so well with everything. The best thing I like is the remote and the fact you have to hold the button down to go up and down, eliminating the worry about it coming down on something.”

His wife, Ginger, designed the hangar along with the contractor, Smucker Builders of Chuckey, to put the crossbuck doors on it.

“Most of the barns around here don’t have any paint on them,” Merrill says. “The bifold door came with a stronger frame because we were going to put Hardie board on it. With the five strong straps, I figure I can walk under it with no problem. We built the hangar bigger than it really needed to be when one of the guys said, ‘Build it bigger than you think you want because you’ll grow into it.’”

Merrill says he was tempted to get a Schweiss hydraulic door, but decided to go with the bifold door which allows him to park closer to it. He briefly considered a door from another manufacturer, but wasn’t impressed.

“What sold me on Schweiss Doors was when I was at an airport in Fredericksburg, Texas, some years ago,” he says. “The 180 Club had a fly-in there and they had put in a new string of T-hangars that all had bifold doors with straps. It looked like a so-much better idea. Their doors got used pretty heavily. I’ve been to Oshkosh and talked to Schweiss there.”

He’s been flying since 1959, learning in a Cessna 172 at the age of 16. Ginger is also a pilot, previously owning and flying a light sport cruiser, marketed by Piper. Dick has had his Cessna 180 for 38 years, making the purchase in 1980 from a listing he saw in Trade-A-Plane. Merrill has since applied the paint scheme to his plane to match the Spirit of Columbus, a 1953 Cessna 180. It became famous when Geraldine “Jerrie” Fredritz Mock piloted it as the first American woman to make the solo flight around world in 1964. That plane has since been featured at the Smithsonian Institute and other notable places. Mock, who completed the 23,000-mile flight in approximately 29 days, was awarded the FAA Gold Medal for Exceptional Service in 1964 by President Lyndon B. Johnson and the Amelia Earhart Memorial Award among others.

Merrill obtained permission from Mock to replicate the look of her Cessna. She asked to see it when it was finished, but unfortunately, she passed away before he had the chance to show his freshly painted 180. Her family asked Merrill to participate in the scattering of Mock's ashes from his plane over the Gulf of Mexico.

Merrill speaks well of his strong bifold door and has an even better story to tell about his Cessna 180, which he flies as a tribute to Mock, promoting aviation history.

To read the entire story that appeared in the March/April 2016 edition of Vintage Aircraft Magazine about Mock and how Merrill came about obtaining and replicating his plane, click here: http://eaavintage.org/spirit-of-columbus/

Photo 3: Coming up on this barn it is hard to tell that it is actually a hangar. The hangar is nestled in the Smoky Mountains Hensley Airpark south of Chuckey, Tenn.

Photo 4: The Merrill 60-foot by 80-foot hangar has enough room to store more than one aircraft. The bifold door, when open, provides a nice shaded canopy.

Photo 5: The exterior of the bifold door and hangar are clad in HardiePlank® lap siding that matches Dick and Ginger Merrill’s adjacent home.

Photo 6: Merrill said he was tempted to get a Schweiss Doors hydraulic door but decided to go with the bifold door because he is able to park closer to it. 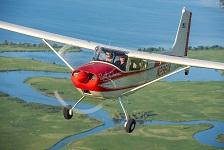 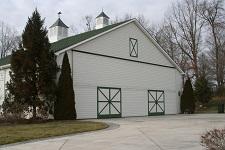