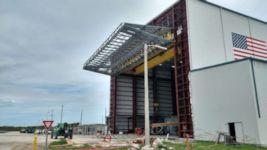 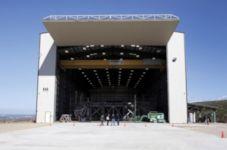 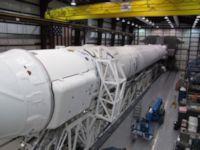 Schweiss Doors delivers bifold doors to Cape Canaveral rocket storage facility
Size definitely matters when doors allow building access for rockets
HECTOR, Minn., September 10, 2015 – You’ll probably never be called on to install a bifold door that weighs more than 50,000 pounds, but wouldn’t you want to work with the manufacturer that can boast such an incredible accomplishment?

Schweiss Doors recently produced two bifold doors for a new steel hangar at Cape Canaveral, Fla. One door was 40 feet wide and 69 feet tall. The larger door was 90 feet wide and 61 feet tall. Both were equipped with automatic latches and are wind-rated to 150 mph. Upon delivery to Florida, both doors were clad in 26-gauge sheeting and feature 4-inch blanket insulation. Bottom-drive 480-volt 3-phase motors and patented Schweiss liftstraps do the lifting of these doors that exceed 53,000 pounds!

These doors are similar in size and requirements to prior Schweiss bifold doors installed at SpaceX sites in Waco, Texas and Vandenberg Air Force Base, California. SpaceX has developed expendable rockets able to deliver cargo to the International Space Station and is working on providing satellite launch services, passenger tourist flights and cargo delivery to orbit … sooner than you think.

“SpaceX is like Special Forces,” says Elon Musk, SpaceX CEO & Chief Designer. “We do the missions that others think are impossible. We have goals that are absurdly ambitious by any reasonable standard, but we’re going to make them happen. We have the potential here at SpaceX to have an incredible effect on the future of humanity and life itself.”

SpaceX, or Space Exploration Technologies Corporation, is a space transport company headquartered in Hawthorne, Calif. The SpaceX launch manifest is populated by a diverse customer base, including space station resupply missions, commercial satellite launch missions and U.S. Government science and national security missions. With the elimination of NASA funding, SpaceX has moved to the forefront of space exploration.

Cape Canaveral, on the southeast coast of Florida, provides access to a wide range of low and medium inclination orbits frequently used by communications and earth-observing satellites and by supply missions to the International Space Station. The site also allows access to geostationary orbits as well as departures to the moon and interplanetary destinations.

Schweiss Doors is happy to be a part of the innovation. Doors ordered by SpaceX are not run-of-the mill doors. These doors had plenty of specialized requirements that Schweiss Doors had to conform to.

SpaceX2: The COTS 2 Demo Dragon sits alongside a Schweiss Bifold liftstrap/autolatch door as it undergoes launch prep at the SpaceX hangar in Cape Canaveral, Florida. These doors were ordered for the Cape in 2008 and since then others have been installed in Waco, Texas and Vandenburg AFB, California.

SpaceX3: Men standing in front of one of the SpaceX hangars in Cape Canaveral give a good indication of what a Schweiss custom-made 90 foot x 61 foot tall bifold door actually is.

SpaceX4: Prior to attaching the exterior sheeting and insulation, the large door is put through a test run from top to bottom to ensure it is in working order.

SpaceX5: A lot of steel went into this 90 foot x 61 foot door weighing in at 53,000 pounds with attached sheeting and insulation. A dual-autolatch system closes it securely to the space hangar. The huge door required four powerful bottom-drive motors and 31 liftstraps capable of lifting more weight. Five internal and one external truss add to the stability of the door.

SpaceX7: When the largest Schweiss bifold liftstrap door is open all the way it has a 52 foot clear opening.