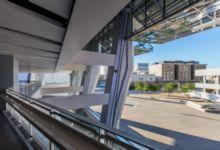 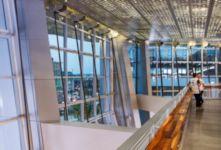 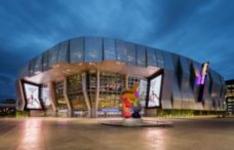 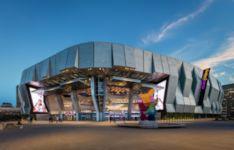 The 17,500-seat arena will host concerts, conventions and other sporting and entertainment events. It features more luxury suites and a potential capacity of 19,000 seats.

“We were honored and proud to have had the opportunity to do a designer door project of this magnitude at the Golden 1 Center,” says Mike Schweiss, owner of Schweiss Doors. “It’s one of the finest modern state-of-the-art entertainment venues in the world.”

Three motors, housed in the ceiling, require 480V, three-phase, 50-amp electrical power to raise the doors quickly, quietly and safely. The doors are glazed with a low-E safety-laminated glass. Three doors face down at an 11-degree angle to make them partly self-shading and to prevent unwanted reflections. The doors also can be controlled by an iPhone app.

How it all started

Design Principal architect Rob Rothblatt of AECOM Architecture in Los Angeles, visited the Schweiss Doors factory, accompanied by a draftsman, to get a better handle on how Schweiss designs and builds its doors. The meeting included a preliminary exploration of the door details and the scope of the project. Sold on Schweiss, Rothblatt returned to California and worked with a team of architects to design what was required of the doors.

“We challenged Schweiss to do things they had never done before,” Rothblatt says. “One, they are canted on an 11-degree angle, they are not battered. They are not the same length, two of the doors are angled and three doors are straight, meaning they don’t travel the same distance and they don’t stack exactly the same way. We challenged Schweiss to make that work and they did.”

Schweiss Doors provided some budgetary figures and the project was a go. “They liked what we had and decided we were the best company to design these five large stadium doors for them,” Schweiss says. “It was a very fun and uniquely formidable project. We have manufactured thousands of doors through the years and these doors were by far unique in so many ways; one being the doors were angled from the stadium. Our Schweiss design team spent many challenging hours figuring out a method of closing the doors against the structure. We worked on the Kings Stadium door project for eight months.”

More challenges
AECOM’s client wanted something uniquely Sacramento. The city was replacing a failing mall and needed to renew a failing district for rejuvenation of the area. It involved working with the wonderful temperature, being able to have indoor-outdoor expression and it needed to meet the stringent California Title 24 Energy standards.

“We are the first LEED Platinum arena in the whole world,” Rothblatt says. “NBA Commissioner Adam Silver said that Golden 1 Center is the ‘gold standard’ of arenas, and Schweiss Doors is a part of that. No one has ever done an arena with doors like this. The (Minnesota) Vikings have these 90-foot high swivel doors, but they are a very different thing. Part of being uniquely Sacramento is to be kind to the flora and fauna and celebrate farm-to-table and the delta. We are absolutely state-of-the-art in bird protection; it’s partly because of the doors. We don’t have any reflective glass. We have fritted glass and small panels that allow birds to see ahead of them. The Schweiss doors are glazed with gray glass, so birds will never bang into them by mistake. We’ve had no crashes at all.”

These doors are also windows, with another set of conventional pedestrian doors at the base to handle foot traffic entering and exiting the arena. The first piece of the six-story bifold door was tested over a couple months' time to make sure it was functioning properly before glass was installed by Bagatelos Architectural Glass Systems of Sacramento.

Installing was a challenge
Bill Schmidt Construction of Maxwell, Calif., has a lot of experience with the installation of Schweiss Doors products and was charged with the three-month installation of the five doors at the Golden 1 Center.

“It was pretty hard,” says Bill Schmidt, CEO of Bill Schmidt Construction. “We had to use a chain hoist and a forklift because of the weight limitations on the concrete. The plaza level is on the second story and it’s just decking and concrete. We had six people at one time drilling all the holes. The headers were box headers with center webs in them; we had a one-inch plate to drill through, three holes per bolt. The side rails were hard to do because the doors weren’t vertical, but leaning out 11 degrees. The engineers put thicker side rails on than normal.”

There was a strong emphasis on working safely, resulting in plenty of paperwork.

“Just knowing that I did these doors is what I like most about the doors,” Schmidt says. “It was the first of its kind with the top-mounted autolocks on these doors. It was hard because no one had ever done it before. They are fantastic doors that make the stadium top of the line. The doors make the arena, that’s what everybody talks about. It was a one-of-a-kind project that was hard from everybody’s standpoint: engineers, architects, installers. It was really challenging.”

Schweiss Doors was the only choice
“I looked at several door companies and during the interview process, Schweiss basically said, ‘OK, you want something atypical, it’s a challenge, but we think we can do it.’ Everybody else dropped out,” Rothblatt says. “Schweiss won the project by being willing to take the risk and doing something architecturally challenging. The other companies couldn’t do a bifold door like Schweiss and they wanted to charge us $60,000 upfront in engineering costs on a door they didn’t even think they could do. We said no to the engineering cost.

“We also needed lights that could shine down on the plaza and when the doors folded; that was perfect. We lobbed some grenades at Schweiss, and this is going to set the standard for some time to come. These doors are monumental. That doesn’t mean they are large. The Schweiss doors are perfect. I say, let’s make it twice as big next time!”

Rothblatt says the huge mobile door panels are central to the architectural design, merging indoor and outdoor life while ventilating the arena. The bifold doors at the entrance allow the Delta Breeze to serve as a natural cooling system, pulling air in through small vents found under the seats in the stands. The doors can open to turn the venue into an indoor-outdoor arena and the “smart turnstiles” allow fans to enter at more than triple the usual speed.

“What I like most is that when you open the doors and stand on the balcony, you don’t know if you are inside or outside the building,” Rothblatt says. “That is just fantastic! Second, they are really dynamic. You watch them move, they make it feel like something that is movable and mobile and what we think about as a 21st century thing. They also have an industrial feel to them, which is perfectly cool for an arena. They look great! They are exactly what I was expecting and when they are closed, they fit in really nicely with the quality of the rest of the building."

The Kings have had discussions with the league about what conditions need to be met before they could play a game with the doors open and they believe it will be able to control the temperature, humidity and wind enough to make conditions on the court comparable to a full-indoor arena. The team held practices with the doors open to gather data.

The doors also provide a unique setting for concerts, as concert-goers will be able to stand outside and hear music from the plaza connected to the 16-story mixed-use Downtown Plaza Tower.

Greenest arena in the world powered by solar energy
Perhaps most important to Kings owner Vivek Ranadive are the environmental benefits that make it the first indoor venue to receive LEED Platinum certification — the highest level of recognition for environmentally conscious buildings.

The arena will be the first professional sports venue powered completely by solar energy. It’s estimated it will save about one million gallons of water a year compared to a typical venue of its size.

Golden 1 Center has many first-of-its-kind features, along with some of the modern accouterments that have become commonplace. Smartphone apps will allow fans to order food or watch replays from their seats, giant screens to watch the game and high-speed connections will let fans post photos almost instantaneously.

Befitting a team owned by a tech mogul who made his billions in Silicon Valley, the arena was built with enough technology to “future proof” it. It has enough bandwidth for a small city, allowing fans to post 250,000 Instagram photos per second and 500,000 Snapchats per second.

“We felt we had to set a new bar,” Ranadive said. “We have to be cognizant of the kind of planet we want to leave our kids and next generations. This had to be the greenest arena ever built. I fully expect that arenas in the future will be even better, be even more sustainable. Hopefully what we have here is an example of how to build a great arena and still be responsible to the environment.”

The arena is part of a $1 billion development project that includes 1.5 million square feet of mixed-use property that will have a hotel, restaurants, retail shops, offices and condos. About $500 million in outside investment is also expected in the area.

The arena will employ as many as 2,000 workers on event nights. Approximately 4,000 sheet metal installers, electricians, plumbers and other construction workers participated in the erection of the arena.

The city of Sacramento will pay $18.3 million each year to help fund the Kings’ new $557 million downtown arena – a financial burden that won’t expire until 2050.

Golden1Center1
The new Sacramento Kings Golden 1 Center seats 17,500 in its modern arena. Schweiss Doors engineered and built five bifold, straplatch main entrance doors, made of a combination of steel and aluminum frames. Three of the doors measured 29 x 41.5 feet and the other two are 29.4 x 41.5 feet each with respective clear openings of 32 and 28.8 feet. ©Paul Crosby Architectural Photography

Golden1Center2
Three of the doors face down at an 11-degree angle to make them partly self-shading and to prevent unwanted reflections. When open, the doors will allow the Delta Breeze to serve as a natural cooling system, pulling air in and down and then up through small vents found under the seats in the stands.  ©Paul Crosby Architectural Photography

Golden1Center3
Visitors to the stadium on the second story plaza can look through the bifold glass doors to the city outside. The Sacramento Kings doors are glazed with small fritted glass and low-E safety laminated gray glass non-reflective panels to prevent birds from flying into them.  ©Paul Crosby Architectural Photography

Golden1Center4
The bifold doors can open to turn the venue into an indoor-outdoor arena with “smart turnstiles” that allow fans to enter at more than triple the usual speed.  ©Paul Crosby Architectural Photography

Golden1Center5
Each of the bifold canopy hangar-style doors with glass cladding weigh in at about 28,000 pounds each and are lifted by three 5 horsepower motors. The liftstraps are 6-inch width compared to the usual 3-inch width normally used on most Schweiss bifold door projects. ©Paul Crosby Architectural Photography