Schweiss Doors provides door of choice for American champion
Former snowmobile racer stands by bifold doors for machinery buildings
HECTOR, Minn., January 6, 2016 – How champion snowmobiler Frans Rosenquist got his start in farming back in the late 1970s is a bit unusual. How he came to rely exclusively on doors from Schweiss Doors for his farm's outbuildings is completely typical.

Unlike so many farmers who work the same land as their fathers, grandfathers and even their great-grandfathers before them, Rosenquist used the proceeds from a super-successful career as a professional snowmobile racer to purchase his farm. That is not to say, however, Rosenquist didn't have farming in his blood from well before that.

“I started farming on my own in 1978. When I was right out of high school, doing road construction, I helped my step dad farm his 160 acres,” Rosenquist says.

The size of the farm he worked back in those days is a far cry from the 6,000 acres he and his family — wife Debbie, son Jason and son-in-law Brandon Barber — now tend north of Atwater, Minn., where they grow corn, soybeans, peas and sweet corn.

“I bought my first tractor and equipment with racing money," Rosenquist recounts. "I raced professionally for the snowmobile manufacturers starting when I was about 19 years old."

During his nearly two-decade-long professional career, Rosenquist established himself as one of the sport's all-time greats. In 2006 he was inducted into the National Snowmobile Hall of Fame in St. Germain, Wis. One of the Ski-Doo sleds he raced back in the day is on display there too.

"I started racing in the early 1970s and signed my first contract in 1977 with Yamaha snowmobiles," he said. "I took that contract money and went out and bought a new International tractor, plow and digger … and paid cash for it. Every weekend I’d go to the races and come home with about $3,000 to $5,000. We flew all over so I didn’t have any expenses; I gave a portion of my winnings to my mechanic. I raced in Alaska and won a race in Finland worth $10,000. Coming back from that race, I bought a new corn planter. I kept doing this, got married and rented a 240-acre farm that I now own.”

Rosenquist's sled racing career lasted until 1985. He announced his retirement after qualifying for the World Championships for the sixth time. He returned to the sport briefly in the 1990s, competing with his son, but the two have since drifted from snowmobile racing into tractor pulling. Competing as a team, Frans and Jason have a 2500-horsepower Case IH 305 Magnum tractor dubbed "The Gold Rush.” With Jason typically at the controls, they enter about 15 events per year and have won many events.

“At first I never drove it, Jason always did," the elder Rosenquist admits. "I told him at the last pull that I wanted to drive; I’m not getting any younger, I could have a heart attack tomorrow. I got on it and killed it right off the bat. You get two tries; Jason jumped up and said 'open this thing wide open, it has to be screaming when you let the clutch out.' I did and the front end came off the ground and I put about 60 feet on the next guy and won my first race. It was pretty cool.”

As the Rosenquists farming operation grew, they needed buildings to house an expanding line of equipment. Those buildings needed quality doors. That's how they came to be customers of Schweiss Doors.

“The first bifold door I ever had was a cable door that came out of Wisconsin," Rosenquist recalled. "We hadn’t run it for about a month and the dang cables broke. I called the manufacturer and he told me that they updated their door, but they weren’t going to stand behind my door so we put our own bigger cables on it and kinda fixed it ourselves. The door was sprung and never worked right. I had my fill of that company, so I bought my first Schweiss bifold door and it worked so good. So every time we built a new building or updated another building, we put a Schweiss door on it. We replaced that troublesome cable door with a new Schweiss door with a walkout door,” he added.

Rosenquist Farms now has four Schweiss bifold/liftstrap doors with autolatches. The largest is 45 feet wide x 17 feet high with a remote opener. Windows were added for aesthetics and to bring daylight into the building. The other three doors range in size from 31 to 33 feet wide and are up to 16-1/2-feet tall. Two of these doors replaced sliding doors on existing buildings.

Rosenquist said he no longer shops around for doors when the need arises because he's convinced the doors from Schweiss are the best on the market. He said he saw them on display initially at a Minnesota farm show but remembers the Schweiss name from well before because his dad had a Schweiss Chicken Plucker.

He’s impressed with how easy the doors are to run, and how quiet and smooth they operate. When he purchased his first Schweiss door he wanted a door that was efficient, didn’t break down and always worked. And that's exactly what he got. He was impressed with the installation too. The Schweiss Doors crew came when they were supposed to and left with everything working as it should.

Photo 1   Frans Rosenquist is now out of the snowmobile racing game, but he and his son, Jason, use this souped up 2,500-horsepower Case IH diesel named “Gold Rush” in about 15 events during the year.

Photo 3   The Rosenquists have four quad-track Case IH tractors to use on their 6,000 acre farm.

Photo 5   A heated shop is ideal for preparing and fixing up farm machinery for planting and harvest.

Photo 6   The largest of Rosenquist Farms four bifold doors is a 45x17 foot clear door with remote opener. The other three vary in size from 31 feet wide to 33 feet wide. 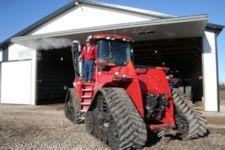 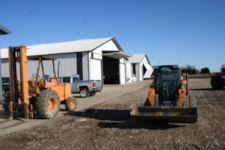 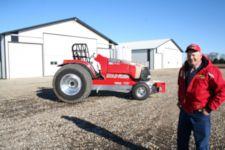 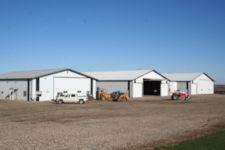 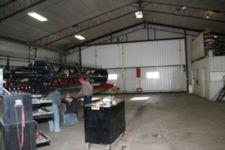