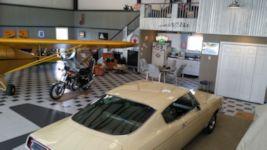 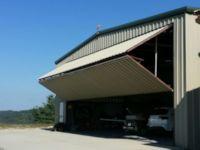 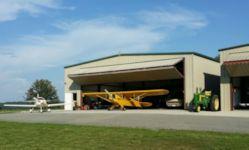 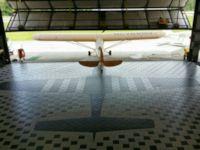 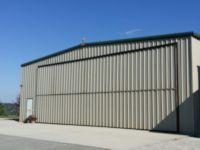 Schweiss Doors ‘just made so much sense’ to Tennessee pilot
Aeronautical engineer also has built neighbors’ hangars with Schweiss doors
FAIRFAX, Minn., November 10, 2016 – Taking advantage of some down time, pilot Larry Robbins is enjoying hanging out at home in LaFollette, Tenn., where he has access to his airplanes in a subdivision with its own landing strip.

“The straps just made so much sense to me,” Robbins says. I was the first one on this field to have a Schweiss door. When I built my hangar, I also built another one for a friend who also has a Schweiss door. A few years later I built a hangar for another friend and it has a Schweiss door on it. Now there are others here that have Schweiss doors on them. I looked at one other manufacturer’s door that had a design that would go up higher, but it didn’t do anything for me. My door has been working well for me, it’s quiet and goes up and down when I ask it to.”

When Robbins isn’t helping neighbors in his unofficial role as a Schweiss distributor, he works as an independent contracted systems engineer. He spent 10 years, most of it on the road, supporting the development of the Boeing 787 Dreamliner. Now, his time off gets him back to his Deerfield Resort subdivision, nestled between the Cumberland Mountains and the foothills of the Great Smoky Mountains on the peninsula of Norris Lake, north of Knoxville, Tenn.

Parked within the hangar are his 1946 J3 Piper Cub and Glasair 1 experimental that he built himself. Robbins' “Pilot Cave” is something to behold. The entire 3,600 square feet of floor is tiled and has a full-scale inlaid replica of a P-51 Mustang complete with machine guns taking center stage. He said he wouldn’t have tiled the floor but did it because he called "the world’s worst concrete job" put in by a young local company. Also in his hangar is a 1969 Plymouth Barracuda Fastback with 28,000 miles on it. A Barracuda also from 1969, was his first car.

In 1980, the kitplane industry was revolutionized by the introduction of the Glasair, the world’s first pre-molded composite kitplane. The Glasair is an ultimate high-performance aircraft. With its Lycoming engine, the Glasair is a fast, sleek, aerobatic machine that will take passengers across the country at a maximum speed of 260 mph in mere hours. Glasair kits have been delivered worldwide.

“I built it in my basement,” Robbins says. “I quit keeping track of time when I saw how long it was going to take. It was a 10-year project from start to finish. We used to live in Rockford, Ill., and relocated to the Atlanta area. The plane was maybe about half done. I loaded it on a trailer behind my car. At every gas station I stopped at they wanted to know if anyone was hurt. The time that you are building something like that you’re dreaming about the day you will have it done and be able to take off and go where you want to go. I sat in the airplane and thought, ‘My Lord, what have I done.’ It doesn’t have the potential to hurt anyone until you rev up the engine and pull back on the stick — it went fine. It was kind of like your first solo; you’ll never, ever forget it.”

But it’s the J3 Piper that commands the most interest in this story.

“My dad bought it in 1955 for $175 — the whole thing, including the engine. It had been sitting on floats on the Illinois River when a storm came through and blew one wing down into the river. It was fetched out of the river and taken apart. Dad bought it as a basket case. Later on when dad told me where he got it and how much he spent, I told him he should have bought the floats; they were a set of EDO 1320s, which would be worth as much as the airplane today. Dad said he didn’t have $175 for the airplane and they wanted $500 for the floats,” recalled Robbins.

His dad spent a couple of years, part time trying to reassemble it. When he ran out of time and money he hung it up in the rafters of his farm machine shed. It hung there for years and years until Larry was about a year from graduating high school. Over the three years he was attending aviation school they cleaned it up together and it’s been flying ever since 1975.

“Dad was one of those proverbial student pilots who never got his pilot’s license,” Robbins says. “Every now and then he’d pull the Cub out, we had a strip on our farm, and fly it around. I said, ‘Dad, you really ought to get your license.’ He responded by saying he was just flying it over his own property.”

Larry Robbins of LaFollette, Tenn., has his 1946 J3 Piper Cub and his Glasair 1 experimental parked outside his 56- x 60-foot hangar. The hangar has a 44-foot x 14-1/2-foot Schweiss bifold liftstrap door.

Robbins is proud to show off his customized “Pilot Cave.” The hangar has beautiful tile flooring and room for his two planes and his 1969 Plymouth Barracuda Fastback.

The 44-foot bifold liftstrap door provides a nice shaded canopy for his hangar when opened. He stores his J3 Piper Cub, a Glasair 1 Experimental plane and vehicles inside.

The entire 3,600 square feet of hangar floor is tiled and has a full scale inlaid replica of a P-51 Mustang complete with machine guns taking center stage.

Larry Robbins and his wife, Karen, pause for a photo at the 2016 Oshkosh Airshow. His love of aviation at a very young age led him to pursue a career as an Aeronautical Engineer.

Robbins checked out other manufacturers before deciding on a Schweiss 44-foot x 14-1/2-foot bifold liftstrap door for his new steel hangar. The door has autolatches and a remote opener.