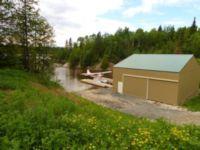 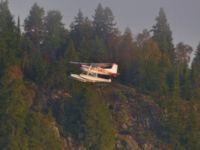 Pilot happy with hydraulic door from Schweiss Doors
Illinois natives settle in Ontario with Cessna 185 floatplane
FAIRFAX, Minn., April 6, 2016 – Lured by a love of fishing and hunting, Steve and Ellen Riggins purchased a cottage north of Dryden, Ontario, in 2003 and made the permanent move in 2007. Another hobby – flying – led the Illinois natives to build a hangar for a Cessna 185 floatplane, complete with a hydraulic door from Schweiss Doors.

“We’re now permanent residents in Canada,” Steve Riggins says, “but I still have the farming operation in Illinois and go back there for planting and harvesting seasons. My wife and I are both outdoors people and have fished in Canada for years. Canada just seemed like a good choice for us to go where he have unlimited fishing and hunting opportunities. There’s almost as much water as there is land and there are moose up here, something we didn’t have in Illinois. Alaska was our other choice; we would have looked at it further if it hadn’t been so far away.”

When he first arrived in Ontario, Riggins hangared his plane at Dryden Regional Airport. When the family made the move to Inorwic Lake, he worked on plans for his own hangar. His experience with hangars and with his farm buildings provided some knowledge of bifold doors.

“I never had a hydraulic door before; I wanted to try one,” he said. “Headroom was the main factor in my choosing a hydraulic door. I had a hangar in Dryden with bifolds on each end that came with the building. I have another brand door down on the farm. Schweiss is one of the main door companies and I was familiar with them. I helped an area contractor install the door.”

“The remote opener is real handy,” he says. “If I ordered another door it would have that. I’ve got a remote on the plane and boat rail systems too. It’s pretty slick. I have recommended Schweiss doors to others.”

He said his door arrived on time and in good condition. There were no issues with it and he said working hand-in-hand with the people at Schweiss Doors was a good experience.

“You’ve got a happy Schweiss door owner that’s living his dream up here in Canada. We’re going to retire here. That’s why we are here so I can get out and hit all these remote lakes. That’s my dream and I’m living it,” noted Riggins.

Riggins_Floatplane1.jpg: Steve Riggins can conveniently taxi his 185 Cessna on Aerocet floats to his new hangar located on Inorwic lake.  He has the hangar set up with two remote controls, one for the Schweiss hydraulic door and the other for rail systems off the lake to bring the plane and his Lund boat into the hangar.

Riggins_Floatplane2.jpg: Steve Riggins’ new hangar is 40 x 50 foot wide and big enough to store his plane and boat. The Schweiss hydraulic one-piece door on it is 48 feet wide x 15-1/2 feet high. With the hydraulic door in the up position, it provides a nice shaded canopy while loading or unloading his boat or bringing his plane in or out of the hangar.

Riggins_Floatplane3.jpg: Steve Riggins, who took up flying in 1990, stores his boat in his hangar with the floatplane. He can use his Cessna 185 on floats to access hundreds of area lakes known for their many species of fish. His hangar is nestled in a protected cove on Inorwic Lake near Dryden, Ontario, Canada.

Riggins_Floatplane4.jpg:  After Steve Riggins taxies his Cessna between the two docks in front of his hangar, all he has to do is hook it up to a rail system operated by a remote control to bring it into the hangar.

Riggins_Floatplane5.jpg: Steve and Ellen Riggins are living their dream at their retirement home near Dryden. Their Cessna 185 gives them access to hundreds of surrounding lakes for fishing and hunting. 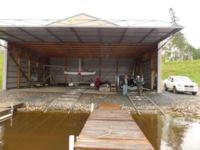 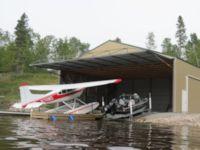 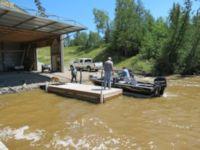