Schweiss Doors delivers 62- by 60-foot bifold door for Maine yacht services building
FAIRFAX, Minn., February 4, 2020 – The addition of an 80-foot by 150-foot marina service building with its large 62-foot wide by 60-foot tall bifold liftstrap door from Schweiss Doors and 330 metric-ton self-propelled Marine Travelift is just another part of a 38-year business plan for Phineas Sprague Jr. and his wife Joanna, the founders of Portland Yacht Services in Portland, Maine.

The expansion was done with a list of around 12,000 customers served since 1981. Many of those customers return every three years to have their boats serviced. Sixty percent of the boats hauled in by the Travelift are for commercial use.

“The goal was to create a shipyard for my harbor that will last a long time after I’m gone,” says Phineas Sprague. “The building, the bifold door and the Travelift were designed specifically to service particular boats of large size that are in the harbor. The opportunity is to save these people a lot of money in what they used to have to do to maintain their boats. Having an expanded facility here in Portland now means they won’t have to travel long distances away from home. It will allow them to do the work on their boats in the offseason in a more controlled environment and to make sure the coating systems on their boats last five to 10 years by having tighter control on the environment. As a subarctic state, the ability to haul boats and bring them inside, out of the weather and do them quickly and efficiently is major money in the pockets of the boatowners that we service.

“A good example of this benefit would be the value of more working revenue days for our customers. With this work, building and door, we are able to get commercial boats out of the weather, turned around and back out on the water perhaps a month quicker because we are not waiting for the threshold of minimally acceptable weather conditions. Having the boat ready to work faster translates directly into found revenue. One owner said this performance improvement amounted to $100,000 a week.”

Irishpan Industries owner Dave Fitzpatrick just completed his fourth project at Portland Yacht Services. Two of these buildings have large Schweiss bifold doors. The marina service building has a 71-foot tall eave height with a 1:12 roof pitch. Its 62-feet wide by 60-feet tall bifold liftstrap door is the second tallest Schweiss Doors has ever manufactured during its 40-year history, second only to the 90-foot wide by 61-foot tall door created for a Cape Canaveral, Fla., rocket hanger. Schweiss also has manufactured bifold and hydraulic doors exceeding 100 feet in width.

The big door, with sheeting, weighed in at 42,415 pounds and is wind-rated at 115 mph. For added strength, it has one exterior truss and five interior trusses. It’s equipped with four 5 horsepower motors, 24 liftstraps and an automatic latching system. Ten windows were installed in the door to take advantage of natural light.

Even though the latest door had a clear opening of 60 feet in height, Fitzpatrick says it didn’t pose any significant problems to install.

“There were a few challenges installing this big door,” Fitzpatrick says. “I leaned on Dave Schweiss a little bit and he was instrumental in helping us get the door to go up straight. The owner of Portland Yacht Services always liked the original Schweiss door we installed four years ago.”

The design criteria for the Travelift, tall bifold door and new building were for two boats representing the extreme widths, heights and weight in the harbor. The new 300 metric-ton mobile Marine Travelift, with a 42-foot width (replaces a 150-metric-ton Travelift) is capable of pulling the many larger boats and yachts out of the water when they require repair, painting or maintenance. The disruption is that prior to this, they could only service a boat about 32 feet in width and the work had to be done outdoors.

The 42-foot inside dimension of the Travelift is designed for the widest boat in the harbor, the Ft. Gaines, which is a landing craft, capable of carrying 22 cars or up to five large dump trucks, heavy equipment and dangerous cargo such as explosives. With these criteria, an unexpected market opened up. Portland Yacht Service can also service some of the wide catamarans and other vessels year-round in its well-insulated and heated-floor building.

The Schweiss tall door opening and building dimensions were designed specifically so the Travelift can drive the largest Casco Bay Lines ferry boat into the building. Casco Bay Lines is a ferry system that provides year-round passenger, freight, postal and vehicle ferry service to the islands of Casco Bay from Portland.

Getting away from the vagaries of Maine weather is important where, historically, in addition to winter months, rain delays add unwanted setbacks.

“I think the ability to produce a bifold door of this size allows the marine industry, in essentially a semi-arctic state, to be able to improve the quality and efficiency and competently take care of the boats that have been made more complex by the added struggle with the vagaries of Mother Nature,” Sprague says. “It’s impossible to do an excellent job applying modern coatings to a boat without a controlled environment; weather is uncontrollable, cyclical and a many-edged sword when schedule is important.”

Not only will Portland Yacht Service be able to serve a diverse fleet in Casco Bay, including commercial fishing vessels, fireboats and pilot boats, ferries and public agency vessels, but it will attract vessels from all over the region.

Sprague says he first became acquainted with Schweiss Doors when he contracted Legacy to erect a building for him. They recommended a Schweiss door, but there was a mix-up which prevented Schweiss from having enough time to build the door.

Irishpan Industries is well known on the east coast for its many large and small building projects. They specialize in pre-engineered steel buildings.

“Installation of Schweiss doors is easy and the owners have been happy with them,” Fitzpatrick says. “I like Schweiss doors. They are designed and engineered well and I prefer the liftstraps over cables because they are easier, safer and cleaner looking – it gives you a better feel. The straps have fewer moving parts and are less vulnerable to potential problems.”

He says he gets prompt and helpful service from the folks at Schweiss Doors and the doors are delivered on time and in good shape.

“I know what it takes to make a project run smoothly as possible and number one is communication,” Fitzpatrick says. “I’m very involved in every aspect. I learned the hard way from my mistakes and I typically don’t make the same mistakes twice. I’m involved in construction; I understand that it takes more today than 9 a.m. to 5 p.m. to run a business and because of this, you can always expect to hear from me.

“I work best with the end-user and negotiated work, shying away from the bid jobs that have a 90-page manual with them. If we come to a situation in the project, we can talk about it and move on. I work with five building manufacturers and subs so we are sure to put you in the building to best fit your application and budget.”​

PortlandYacht1: This big 62-foot wide x 60-foot tall bifold liftstrap door at Portland Yacht Services, in Portland, Maine, was the second tallest door ever manufactured by Schweiss doors. The tallest door was 69-foot tall and 90-feet wide, made for a SpaceX rocket hangar at Cape Canaveral, Fla. Ten windows on the door bring in natural light.

PortlandYacht2: Some special engineering went into this big insulated bifold liftstrap automatic latching system door for Portland Yacht Services. For additional strength it has five interior trusses and one exterior truss and is wind-rated at 115 mph.

PortlandYacht3: Bifold canopy doors don’t get much bigger than this. When completely open it stretches out 30 feet.

PortlandYacht4: Twenty-four liftstraps powered by four 5 horsepower motors easily lift the bifold door that weighs in at 42,415 lbs. with the windows and exterior siding.

PortlandYacht 5: Irishpan Industries workers, in three manlifts, finish putting siding on the door. Their next task was to install the 10 windows.

PortlandYacht7: This Marine Travelift mobile boat hoist brings yachts and other vessels in from the docks and wheels them into the new service building. Portland Yacht Service is a full-service boatyard and marina performing repair and refit of yachts, commercial craft and government vessels ranging from 20 to 300 feet. 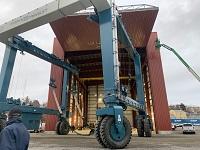 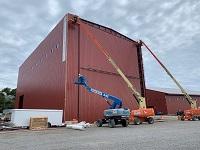 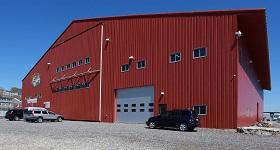 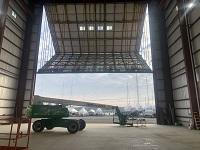