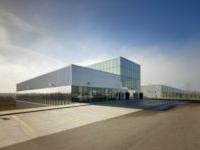 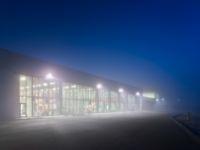 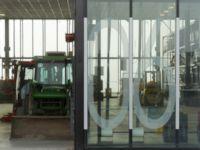 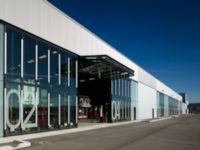 Schweiss Doors provides architectural, functional solution
Municipal building awarded for innovation, environmentally friendly features
HECTOR, Minn., February 5, 2015 – In a perfect world, the construction of a municipal building would be highlighted by both form and function. Most times, because the budget is determined by taxpayer dollars, the end result is to settle for function.

The award winning Municipal Operations Centre at Newmarket, Ont., has achieved both form and function, as an aesthetically pleasing, energy efficient and environmentally friendly facility from the inside to the out, including 20 Schweiss Doors bi-fold lift-strap / auto-latch glass doors.

Research and design alone for this $20.2 million, 65,000 square foot facility took about a year. Project lead architect Geoff Miller of Rounthwaite, Dick & Hadley Architects & Engineers in Toronto, says the city of Newmarket was committed to constructing a “green” building. Miller’s research led him to specify doors from Schweiss.

“It was our idea to put the decorative numbered glass doors on the building for two reasons,” Miller says. “We found Schweiss Doors when we were looking for a product that would have a number of functional aspects and be architecturally attractive. This is a very prominent building and the town wanted it to be a kind of landmark, featuring the doors facing a major street entering town on a hill very visible for people driving by.

“Also, from a functional standpoint, we wanted a door system that wouldn’t take up any ceiling space inside the building, particularly in the repair garages, where it’s necessary to use a crane. The bi-fold door system seemed ideal. The added advantage was the doors provide an exterior canopy when open, so it somewhat provides an outdoor workspace in the summer.”

Miller said the glass and aluminum curtain wall on the doors offer maximum performance and look great. RDH worked closely with Schweiss Doors to ensure the custom doors met the community’s aesthetic and energy efficiency goals. The 20 bi-fold doors measure 19 feet wide by 21.3 feet tall to accommodate storage, repair and maintenance areas of trucks, snowplows and other large equipment. The doors are clad entirely in double-glazed curtain wall and installed flush with the primary building envelope. This allows for transparent and fully day-lighted workspaces in the vehicle bays, while maintaining thermal continuity.

Ten doors on each side of the facility – all numbered for easy identification by visitors – allow for easy access and drive-through capabilities as well as provide passive ventilation and reduction of the energy load. During the summer, the doors can be left open during the day to create a seamless indoor / outdoor workspace. The bid to install the doors went to Superior Door & Gate Systems of Mississauga, Ont. It was the first time the company worked with Schweiss Doors.

“It was a learning experience, but no big deal to install them,” says Joe De Gasperis, general manager at Superior Door & Gate. “Like anything else you do the first time, you follow the drawings. Our experience with Schweiss Doors was great; they were very helpful. There were no problems of any kind and we wouldn’t hesitate to do more of these doors.”

The doors are powdercoated to better protect against the elements and prevent rust. Schweiss doors also include safety features such as warning lights and horns, a door base safety edge as well as an emergency backup system. Each door is equipped with the Schweiss Autolatch System.

Municipal operations centers rarely attract attention from architects or the public, but this one captured plenty of accolades and honors. Even before completion, the facility received the annual Award of Excellence from Canadian Architect Magazine for innovation and cutting-edge environmental features.

The Newmarket Municipal Operations Centre also received the Governor General’s Medal in Architecture. With contributions from the Federation of Canadian Municipalities and Investing in Ontario, this is one of the first centers of its kind in Canada to be built to Leadership in Energy & Environmental Design (LEED) Silver standards.

Thanks in part to the doors from Schweiss, 92 percent of the occupied spaces have daylight and exterior views, which greatly reduces the energy costs and reduces the environmental impact, saving an estimated 411 tons of carbon dioxide from entering the environment annually.

The design also demonstrated an energy reduction of 44 percent compared with a similar facility under the model of National Energy Code for Buildings. It incorporates a 40 percent reduction in domestic water usage through the installation of efficient fixtures and other water-saving measures, accounting for a savings of 1.5 million litres, or almost 400,000 gallons.

Other “green” features of the building include a “living” roof, geothermal heating and cooling, solar hot water heating, a reflective membrane roof, recharge stations for electric vehicles, and storm water collection to irrigate the roof. The site is landscaped with native grasses, plants and trees to improve biodiversity.

This new facility replaces three separate buildings and meets the needs of the growing Newmarket community. All town vehicles and equipment are now housed in one building, eliminating travel between facilities and maximizing resources.

“We were looking for a type of door that was big enough, that gave us a lot of natural light and would allow large equipment to get in and out,” says Harry Vanwensem, Manager of Facility Services. “When I first saw them, I said, ‘Wow, these are big doors!’ They certainly do the job.

“As taxpayers go, they don’t always like to see big things come up, but we were able to amalgamate the three departments into one operation. It gives us a better team environment to have all the departments under one umbrella.” 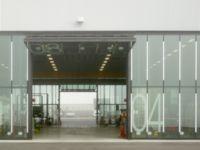 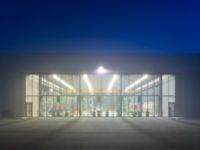 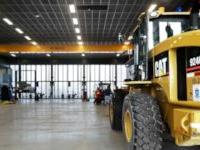