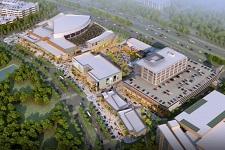 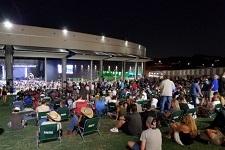 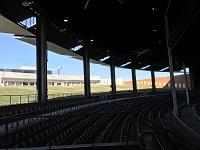 Schweiss Doors provides seven bifold liftstrap doors for entertainment complex
FAIRFAX, Minn., January 4, 2017 – The new Toyota Music Factory in Irving, Texas is a 410,000-square-foot, 16.7-acre, American Entertainment complex developed by The ARK Group and the City of Irving and designed by Gensler, for roughly $200 million. The complex houses 20 restaurants and bars as well as retail space that includes a movie theater and bowling alley.

The music arena converts easily from an intimate 4,000-seat concert hall to an 8,000-seat amphitheater, named the Pavilion at The Music Factory, the $40 million centerpiece of the complex. At the exterior of the Pavilion, at the outside of the amphitheater, are a series of seven, side-by-side, Schweiss Doors bifold liftstrap doors, ranging from 35 feet, 1 inch to 36 feet, 9 inches in width. All seven doors have a clear opening height of 25 feet, 6 inches. The engineered doors are equipped with the newly patented Schweiss automatic strap latch system, door base safety edges, 3-phase top-drive motors, black liftstraps and full length windrails that cap off the roller assembly. Roy Weisinger of Hangar Rental Inc. of Brookshire, Texas, installed the bifold doors.

“I was brought into the project nearly three years ago when it first developed,” says Oscar Stout, manager of Hangar Rental. “I was asked to read the architectural specifications for what was going on. I was provided documentation that I read through and I realized this is what these people were trying to do, and this is what they are asking for, and they really can’t get from point A to point B with what they are specifying.

“The original specifications called for rollup doors, but you are in a music venue, a sound-sensitive environment and everyone knows those rollup doors can get loud when the wind starts blowing hard. So, they then decided to look at bifold doors.”

Seven separate doors were specified for the project because they partially wrap around the pavilion building that has a 10.5-degree curve to it. These seven doors can be opened during sold-out concerts, approximately 30 minutes prior to the time an indoor performance is being held. Opening the doors that close to the start of a show allows the indoor theater to retain enough air conditioning for the performers and guests, while allowing an additional 4,000 people to watch and hear the show. Those spectators are seated on a 65,000-square-foot open air sloped hillside lawn. The seven doors offer a clear sightline to the stage from the entire lawn.

Originally, another door manufacturer was specified for the project. Stout pointed out that manufacturer only produced cable-lift doors and that his extensive experience with both companies indicated that Schweiss Doors had a better product.

“Right up until the last minute, it was back and forth,” Stout says. “Everybody was looking for the best deal, obviously, and the other manufacturer was prepared to offer the lower cost option. Eventually it got to the point they wanted to go with the other manufacturer. I told them this is the question the client, Live Nation, needs to ask: What does this manufacturer construe as warranty service because the client is going to see frayed cable within six months and they are going to say, ‘Hey, that cable is breaking and you are going to have to replace it.’

“I entered into the discussion and said you will have to pay me $200 per cable to replace it and you are going to pay my travel to get up here and I’m going to replace every cable on the doors that suffers from a frayed cable because I’m not going to warranty my work unless I know all the cables are from the same manufacturer because steel cables stretch. I don’t want to get into a situation … Well, I replaced this cable which caused more stress on that cable which caused more stress on that cable. And it’s going to cost to rent equipment and it’s going to cost you a couple thousand dollars times seven, because there are seven doors.”

Stout says the other manufacturer backed out when asked these questions. “As far as I am concerned, we stepped up to the plate and installed the superior Schweiss product. We told them if you want the best product on the market, it’s a Schweiss product.”

Hangar Rental scheduled a three-week install time frame and completed the install in less time by accelerating the project so the contractors could meet their deadlines, Stout says.

“Nothing beats the strap system, period,” Stout says. “I’ve got a little bit of engineering background and the liftstraps are bulletproof. The safety and reliability of them, the fact that they are effectively maintenance-free as long as somebody doesn’t cut them or expose them to hard chemicals. It’s a phenomenal way to go. The quality is superb and any issues that do present themselves in the field are immediately taken care of by Schweiss.

“If I get a phone call from a gentleman who’s thinking about building a hangar, I ask him, ‘What are your door needs? What are you looking for? Let’s talk about the best product on the market.’ The first words out of my mouth are always Schweiss. The second words out of my mouth are Schweiss, because we start talking about the hydraulic door, then we go to the bifold.”

Irving economic development director Scott Connell estimated that the Music Factory would bring 1,500 jobs to the community and about $14 million in local sales tax revenue during a 10-year period.

“The place looks unbelievable,” says Noah Lazes, president of The Ark Group, of Charlotte, N.C. “This couldn’t have turned out any better. It’s a beautiful venue.”

MusicFactory_Rendering: The Toyota Music Factory in Irving, Texas, covers nearly 17 acres and seats 8,000 people indoors and outdoors. Seven Schweiss bifold liftstrap doors, which can be seen in the upper left of this architect’s rendition, were installed on the Pavilion live stage building. The doors open the concert to 4,000 overflow fans on a grass slope.

MusicFactory1: During overflow sold-out concerts the seven bifold doors are opened to allow concert goers on the lawn to see the shows.

MusicFactory2: Seven separate bifold liftstrap doors were used, instead of say two or three large doors, because they partially wrap around the pavilion building that has about a 10.5-degree curve to it.

MusicFactory3: This photo shows a portion of the 4,000 indoor seats and openings where the seven bifold doors were installed wrapping around the Music Factory stage.

MusicFactory4: Door install crews raised their scissor lift to where the bifold doors were mounted 32 feet, 6 inches high. When finished the doors will give a 25-foot, 6-inch clear opening height.

MusicFactory5: This photo gives a panoramic view of the seven Schweiss bifold doors as they were installed on the Pavilion near the grassed-in outdoor amphitheater. The bifold doors were equipped with the Schweiss automatic strap lift system, black liftstraps and door base safety edges.

MusicFactory6: Music and entertainment fans seated outside the amphitheater all have a great view of the stage that also has giant video screens. The Schweiss bifold doors, ranging in size from 35 feet, 1 inch to 36 feet, 9 inches in width and all with a clear opening height of 25 feet, 6 inches, are opened about a half hour before the performances to retain air conditioning within the building. 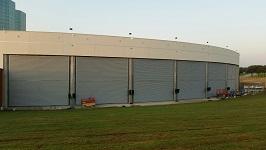 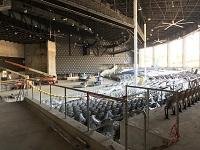