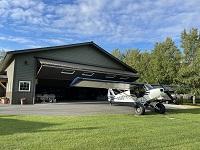 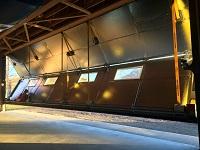 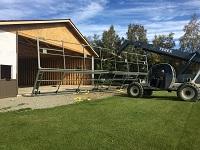 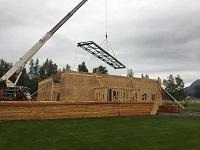 Alaska couples lives a pilot’s dream at hangar home in Palmer
FAIRFAX, Minn., February 3, 2022 – Andrew and Carri Ann Mueller of Palmer, Alaska, live in a “pilot’s dream” home that gives them a spectacular view Pioneer Peak, where they can taxi their 1973 Citabria 7GCBC or 1966 PA-18 Super Cub right to their hangar.

Andrew is a lucky man. His wife, Carri Ann, is the family pilot. She earned her wings about seven years ago. Andrew enjoys being along for the ride that often takes him on hunting and fishing trips or just on flightseeing excursions with neighborhood pilots and friends.

Their 50-foot by 50-foot hangar, built by Ron Kuzina Builders of Wasilla, Alaska, is located adjacent to the home and comes equipped with a 44-foot by 14-foot, 6-inch Schweiss Doors bifold liftstrap door, complete with remote opener and automatic latching system. Four 2-foot by 4-foot southern exposure windows bring in an adequate amount of natural light. Kuzina has installed numerous Schweiss bifold and hydraulic doors and had no trouble at all installing the Muellers’ door.

“When I started learning about the doors, I remember walking into one of Ron Kuzina’s hangars at Anderson Lake in Wasilla,” says Carri Ann. “He told me Schweiss builds the best hangar doors. I asked him to walk me through the whole process of how the bifold door operates and I was absolutely intrigued! He gave me a demonstration on a newly installed door. There was another couple there that loved the door as well. It’s almost as though the Schweiss name sold itself and the people there stand behind it. When our door arrived at our house, I just wanted to put a big red bow on it because it was the most exciting part of the hangar for me.”

Andrew and Carri Ann were previous residents of Sterling, Alaska, but after Andrew retired from work on the North Slope oilfield, they moved from the Kenai Peninsula to Palmer, which is about 45 miles northeast of Anchorage in the Matanuska-Susitna Borough. It was there that they built their beautiful three-bedroom modern home.

“We sometimes leave the hangar door open and set chairs outside to enjoy the beautiful view of Pioneer Peak,” Carri Ann says. “I kid around and tell people my airplane has the best view. From what I learned we chose the bifold door based on the wind conditions in Alaska."

The couple is amazed at how quiet the door is when going up and down and love the fact they have remote control.

“Last spring, in March when we were starting to get warmer days, we were excited to go flying with our two neighbors,” Carri Ann says. “As we watched their hangar doors go up, right when I hit the open button on the remote control, an earthquake started. The first thing you think of, ‘How big is it going to be?’ I took my finger off the remote and wondered if the door was coming down.”

Kuzina, who is also a pilot, said he personally prefers the quiet operation of the Schweiss hydraulic doors and how they seal up nice and tight. “Everybody’s got their own thing,” he says. “I think all of the Schweiss doors are great and they all go together quite well. We’ve had no issues.”

Andrew Mueller says, “It’s a great product. We’ve had flawless operation since it’s been installed. The straps seem more user-friendly. I like the straps over the cables; they just look better and have a smoother operation. We get a lot of use out of the door and open and close it about four to five times a week.”

MuellerHangar1: The Mueller hangar is home for their 1973 Citabria 7GCBC and a 1966 PA-18 Super Cub. A grass and paved landing strip leads to their hangar. The 1973 Citabria 7GCBC is a great backcountry machine. The Muellers have a set of skis for winter use and a nice set of tundra tires for landing most anywhere.

MuellerHangar2: The 44-foot-wide bifold liftstrap door is equipped with a remote opener and automatic latching system. The Muellers like the bifold door style because of their smooth user-friendly operation and because they look very nice.

MuellerHangar3: Alaska is well known for the awe-inspiring multi-colored light displays given off by the Northern Lights (Aurora Borealis). Winter nights are the best time to see them as they dance across the sky, as seen here above the Muellers' home 45 miles northeast of Anchorage.

MuellerHangar 5 and MuellerHangar6: Ron Kuzina Builders of Wasilla, Alaska, used a large crane to lift the 44-foot Schweiss Doors bifold door from the delivery semi to the other side of the hangar. Kuzina put the bifold door into place using this Terex Telehandler.

MuellerHangar7: Living the life. Andrew and Carri Ann Mueller of Palmer, Alaska, have a magnificent view of Pioneer Peak from their new hangar that holds a 44-foot by 14-foot, 6-inch Schweiss bifold door. Just outside the 50-foot by 50-foot hangar is a grass and a paved landing strip. 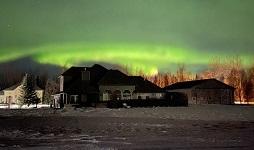 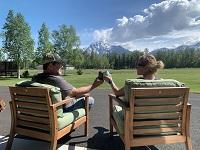 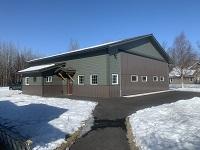