Initiative to develop premier aircraft care products leads to new hangar with 115-foot hydraulic Schweiss door
FAIRFAX, Minn., December 23, 2020 – Body shop work is in John Mosley’s blood. From the time he was 15, he’d been painting cars at his dad’s Clinton, Miss., body shop. He was born into a family that did autobody repair – his dad was a body man before he was born until the day he died.

A love of painting and a passion for quality refinish work sparked Mosley’s interest in founding and producing his own better line of ceramic coatings and sealants. He had used just about every product out there, but wanted a shinier, stronger and longer-lasting solution. He came up with an extensive line now known as John’s 360° Coatings.

Mosley earned his pilot’s license in 1992 and now has multi-engine and instrument ratings. One aircraft you’ll find in his new hangar is his Grumman TBF Avenger, an American bomber developed initially for the United States Navy and Marine Corps, similar to the Avenger future-President George H.W. Bush was shot down in over the Pacific Ocean during World War II.

The result of his success in business has led to the construction of a 100-foot by 150-foot hangar at John Bell Williams Airport in Bolton, Miss., three nautical miles northeast of Raymond. Inside the hangar are offices, a pilot lounge, briefing room, receptionist’s desk and two office desks made out of a DC-10 engine cowling. The hangar has a Schweiss Doors double-truss 115-foot wide, 23-foot tall one-piece hydraulic door. The specially engineered all-steel door, which weighs 37,472 pounds, is equipped with a centrally located walk-through door, two exterior trusses for added strength and is insulated and painted a bright white inside with red trim detailing on the lower exterior truss and interior trim of the hydraulic door.

“The reason I even entered that field is because we wanted a coating we could put on our round engine airplanes that would stand up to the engine oil, smoke and all that with the cleaners we had had to use constantly,” Mosley says. “Anytime we used degreasers, it would take the wax off. We wanted a coating we could put on our airplanes, coat them one time, clean them as often as we needed, knowing that they would still be protected. You couldn’t do that with conventional waxes or sealants, so I started experimenting with a ceramic field which worked better than wax, but it didn’t hold up for a long time. Then I started researching polymer science.”

The coating he came up with was the result of a lot of work by himself and a group of chemists for more than a year. He settled on a company that mostly developed different types of coatings using nanotechnology. They said they could develop something, but it was going to be a two-part coating that had to be mixed together causing a reaction that would latch that coating to the surface and withstand cleaners that were being used on airplanes. Because the coating is very hydrophobic and oil phobic, water and oil can hardly stick to it.

“We worked hard to come up with a formula that I feel is the best formula and the only one of its kind that I know on the market,” Mosley says. “It’s not a simple ceramic, one-step coating like some coatings on the market. The advantage of “The Avenger” two-part activated coating is that when you mix Part A and Part B together in equal amounts, a reaction is going to take place. The beauty of that reaction is that it helps our coating to actually bond to the surface you put it on – so it’s a versatile coating different from any other product that you’ve probably used on your car, boats or aircraft before, but its also superior to any product you’ve used before.”

Mosley says he became familiar with Schweiss Doors over the years hanging around hangars.

“I’ve been to so many different airports and to Oshkosh for every year but one since 1992,” he says. “I actually own three hangars. When we got ready to build this hangar, I looked at everybody’s doors again. I have several friends that have hydraulic doors and I like the operation and looks of them better than bifold doors. I just kind of settled down on Schweiss because I like the look of the door and when I called and talked to Brent at Schweiss, I was satisfied with everything he told me. I like the size of the door because I can move the airplanes in and out without having to move a lot of stuff. I like the quietness and smoothness and looks of it.”

“The install went great,” Mosley says. “The contractor had never put up a big door like this before. He said he appreciated that whenever he called, the guys at Schweiss were very good to work with.”

The red curtained-off area within the hangar is where aircraft are painted. There are three large areas in the hangar where they can spray airplanes at the same time. Two large 60-foot by 60-foot areas allow painting of airplanes side-by-side within the curtained-off individual rooms. The third 20-foot by 50-foot area is used to spray control parts such as ailerons, elevators, cowlings and rudders. All the 360° Coatings are done in a sanitized clear area out front.

The popularity of Mosley’s various products has blossomed from employing two or three people to 37 at both locations. He has a waiting list for about four months at his hangar and his products are now available through his website. (www.johns360coatings.com)

MississippiHangar1: The AeroShell Aerobatic Team is a familiar name in airshow lineups, having performed in front of millions of fans all over North America for more than 25 years. They love the “John’s 360° Coatings” that John Mosley put on their T-6 WWII vintage aircraft. The T-6, nicknamed “The Pilot Maker,” was originally introduced as a basic trainer for the U.S. Army Air Corps in 1938.

MississippiHangar2: John Mosley, owner of John’s 360° Coatings in Clinton, Mississippi, built this 100-foot by 150-foot hangar, complete with a Schweiss Doors 115-foot by 23-foot hydraulic door. The large hangar, located at John Bell Williams Airport in Bolton, Miss., is capable of holding numerous aircraft, vehicles or boats that can be painted or coated with “John’s 360° Coatings.”

MississippiHangar3: Mosley is an experienced multi-engine-rated pilot who enjoys flying his Grumman TBF Avenger torpedo bomber developed originally for the Navy and Marine Corps. It’s parked here with its wings folded under the large canopy of the hydraulic door. The red centrally located walk-through door can be seen directly above the aircraft.

MississippiHangar4: Mosely was photographed flying his TBF Avenger at the Oshkosh Air Show. The Avenger entered U.S. service in 1942, and first saw action during the Battle of Midway. In September 1944, future-President George H.W. Bush was shot down while flying a similar TBM VT-5 Avenger over the Pacific. Both of his crewmates died. He was rescued at sea by an American submarine.

MississippiHangar5: The inside of Mosely’s hangar and door are painted a bright white with red trim around the insulated door. A North American Aviation T-6 Texan stands ready to take to the air. This 1935 aerobatic trainer aircraft was used to train pilots of the United States Army Air Forces and United States Navy.

MississippiHangar6: The inside of the hangar has offices, a pilot lounge, briefing room, receptionist area and other amenities. Two large hydraulic cylinders lift and secure the all-steel 37,472-pound door with sheeting in about five minutes.

MississippiHangar7: There are three areas in the hangar where they can spray airplanes at the same time. Two large 60-foot by 60-foot areas allow painting of the airplanes within their red curtained off and sanitized individual rooms. A third 20-foot by 50-foot area is used to spray aircraft control parts such as ailerons, cowlings and such.

MississippiHangar8: Mosely said he chose a hydraulic door over a bifold door because he liked the looks of the door and the quietness and smoothness of operation. He checked with several other companies before deciding on Schweiss. 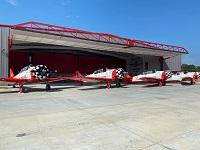 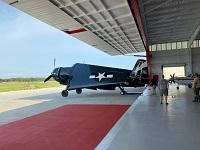 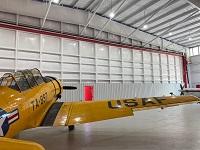 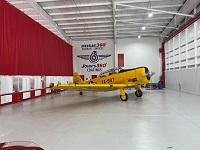 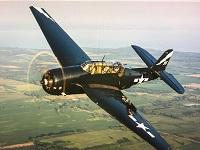 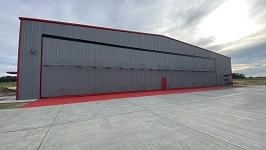 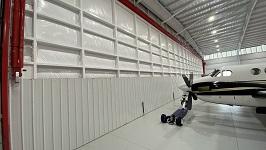 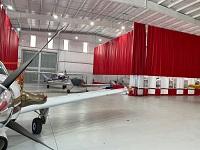