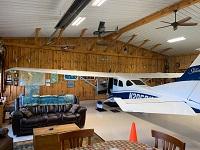 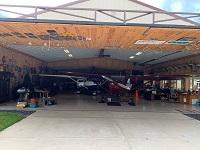 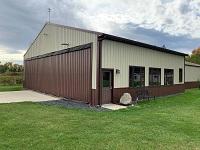 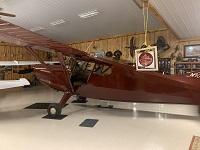 Michigan hydraulic hangar door is more of a hangar mancave wall
FAIRFAX, Minn., August 4, 2020 – Gary Huffman lives in southern Michigan, about 60 miles from the state capitol of Lansing. He likes to kid people when they come inside his hangar “mancave” asking him where the hangar door is. He tells them he takes the wings off his plane and brings it in through the window!

Except for the telltale red hydraulic cylinders on each side of the closed door, it really isn’t very easy to tell where the hangar door is. When you look at the door, it closely resembles another white pine wall decorated with deer antlers, maps and photos.

Huffman has a 43-foot, 7-inch by 11-foot, 1-inch custom-made Schweiss hydraulic door on his hangar; the hydraulic pump is hidden away in a white pine box he constructed to conceal it.

He has always been an avid outdoorsman, who as a retired science teacher, principal and educational coordinator for the Conservation District, now spends most of his time in the woods or in the air. He flies an absolutely gorgeous 1978 Cessna 206 Stationair and a pristine rebuilt 1948 four-place Stinson 108 Voyager. He takes off and lands from an 1,800-foot north/south runway and 1,300-foot east/west crosswind runway.

“I’ve been a flight instructor for 35 years or so, with over 13,000 hours and over 6,500 dual hours in the right seat,” Huffman says. “I’ve flown all kinds of airplanes. I still independently instruct using a lot of different airplanes because that is something I like to do.”

He attributes his start and love of flying to his wonderful wife, Phyllis, who encouraged him to take to the air at age 35.

“I just complained one Saturday morning that with a family and being on call 24/7 with school administration issues, that there didn’t seem to be any time for anything else,” Huffman says. “I went to the local airport; took one lesson and I was hooked like a bass in an Alabama river. I went full steam and had my license in less than 90 days. It was purely because I enjoyed it. I went out and got my instrument and commercial ratings and after that, I became a Certified Flight Instructor with a Double II rating. I also have a seaplane rating.”

Huffman says he was in a lot of flying clubs and partnerships before branching out on his own and purchasing a 1975 Cessna 182. He later picked up a 1978 Cessna Cardinal RG and a 1970 CA Citabria, now owned by a physician who he taught to fly. That was 30 years ago and he still gets to fly it now and then.

“My hangar was an old barn that I put a big extension on,” Huffman says. “Half of it is my workshop and the other half is my clean room/mancave. I do a lot of hunting and have a lot of mounts; it’s like a natural history museum. I designed it to be climate controlled by nature. All of the windows are on the north side so you don’t have radiant heat coming in from the south. All the walls are 12 inches thick or more with a two-inch foam insulation and it has a heavily insulated cathedral ceiling. When it’s hot or humid outside, it’s 10-15 degrees cooler inside. I use dehumidifiers to keep the relative humidity at 35 percent or lower. In the winter, I have radiant heat for the living area. Inside the hangar is a bathroom, shower, kitchen and bedroom with bunk beds for grandchildren.”

The interior walls and ceiling beam of the mancave have Michigan white pine and the interior of the hydraulic door is clad in white pine that he planted in the 1970s and harvested outside his home. He took down 60 trees and used his neighbor’s portable sawmill to cut them up.

In the old barn, he had a hangar with homemade fiberglass doors and cables where he put his PA-12. He also had a huge 50-foot by 100-foot hangar at Flint 35 years ago, where he ran his flight school out of. Huffman says he chose a hydraulic door over a bifold because it worked and looked better for his mancave wall.

His introduction to Schweiss Doors came about around a decade ago, through the thankful MasterCard of fate.

“Schweiss had a competitor who I bought a door from. I put a down payment deposit of about $3,000 on my MasterCard during the summer,” Huffman says. “I was going on a hiking trip to Arizona. I had the hangar built and with winter coming, I kept calling and calling and they said, ‘We’re coming, we’re coming.’ I got nervous about it, did some research online and got the owner’s name and phone number. On a whim, I called him and he told me he was the owner of the company and that he was in England. He said they were getting everything together and would be out here soon.

“The bells went off, so I called MasterCard and told them I thought I was getting scammed. They said other customers were having problems with that company and I would get a total refund. I can’t speak highly enough of MasterCard.”

Huffman says he remembered Schweiss Doors and called them up.

“We talked on the phone, they were super nice to me and said they knew all about the situation with that company from calls with past customers,” Huffman says. “I told Schweiss what I needed and they talked me through the whole thing and what I had to do. I wanted to put some load on the door and they told me how to calculate the weight. I sent them the specs on the door and what else I wanted and they got me scheduled. On a crappy fall day here out comes the truck. They slapped the door up and did an unbelievably great job. I like the ease of operation. It works flawlessly, I’ve never had an issue. It’s a beautiful door.”

WildlifeHangar1: Some pilots have hangar mancaves and then there are pilots who really have hangar mancaves. Gary Huffman of southern Michigan is an avid outdoorsman and pilot/instructor with many hours in the air. His hangar has a 43-foot, 7-inch by 11-foot, 1-inch custom-made Schweiss hydraulic door.

WildlifeHangar2: People coming into his hangar for the first time often ask Huffman where the hangar door is located. Here it is, and it looks and operates like a moving hangar wall.

WildlifeHangar4: Huffman designed and built this box to conceal the hydraulic pump. The only telltale signs that there is a hydraulic door on his hangar are from the two cylinders on each side of the wide door.

WildlifeHangar5: Both of Huffman’s aircraft, this 1978 Cessna 206 Stationair and his 1948 Stinson 108 Voyager are in pristine out-of-the-factory condition. Cessna envisioned the Stationair as a flying station wagon or SUV, and that’s exactly how pilots use it, filling the dependable Stationair with kids, baggage, camping gear and fuel.

WildlifeHangar6: The Stinson 108 Voyager has been totally rebuilt. Huffman designed his hangar door to easily accommodate the 33-foot, 11-inch wingspan and 6-foot, 10-inch height of this four-seat aircraft. 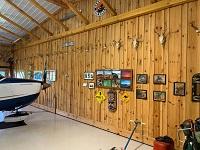