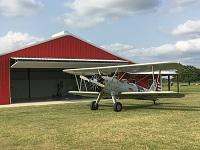 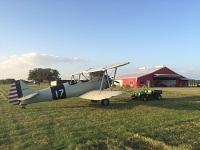 Fredericksburg, Texas, in the Hill Country west of Austin and north of San Antonio, might be the next best thing to crossing the Atlantic. The region is lush, colorful and, unlike much of the pancake-flat state, dotted with beautiful green hills that are evocative of Tuscany or the south of France. Towns like Fredericksburg offer a taste of the Old World, with German-style biergartens, schnitzelhauser and a lot of wineries.

That may have been the exact thoughts of Bill Lucy, who recently chose to move to Fredericksburg from Horseshoe Bay, Texas, to build his new home after he built a hangar and an adjacent 1,600-foot grass runway.

Lucy said he made his decision to purchase a Schweiss bifold liftstrap door after reading a story on the Schweiss Doors website, about old-timer pilot Gene Fuchs of Morgan, Minn., who owns three Schweiss doors.

“When I started looking at doors, the ‘Must See Photo’ Schweiss website profile on Mr. Fuchs sold me,” Lucy says. “I printed the article, put in in my hangar file and called Schweiss. I did research metal buildings and, in the process, saw the Schweiss Doors advertisement. That led to noticing doors in other hangars, along with the testimonies of others on the website. The experience has been great since day one. Jeremy and others at Schweiss Doors were available and helpful. Schweiss was always available to answer questions and provide the needed details, even on the weekends.

“The go-to phrase for me and my guys has been, ‘It’s in the book!’ Once the door arrived and we found the ‘yellow book’ (instruction manual), it went exceptionally well. In fact, it became a frequent phrase when we had a question: ‘It’s in the book!’ And it always was, the details, the pictures, the how-to, the not this way but this way, the book, chapter-by-chapter was amazing. It now has bent and dirty pages; torn, too. Portions were copied for the contractor to study at night. I think the effort put into developing the book reflects the commitment to Schweiss to have the door installation be as easy as the door is excellent in its operation.”

The bifold liftstrap door on Lucy’s hangar measures in at 40 feet by 14 feet clear, more than adequate to hangar his plane. The bifold door opens and closes quickly and quietly with four strong liftstraps and locks weathertight with the patented auto latch strap system that Schweiss bifold doors are known for.

Time has been a big factor in Lucy getting his boots on the ground in Fredericksburg. His love of flying, which began 43 years ago at Horseshoe Bay, has led him to a career flying mid-size cabin eight-passenger Citation Sovereign for NetJets.

“A college friend gave me his collection of flying magazines and I read every one, cover to cover,” Lucy says. “The airline trips to and from school gave me the opportunity to fly and it grew into a passion for someday wanting to be a pilot. Many of my dates with soon-to-be-wife, Cheron, included watching planes land at HOU. After college, we had the privilege to start flying lessons together. Cheron and I both received our private licenses in 1971. All of our flying was for business and pleasure until I started with NetJets in 2001.

“Flying for NetJets has been an amazing opportunity. NetJets is a great company. To have the privilege of their support as a pilot, operations, dispatch, weather, owner services and a safety culture second to none, makes flying into all of the airports, big and small, a real joy. The Sovereign has tremendous short-field capability and I have landed in some out of the way places. The folks we fly enjoy their privacy. We do sponsor many of the top touring pros and I’ve had the privilege to fly them.

“Wherever I’ve landed, I enjoy peeking into the hangars. I’ve looked into a thousand of them, old and new, small and gigantic and many have the Schweiss door system.”

Lucy’s new 85-foot by 40-foot steel red and white hangar stands out like the colorful wildflowers that emblazon the hills around Fredericksburg. Their adjacent ranch home was designed and built by his architect son, Travis, of Bercy Chen Architects of Austin, Texas. It is contemporary and complements the ranch setting.

“The design for the hangar started with our desire for it to include a bunkhouse for grandkids, office and workshop,” Lucy says. “Cheron picked the color, the red barn look for our ranch.”

The hangar is a weld-up design with materials from Metal Mart in Burnet, Texas, and constructed by Rios Construction of Marble Falls, Texas.

Lucy flies a Stearman. The Boeing/Stearman Model 75 primary trainer is probably the best-known biplane in aviation history. The biplane introduced more of World War II’s “Greatest Generation” to flight than any other airplane. Commonly referred to as the Stearman PT-17, it was manufactured by the Stearman Aircraft Co. In Wichita, Kan., from 1934 to 1945. Knowledgeable enthusiasts estimate about 1,000 Stearmans around the world are still flying. The actual total of Model 75s that were completed from the prototype X-75 to the final E75 built in 1945 was 8,428.

“Crazy! I owned it from 1995 to 2001, sold it, started looking this year and a friend found the same plane for sale in California, so I bought it again,” Lucy says. “It was restored by Peter Jones Air Repair in 1990. It has a Jacobs 275 horsepower STC engine.”

After World War II, Stearmans were sold as surplus. A single plane could be bought for $500. Many were converted for use as crop dusters. The price of a Stearman today starts at $70,000, depending on condition and quality of restoration.

My 1,600-foot grass runway breaks at about 800 feet and slopes downhill,” Lucy says. “It is fenced to keep the Red Angus cows we raise off the runway when we are flying. When my landings go past 800 feet, they are really going downhill fast. I can leap tall buildings in a single landing.

“Since having the Schweiss door, I’ve noticed other hangar doors in my flying for NetJets. There are all kinds of old massive weird engineered doors out there, cable/counter weights, 100 feet by 50 feet, 25-foot hydraulic arms and come-alongs. You could travel the country and publish a coffee table book on old hangars, especially the large wooden ones. And include the ultra-new ones, many of which are privately owned and filled with great toys and many behind Schweiss doors.”

His choice of a bifold door was partially based on price and he thought the strap model looked great. The auto latch he says, makes for a tight seal when closing.

“When the door was hung and all the equipment installed, we were hesitant to hit the ‘up’ button,” Lucy says. “At just that moment, we got a call from one of the certified installers, Oscar Snowden, who was in the area and he asked to come by and take a look. He gave us some tips, words of praise for the installation and said, ‘Hit the button and watch the magic.’ It worked perfectly, and as they say, the rest is history.”​

Lucy1: Bill Lucy recently moved to Fredericksburg, Texas, where he built a new home and hangar with a 40-foot by 14-foot Schweiss Doors bifold liftstrap door. He flies a PT-17 Stearman for fun and when on the job he pilots a Citation Sovereign for NetJets.

Lucy3: Bill Lucy and his wife, Cheron, are both licensed pilots and fly this restored Stearman biplane.

Lucy4: Bill Lucy previously owned this Stearman, sold it in 2001, and when looking for another last year he came across the same plane for sale and bought it again.

Lucy5: The door is on! It was installed with no problem following the step-by-step instruction manual. Miguel and Orlando Rios of Rios Construction built the hangar.

Lucy6: The Schweiss 40-foot by 14-foot bifold doorframe is mounted on the hangar and ready for liftstraps and white cladding. Lucy said after he had installed the door, he had a Schweiss certified installer look at it before he opened it. Following the instruction manual, it was ready to be opened.

Lucy7: This pack of Stearmans show some of the various color formations from Lucy’s silver and blue to numerous others. Many of the estimated 1,000 or so survivors have been restored to their original colors — blue fuselage and yellow wings for the “Kaydet,” Army Air Corps version and mostly all-yellow for Navy “Yellow Peril” planes.

Lucy8: Bill Lucy can taxi his Stearman out of the hangar onto a 1,600-foot grass runway adjacent to his new home.

Lucy9: Bill Lucy first began flying about 43 years ago. Since that time, he has graduated to flying an eight-passenger Citation Sovereign for NetJets. 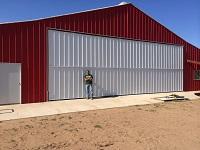 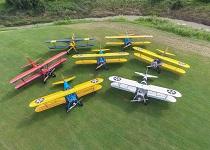 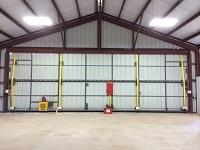 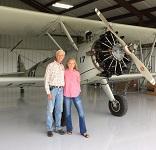 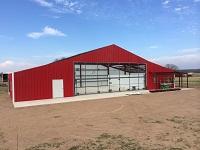 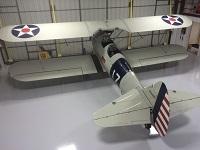 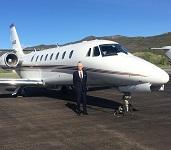