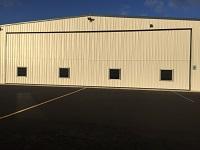 LFN is the nation’s largest not-for-profit air medical service and has provided residents across the Northwest and Intermountain West with the finest air medical transport for nearly four decades.

Mark Hewett General Contractor Company of Clarkston, Wash., was given the bid to construct a new 108-foot by 85-foot hangar to house two aircraft, a helicopter and a fixed wing turbine aircraft. Within the hangar is a 26-foot by 85-foot dedicated crew quarters. Life Flight Network personnel man the hangar 24 hours a day with pilots and emergency medical staff. Clarkston is a border city, just across the Snake River west of Lewiston.

“We had a base there for about five years, but we leased space and never really had our own dedicated hangar,” says Justin Dillingham, Chief Customer Officer for Light Flight. “This project is something we’ve been working on for a couple years now and finally completed it. Now we have a beautiful new hangar with crew quarters for all our flight crew and local administrative staff.

“We average 300-400 emergency flights a year, or about one a day,” Dillingham says. “We have a goal of a helicopter getting off the ground in 8 minutes from the time we receive a call. Fixed wing flights take a little longer because they have to file flight plans, but we try to be off the ground in less than 20 minutes. During inclement weather, the helicopter and plane are stored inside the hangar.”

The inside of the hangar is similar to a fire station where firefighters reside during their shift. It has sleep rooms, TV lounge area, restrooms, showers, a kitchen, maintenance tool area and an office. Portions of these crews alternate staying in the living quarters 24/7.

Attached to the hangar is a Schweiss Doors 70-foot by 17-foot bifold liftstrap door. The custom-made door is equipped with autolatches and was framed for four 4-foot square windows which allow a considerable amount of natural light into the hangar. It is also wind-rated at 120 mph. The well-insulated door was clad with 26-gauge metal sheeting.

Dillingham said he did have input on what type of door would be installed on the hangar, relying on a recommendation from the general contractor who highly recommended the Schweiss bifold door from past experience.

“The bifold door works great,” Dillingham says. “It’s heavy-duty and easy to operate. A small amount of education is required so staff know not to leave it open during windy days, but the door is exactly what we needed. We had windows installed to let light into the building and make sure the area outside is free from obstructions. It works great for us.”

Chance Chacon, Senior Project Manager for Mark Hewett General Contractor Company, was in charge of ordering and coordinating the installation of the Schweiss bifold door for the hangar. He said his company is familiar with Schweiss Doors, as they have previously ordered and installed five other doors.

“In a nutshell, what I like best about Schweiss Doors, is that they have it figured out. Schweiss knows how to build a bifold door and not trying to figure it out on the fly,” Chacon says. “One of the things that we appreciated was when I talked to Brent (at Schweiss Doors), one of the guards for the motors got a scratch on the paint. He didn’t question it, he just said add up if there is anything missing or if anything is not right and we’ll stand by it. Just knowing in the end that we had good partners to work with makes a big difference to us. We’d recommend Schweiss Doors to others.”

Chacon says there was no particular reason why they chose a bifold door over a hydraulic door, but cost, he said, was an issue. He said word-of-mouth was one criterion of how his company heard about Schweiss Doors. That and the fact he said he sees a lot of Schweiss doors in airport environments where he does a lot of work.

“The install went well without any issues and we were pleased with how everything came together,” Chacon says. “We had clear instructions and the pieces were where they were supposed to be. Brent at Schweiss Doors was very helpful. We never had any questions during erection of the door. One of the things I really appreciated while working with Brent was that I could put him directly in the email with myself and the metal building company because it was important that we all could work and look at things together, eliminating any possibility of something getting lost in translation. The shop drawings matched exactly.”

LifeFlightHangar1: The Life Flight “Koala” helicopter stands ready at the landing pad at Lewiston-Nez Perce County Regional Airport in Lewiston, Idaho. Behind it is the new 108-foot by 85-foot hangar that sports a Schweiss Doors 70-foot by 17-foot bifold liftstrap door.

LifeFlightHangar3: The Schweiss bifold 70-foot by 17-foot liftstrap door is equipped with autolatches and is wind-rated at 120 mph.

LifeFlightHangar4: The Life Flight liftstrap door with autolatches is well insulated. Inside the hangar are 24/7 crew quarters for flight crew and local administrative staff.

LifeFlightHangar5: The bifold hangar door is mostly kept closed. Aircraft are usually kept outside during good weather for faster response times which average about one a day. 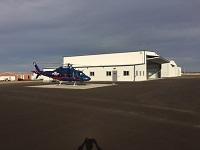 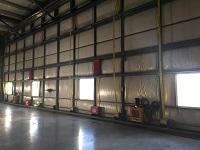 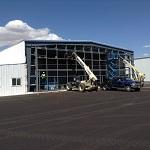 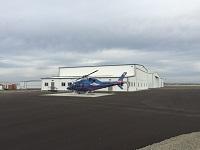