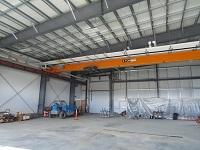 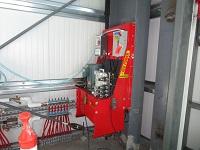 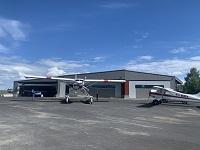 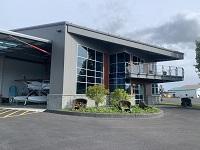 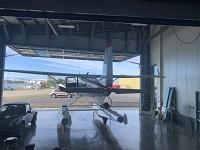 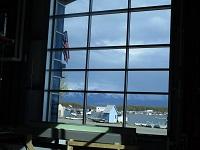 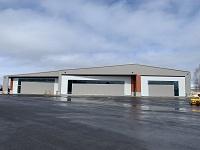 From there, Jim St. George became somewhat of a legend in rural, western and Arctic Alaska. A master-planner and problem-solver, St. Geoerge and his team at STG always figured out a way to get difficult tasks in difficult-to-reach remote Alaskan locations done and expanded into other fields of expertise. In 2013, STG and its subsidiaries Alaska Crane and Terra Foundations were acquired by Calista Corporation, an Alaska Native Regional Corporation.

Now somewhat retired, St. George finds more time for other things. He and his wife remain active flying, golfing, fishing, working out, skiing and planning international trips. He continues to stay busy through St. George Consulting when he has time to fit it in. Gained from 30 years of managing projects totaling hundreds of millions of dollars, his expertise helps companies work safely, efficiently and productively.

One of St. George's more recent priorities was commandeering a major addition to his hangar at the Lake Hood Seaplane Base in Anchorage, a state-owned seaplane/floatplane base southwest of downtown Anchorage. Operating continuously and open to the public, Lake Hood is the world’s busiest seaplane base, handling an average of 190 flights per day. It’s located on lakes Hood and Spenard, next to Ted Stevens Anchorage International Airport. The base has an operating control tower and during the winter months, the frozen lake surface is maintained for ski-equipped airplanes.

The 14,000-square-foot Wulik-DeLong LLC hangar’s name is derived from one of St. George’s all-time favorite places where he worked for a couple years in the northwestern Brooks Range of Alaska situated along the Wulik River in the DeLong Mountain of the North Slope Borough. It is during the end of June that caribou crowd these hills by the tens of thousands.

His introduction to Schweiss Doors came through some research and looking at other Schweiss hangar doors. His existing hangar had an older Schweiss 40-foot by 18-foot bifold door that his since been retrofitted with new motors and converted to liftstraps.

“The thing that attracted me to Schweiss doors, in addition to having one on my old hangar, was that I really liked the hinges, spherical bearings and grease fittings on the hydraulic doors,” St. George says. I didn’t want to lose any headroom because we bring in turbine Otters on amphibs and would never be able to get them in the hangars without the clearance of hydraulic doors. In addition to that, Schweiss has been around a long time and the doors are second to none. I wasn’t going to cut quality on the hangars by putting some cheap doors in.”

The new hangar, that now abuts the old one, was revamped with an addition of the two larger hangar bays. Another old wooden structure was demolished to make room for the new hangar additions. All of the hangar bays have access to a five-ton or a one-ton overhead crane that St. George leases out for use to other pilots. It was because of the cranes he decided to install two new hydraulic doors, partly to gain headroom and due to some airfield line-of-sight flight height restrictions at Lake Hood. The hydraulic doors are 65-feet by 18 feet, 7 inches and 40 feet by 18 feet, 7 inches. They are engineered and wind-rated for 130 mph. The largest bay is 70 feet wide by about 80 feet deep.

St. George provided a lot of his general contractor expertise along with Whalen Construction of Anchorage to upgrade his three-bay hangar. Hangared inside is his 1971 180 Cessna on Aerocet 3400 amphibious floats that he can retrofit with Federal wheel skis for use in the winter. He honed his flying skills since arriving in Alaska in 1977. Mark Ivy at Ivy & Co. Architects in Anchorage played a major role in the overall architecture design flair that St. George’s hangar presents.

Decorative windows adorn the outside of each hangar door to enable maximum flow of available light into the hangar. The larger hangar door supports 30,000 pounds with the one-inch-thick glazing and four-inch insulated metal panel cladding.

“We put a bunch of high-quality heavy glass on the doors because it has southern exposure," St. George says. "For us, natural light inside the hangar is nice. We upsized the hydraulics with some pretty rams and a bigger pump on the big door.”

“When we did the install, Schweiss was super helpful in terms of setting up the pumps and hydraulics,” St. George says. “One evening, we called the Schweiss office at 8 p.m. and got an answer. The most valuable thing to us was support, to help us through the issues during odd hours. Dave Schweiss came up last spring and looked over the doors and showed me a couple of tweaks we could do.”

“The popular style Schweiss strap lift doors are pretty common in and around Anchorage,” Strahn says. “The doors are well constructed and not difficult to install. Varco Pruden is very familiar with Schweiss doors and the loading specs.”

LakeHoodHangar2: The inside of the hangars is still a work in progress. St. George will be adding a mezzanine, kitchenette and other things. The largest bay in the hangar is 70 feet wide by about 80 feet deep.

LakeHoodHangar3: The Schweiss hangar doors are tall enough to be able to bring in larger planes such as Otters and Beavers on amphibs.

LakeHoodHangar4: St. George chose hydraulic doors for two of his hangars and upgraded his older bifold door from cables to liftstraps and strap latches. He needed the hydraulic doors in order to gain headroom and stay in accordance with airfield height restrictions at the Lake Hood Seaplane Base.

LakeHoodHangar5: Each of the three hangars, two of which St. George leases out to other pilots, has access to a five-ton or one-ton overhead crane. The hangars are fully insulated with radiant heat and LED lighting.

LakeHoodHangar6: Due to added weight from the large glass windows, St. George upsized the hydraulics on the larger door with some bigger rams and a bigger dual 10-horsepower pump. Four-inch insulated metal panel cladding was used on the exterior of the doors. The larger door supports 30,000 lbs. with one-inch-thick glazing.

LakeHoodHangar7: St. George has his Cessna 180 on floats during the summer and fits it with skis during the winter. Lake Hood, which can be seen in the upper left, is the world's busiest seaplane base, handling an average of 190 flights per day.

LakeHoodHangar8: Not many pilots are afforded a spectacular view outside their hangar windows like St. George has overlooking Lake Hood in Anchorage, Alaska.

LakeHoodHangar9: In addition to having quality doors on his hangar, St. George was very appreciative with the technical support offered by Schweiss Doors, some of which took place after hours. 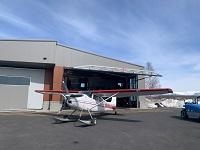