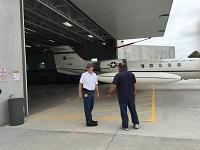 Iowa high school aviation academy insists on hydraulic door from Schweiss Doors for its new hangar
FAIRFAX, Minn., September 4, 2019 – It’s not every day you see large aircraft moving through your city streets, but the construction of a new Des Moines, Iowa, School District training facility led to the ground transfer of several helicopters and airplanes.

Since 1943, the Des Moines Aviation Academy operated one of only three high school aviation programs in the nation, but recently lost its lease at the Des Moines Airport. The program was faced with eliminating the district’s FAA-approved aviation program or building its own hangar. A $3.5 million referendum produced an off-site building with a main hangar, mechanical shop, tool and equipment rooms, four classrooms and office space.

The new 100-foot by 96-foot hangar features a 58-foot, 2-inch by 19-feet, 5-inch hydraulic door from Schweiss Doors. The door is equipped with electric photo eye sensors, manual wind pins and warning lights and horns. DDVI of Indianola, Iowa served as the general contractor on the project, while Skold Door Company of Des Moines installed the hydraulic door.

“There’s been 100 percent support to keep the program alive,” says Tim Harmer, an aviation technology instructor with the program. “With the new facility, we’ll be able to accommodate up to 120 students or more, because it’s larger. We are also able to store more aircraft and we’ve expanded the pilot side of the program by adding Redbird fully enclosed MCX and MX2 flight simulators.”

The academy has a hangar full of aircraft, including a Bell “Huey” AH-1 Cobra helicopter, an OH58 Jet Ranger helicopter, a Learjet Model 35A, a Mitsubishi MU2 twin-engine turboprop, a Stinson and Cessna 172RG and a Cessna 310.

The program is divided into four categories: general, airframe, powerplant and pilot training. The program also is offered to adults and students from other school districts that are interested in aviation.

Harmer, a teacher at the aviation academy for four years, is a certified flight instructor, who served as an emergency medical service helicopter and commercial pilot and mechanic. He also served 16 years full time in the Iowa National Guard. He is assisted by up to four other instructors who can be called in to teach aircraft airframe mechanics and ground school.

“We produce federally licensed graduates in a program that starts in 10th grade,” Harmer says. “Being that all the classes here are federal level and for college credit, all the high school students get college credits as well as federal recognition in order to receive their aircraft mechanics license. Because of that, it also has to be open to adults … our oldest student is 71. Next year, we will open the program up to ninth-graders. It doesn’t cost veterans a dime to come here and some of our students have gone on to join the military.”

Until recently, the program was heavily focused on the mechanical side of operating aircraft. The aircraft are all flyable, but will never actually take off. Harmer says they are kept in flying condition for the students’ learning benefit.

Harmer stressed that it’s important to keep the district’s aviation program going because it gives students who don’t wish to pursue a four-year collegiate degree the chance to prepare for a career in technical work. In addition to their high school credits, students in the pilot class can earn up to 44 college credits, up to 72 hours in the flight simulator and potentially save $7,000 in education expenses. That adds up to three-fourths of an associate degree and A&P Mechanics License completed before they graduate high school.

“With the amount of job opportunities out there for pilots and mechanics, it’s a great venue for people who like piloting or like the mechanics, to not go down the collegiate level after high school and jump right into a career,” Harmer says.

It was during a visit to Indian Hills Community College that Mark Thiessen, Principal Architect at Angelo Architectural in Urbandale, Iowa, was introduced to Schweiss Doors. Theissen, who headed up the design work at the academy, and Harmer discovered a 58-foot by 16-foot, 7-inch bifold door from Schweiss at the Indian Hills maintenance facility.

“I’ve known about Schweiss Doors after being around general aviation for 30 years,” Harmer says. “I like the simplicity and quiet of the hydraulic door. Depending on the time of year, we leave it open at times.”

The project originally involved another door manufacturer that produced drawings that were not properly engineered.

“I said these guys don’t have engineers that know what they are doing,” Thiessen says. “Maybe at one time they did, but they don’t now. I said you guys are probably another $6,000 above and if you screw up this door bid, it will cost you 10 times over to fix it. Then I had Schweiss Doors run it through for us and they doubled the strength of what we originally had. Within two weeks, we had a shop drawing from Schweiss and by the time the project was ready, Schweiss had their door in place.”

The Des Moines Aviation Technology program is one of the only three federal programs that allow high school students to earn certifications in the United States. It offers students the opportunity to become FAA-certified mechanics as well as earn an associate degree from Indian Hills Community College.

Harmer says the program currently has 72 students, including two girls, and eight adults. “We have also become the Women in Aviation Chapter for Iowa,” he says. “It gives exposure to people in the community of aviation and scholarships available to women.”

Students can start off in ninth grade in the Discovery Program. Then, they can choose between being a mechanic or a pilot. Currently, the breakdown is evenly split.

DesMoinesAviation1: The Schweiss hydraulic hangar door opens wide for this Learjet and many other aircraft to enter the Aviation Technology Academy in Des Moines, Iowa. The door is 58 feet, two inches by 19 feet, 5 inches tall and is equipped with photo eye sensors, wind pins, warning lights and horns.

DesMoinesAviation2: The academy has a hangar full of aircraft that include a Bell “Huey” AH-1 Cobra helicopter, OH58 Jet Ranger Helicopter, Learjet Model 35A, Mitsubishi MU2 twin-engine turboprop, a Stinson and Cessna 172RG and a Cessna 310.

DesMoinesAviation3: Numerous aircraft had to be moved down public streets from the Des Moines Airport to their new location at the Des Moines Aviation Academy’s new 100 by 96-foot hangar.

DesMoinesAviation4: Architect Mark Thiessen was instrumental in recommending that the school district change to Schweiss Doors as a more capable manufacturer. Within two weeks Schweiss provided shop drawings, doubled the strength of the door and delivered it shortly thereafter.

DesMoinesAviation5: The 19-foot, 5-inch tall hydraulic door gives ample clearance for the tail section of this Learjet to enter the hangar. When opened the large door also provides a nice shaded canopy. 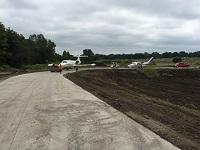 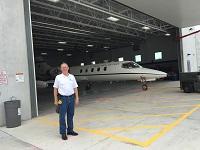 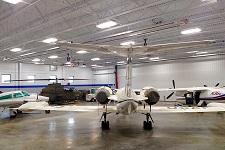 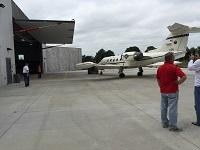