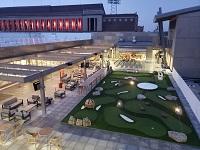 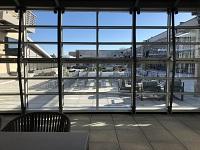 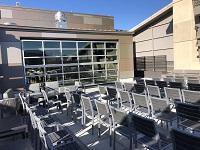 Fighting Illini look to Schweiss Doors for new Memorial Stadium Performance Center bifold doors
FAIRFAX, Minn., August 3, 2021 – When the University of Illinois decided to continue with its ongoing renovation projects to include a new Memorial Stadium Performance Center, the school looked to Schweiss Doors to supply bifold designer doors for the upper floor.

The largest of the three bifold doors is 21 feet, 6 inches by 10 feet, 8 inches and the other two measure 9 feet, 7 inches by 11 feet. The glass-clad designer doors are equipped with electric photo eye sensors, a door base safety edge, gray liftstraps, manual latches and an emergency backup system in case of a power outage. The door frames were also powder-coated.

The University of Illinois at Urbana-Champaign just finished building its new 107,650-square-foot world-class football performance center prior to the 2019 season. It’s adjacent to Memorial Stadium and directly connected to the Irwin Indoor Practice Facility. It was designed for Illini football athletes and is, in the opinion of some, a center that would draw envy from NFL teams. It’s the largest such facility in the Big Ten Conference and provides world-class player amenities to impact recruiting and support a successful football program.

Also inside is the Levenick Auditorium, with dramatic views of the practice fields, Memorial Stadium and State Farm Center. An outdoor sitting area and balcony overlooks the practice fields and the grand lobby showcases Illinois football history. A rooftop terrace has an outdoor kitchen and recreational activities, including miniature golf and an NFL alumni locker room.

“It’s a little like Christmas Day,” says Lovie Smith, who was the head football coach during the renovation. “We got to witness genuine excitement for our players. We’ve been talking a lot about a new day in Illinois football and for me, as a football coach, for our current players to have an opportunity to train in a facility as good as anyone’s around and that’s what we have given them. We’re so appreciative, so thankful to the Smith family.”

“The doors were installed on three sides of the 45 by 30-foot rooftop entertainment and kitchen section of the building,” Vandevoorde says. “Opening the doors makes it accessible from all sides and the glass doors give a full view outside. I like the simplicity and functionality of the Schweiss bifold doors. They look great.”

Petry-Kuhne Project Manager Adam Hebert says the Schweiss bifold doors are very nice and this was the first time he’d seen them specified on a project. He also commended the people he dealt with at Schweiss Doors, noting they were very helpful on every aspect of the project.

Vandevoorde says, in addition to DH Pace having the doors powder-coated in a shade of white, the outside face of the doors was covered with an all-glass full-view aluminum storefront entry-style material.

Prior to this, a massive renovation project was unveiled for Memorial Stadium in the fall of 2005. For the start of the 2013 Fighting Illini season, the athletic department replaced the main scoreboard with a new Daktronics video board that measures 36 by 96 feet. Ironically, Daktronics is located in Redwood Falls, Minn., just 25 miles southwest of Schweiss Doors. Additionally, the stadium’s sound system was updated between the upper and lower decks of the stadium’s sideline seating.

The stadium is dedicated to the men of the University of Illinois that gave their lives serving in World War I. In 2002, the stadium dedication was extended to those who died in World War II. There are a total of 200 columns on the east and west sides of the stadium; 183 columns display one name each of Illinois’ alum that lost their lives in the first war: 182 men and 1 woman.

UofIllinois1: The University of Illinois has three Schweiss Doors bifold glass designer doors on its new Memorial Stadium Performance Center. The Performance Center is part of a $79.2 million upgrade that is being used to enhance football recruitment and fundraising at the college.

UofIllinois2: The all-glass bifold doors give a good view from the inside looking out. The doorframes were also powder-coated.

UofIllinois3: The largest of the three bifold liftstrap doors is 21 feet, 6 inches by 10 feet, 8 inches, while the other two are 9 feet, 9 inches by 11 feet. The glass-clad designer doors are equipped with electric photo eye sensors, a door base safety edge, gray liftstraps, manual latches and an emergency backup system in case of a power outage.