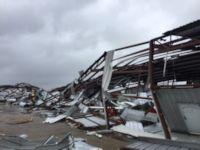 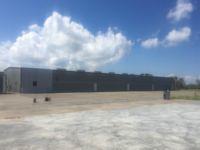 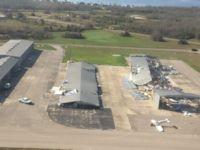 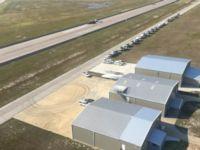 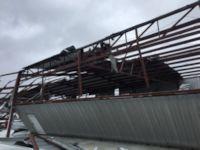 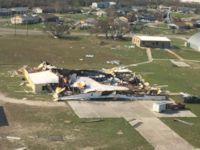 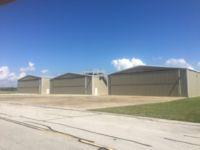 Bifold doors from Schweiss Doors save planes, hangars from damage during Category 4 hurricane
FAIRFAX, Minn., November 2, 2017 – Occasionally, customers suggest that Schweiss hydraulic and bifold doors may be more heavy duty than they need to be, but you won’t hear that from pilots who house their airplanes in hangars at the Aransas County Airport in Rockport, Texas.

The small gulf town of Rockport is located 30 miles north of Corpus Christi. The neighboring city of Fulton bore the brunt of Category 4 Hurricane Harvey that wreaked havoc in Texas in late August 2017. Harvey hit the shores with sustained winds in excess of 145 mph for a period of 5 hours with wind gusts topping 160 mph. Rockport faced hurricane force winds for more than 13 hours.

Two of the largest Schweiss bifold liftstrap doors on box hangars at Aransas County Airport are 60 by 17 feet. Eight bifold doors measuring 43 by 14 feet, 10 inches were installed on the T-hangars. Liftstrap doors are wind-rated at 130 mph and include hurricane pins to further secure them to the hangars.

“We have eight bifold doors on T-hangars and they are all still standing with every hangar intact,” Geer says. “We have another identical hangar next to it that had one of Schweiss' competitor’s doors on it. That hangar was picked up and thrown to the ground because the doors failed. Our T-hangars that survived were the biggest deal to me. They took a full frontal and then a full force again after the eye crossed over. They got hammered. They have some cosmetic damage, but the amazing thing to me was the doors held. The hurricane pin bolts (windpins) were bent 25 degrees. They are an inch thick. That tells you how strong that wind was, but the Schweiss doors took it!”

Wind pins are strong steel bolts that lock the door to the building to resist negative wind loads similar to the bolt on a standard door lock. They can be placed into the floor at the bottom of the door or as “wall pins” in the side of the bifold or hydraulic doors.

The 7,000-square-foot hangars, with the doors measuring 60 by 35 feet, are built large enough to handle at least a Beechcraft King Air 350.

On the large box hangars, Geer says one wing nut came off on a plexiglass window. The exterior cladding stayed intact. A total of 15 airplanes were destroyed and 22 more damaged. Geer said engineering students from several universities visited the airport to study the impact of the storm. He was told the Schweiss doors were the reason the T-hangars survived.

“I chose to ride out the hurricane in the airport terminal for several reasons,” Geer says. “One of which was that I knew it would be very difficult to get back into Rockport after the storm passed. I believed that the airport would be a natural staging ground for the relief and recovery efforts, so my thought process was to be ready to help with the first responders. Had I known Harvey was going intensify into a major hurricane, I would have evacuated.

“It was like having a 747 with parking brakes on at full throttle just outside the door. It was incredibly loud. We had hurricane force winds here for 13 hours. The Category 4 part sat on us for five hours. That’s never happened before. Most hurricanes move through in three to five hours. This hurricane sat on us for quite a while. It didn’t stall in speed, it stalled in forward momentum. The wind came directly out of the north for two hours and then directly out of the south for two hours; we were right in the middle of the hurricane. In fact, it took the eye over an hour to pass over. I have learned since that there were multiple F-5 tornadoes inside the eyewall.”

Hurricane Harvey was the first Category 4 storm in the U.S. since 2004 when Charley menaced Florida. Texas had not endured such a powerful hurricane since Carla in 1961. The Category 4 hurricane had a diameter of 280 miles. Two estimates report total losses as much as $75 billion. More than 2.3 million customers across Texas were without electricity as Harvey threatened to stall, setting up several days of rainfall that dropped up to 50 inches in some spots and about 15 inches in Rockport.

Harvey_Texas1: Rockport, Texas, was in the direct path of Hurricane Harvey that wreaked havoc on the Aransas County Airport. All the hangars still standing had Schweiss bifold liftstrap doors; those that had other doors were destroyed.

Harvey_Texas3: The trucks visible in file along the taxiway are just a fraction of the actual number of trucks staged at the airport in the days and weeks after the storm. At one point they had over four miles worth of bucket and equipment trucks parked bumper to bumper.

Harvey_Texas4: The small seaside town of Rockport, Texas, located about 30 miles northeast of Corpus Christi also received considerable damage. Harvey was the first Category 4 hurricane in the U.S. in 13 years.

Harvey_Texas5: Airport Manager Mike Geer was most amazed at how the eight T-hangar doors came through the hurricane with just some minor cosmetic damage. They got hit hard for two hours before the eye of the hurricane came over and then for two hours more.

Harvey_Texas6: These three large box hangars with Schweiss 60-foot by 17-foot bifold liftstrap doors look like they were totally missed by Hurricane Harvey, but they weren’t.

Harvey_Texas7: You can bet the owner of this hangar wished his plane was in a hangar with a Schweiss bifold door to protect it.

Harvey_Texas8: Once this manufacturer’s bifold door collapsed, the hangar fell down right on top of it. The top part of the bifold went flying quite a distance away.