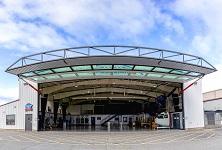 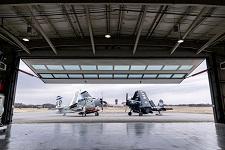 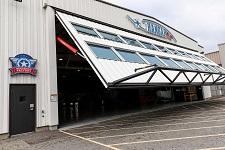 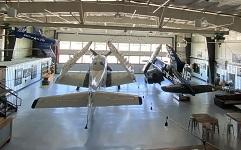 Schweiss hydraulic door for The Hangar at 743 is home to Warbird Factory
FAIRFAX, Minn., May 4, 2021 – David Prescott is passionate about preserving and maintaining the heritage and history of World War II aircraft, as well as honoring our heroes and veterans. Prescott is founder of the Prescott Foundation and CEO of The Hangar at 743, home of the Wardbird Factory in Latham, N.Y. By ensuring these aircraft continue to fly safely for years to come, his living museum provides opportunities to educate and inspire all who experience his collection.

Prescott’s foundation shares this love with the public as The Hangar at 743 serves as a museum, showing off its collection of WWII aircraft and memorabilia. The hangar also transforms into a reception hall large enough to host up to 300 people for a sit-down dinner, creating an ideal setting for military ceremonies or weddings. This one-of-a-kind venue offers guest a close-up look at iconic warbirds like the B-25 Bomber, F4U Corsair, T-6 Texas trainers, Japanese Zero and more.

Prescott’s air-conditioned 80-foot by 80-foor hangar, located on the runway of the Albany International Airport, was renovated by BBL Construction services of Albany, N.Y. A decked-out event venue, the building also featured 4,500 feet of office space and other amenities.

“People rent my hangar for events and one of the great things about it is the Schweiss hydraulic door,” Prescott says. “We incorporated two rows of windows into the design of the massive door so that even during inclement weather or in the wintertime, we can see outside. If weather permits leaving the door open, it provides a nice awning.

“This hangar was previously used as a New York State Police hangar and had a rather complex door system consisting of what appeared to be three garage doors that went up in channels. Once the doors were up, two rollers disconnected and cabled up out of the way.”

The hangar now opens wide with a 60-foot by 20-foot hydraulic door from Schweiss Doors. Prescott required a door of this size and ample headroom to wheel in a variety of aircraft, including vintage warbirds featured at the museum, as well as his Pilatus personal aircraft.

The Schweiss hydraulic door stands out with its attractive window design and features electric photo eye sensors and a door base safety edge. Prescott says he chose the Schweiss hydraulic door over the bifold door because it fit in well for event space and hangar use, and gives maximum clearance while giving the hangar a unique look and flavor. He also appreciates the fact his door has been maintenance free and the hydraulic pump hasn’t required adjustments or servicing.

Prescott says he first became aware of Schweiss Doors while growing up in Minnesota, but the doors gained more appeal after he witnessed a Florida hangar severely damaged by a hurricane.

“I really got interested in Schweiss Doors while at the American Aero Services aircraft restoration company in New Smyrna Beach, Fla.,” Prescott says. “A hurricane came through and actually blew out a couple of the walls of the hangar. The Schweiss doors remained standing as solid as could be. Wow! When the doors can survive a hurricane and the walls of the building can’t, they’re obviously pretty sturdy.”

He said he looked at a few other door manufacturers before deciding on Schweiss and noted that his local airport authority had a couple of Schweiss hangar doors as well.

“It’s very clear-cut with Schweiss; it truly is an engineered door,” Prescott says. “Even the construction company that installed it, and had never done a hangar door before, had no problem whatsoever following the directions. Everything, including the shipping, was straightforward. The other hangar door projects we observed being completed at the Albany airport were basically a pile of metal that showed up. They had to make sense of it, figure everything out and jury-rig pieces together.”

AlbanyHangar1: Dave Prescott, CEO of the Warbird Factory, sits in the cockpit of his “Déjà vu” T-6 Texan WWII trainer aircraft. He is very pleased with his 60-foot by 20-foot Schweiss Doors hydraulic hangar door and was sold on its solid construction after seeing some Schweiss doors survive a hurricane in Florida. (Photo from Prescott Foundation Collection)

AlbanyHangar2: Twenty windows across the 60-foot hydraulic door bring in lots of natural light into the hangar and give it an attractive outward appearance. (Photo by ykphotography)

AlbanyHangar4: The Skyraider and Corsair provide a pretty sight for people sitting inside the hangar. The Navy used these aircraft, with the fold-up wing design, for easier storage on aircraft carriers. (Photo by ykphotography)

AlbanyHangar5: Prescott rents out his hangar for up to 300 guests wanting to hold an event. He said they are very impressed with the big hangar door that provides a nice awning when open. (Photo by Holly Plumadore HLP Photography)

AlbanyHangar6: When it is not being used by the public, The Hangar at 743 near Albany, N.Y., makes room for Prescott’s PC-12 Pilatus, B-25 Mitchell bomber, a F4U Navy Corsair fighter, Japanese Zero and a pair of T-6 Texan’s. Visiting aircraft from The Collings Foundation frequent the hangar as well.  (Photo by Laura DiRado)

AlbanyHangar7: A sturdy truss at the base of the hydraulic door adds additional strength to an already well-built door. Prescott appreciated the fact that the door arrived on time and had an easy-to-follow set of installation directions. (Photo by ykphotography) 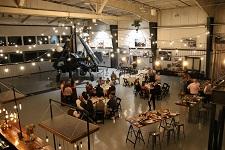 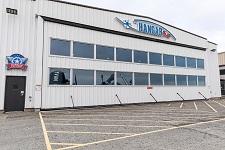 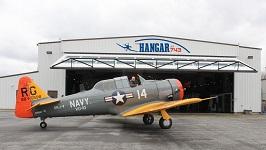