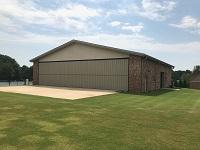 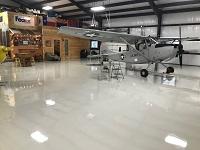 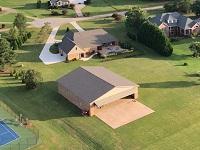 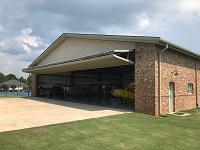 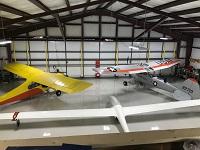 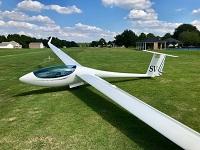 Sailplane hangar is something many pilots only dream about
FAIRFAX, Minn., November 8, 2019 – Steve Vihlen makes his living as a captain of a 767 FedEx cargo plane that takes him all over the world. The 30-year FedEx pilot who lives in Locust Grove, Ga., earned his license at an early age and joined the Air Force to become an F-16 combat pilot for eight years.

Vihlen’s main passion is flying sailplanes. He owns an American-made older classic 1964 Schweizer 126-B glider with a 59-foot wingspan and a German-made Alexander Schleicher ASG-29 modern single-place racing glider he bought new from the factory in 2006. The ASG-29 has a wingspan over 113 feet! He also flies a 7AC Aeronca Champ and uses his vintage 1952 Cessna L-19/0-1 to tow the gliders. The L-19 is in its original colors and was Air Force from 1952-1973. Civil Air Patrol used it until is was civilianized in 1978.

Vihlen built a 70-foot by 70-foot hangar adjacent to his home and to the runway at the Mallards Landing Airpark in Locust Grove, Ga. The four-plane hangar erected by Watford Steel Buildings of Adel, Ga., has a Schweiss Doors 60-foot by 12-foot, 6-inch bifold liftstrap door with a manual side latch system and exterior sheet metal cladding. The interior features a 15-foot by 32-foot mancave that connects to an outside bar, guest quarters with a living room, bathroom, shower and kitchenette. The entire hangar, ceiling and walls, has four-inch white insulation.

The love of flying has worked its way to the next generation as two of Vihlen’s sons are also licensed pilots. Ryan, the oldest, has his own private power and glider license. Two other sons have soloed in gliders. Nolan, the second-oldest, is a captain in the Marine Corps and has flown Sikorsky CH-53 Heavylift Transport helicopters the past seven years. Nolan soloed his first glider at 16 and a year later in a Super Cub.

The Schweiss bifold liftstrap door was hung by Premier Building Systems of Lawrenceville, Ga. Vihlen finished the installation by putting in the motors, liftstraps and autolatches all by himself.

“I first learned about Schweiss Doors through fellow FedEx pilot friends that had their own hangar at an airpark in Memphis,” Vihlen says. “It was an old cable version bifold door. I got a lot of information and advice from them when I was putting plans together to build our hangar. I started looking about 10 years ago and checked with another hangar door manufacturer. Schweiss seemed so much more developed and evolved and it seemed like Schweiss was well established. I felt more comfortable knowing Schweiss would back up their product better.”

Vihlen went with a bifold door over a hydraulic door because he was more familiar with bifolds and always liked the look of the bifold door better. He also liked the fact that he could park closer to the outside of the door.

“The Schweiss door is easy to install, as long as you follow the instructions,” Vihlen says. “It’s not complicated and it’s easy to maintain. It met my expectations and I haven’t had any difficulty with it. My glider club in Arkansas had the non-powered accordion doors on its hangar. They scared me a lot because of the pinching hazard. I really don’t have any experience with the hydraulic door.”

GeorgiaHangar2: The outside of the bifold door is clad with sheet metal that matches nicely in color with the rest of the hangar.

GeorgiaHangar3: When the bifold door is open, it provides a nice shaded canopy that helps keep the hangar cool in summer.

GeorgiaHangar4: Vihlen’s hangar is 70 feet by 70 feet with brick extending up to the top of the soffits on each side of the bifold door and a nice concrete apron out front.

GeorgiaHangar5: Ample lighting and a polished hangar floor, along with four inches of white insulation on the bifold door, walls and ceiling really brighten up the inside of the hangar.

GeorgiaHangar6: Steve Vihlen bought this German-made Alexander Schleicher ASG-29 single-place racing glider new from the factory in 2006. It has a 59-foot wingspan. He also owns a Schweizer 126-B glider.

GeorgiaHangar7: This aerial photo gives a good view of the Vihlen’s home and hangar located at Mallards Landing Airpark in Locust Grove, Ga.