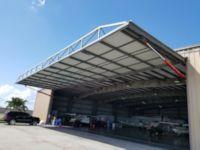 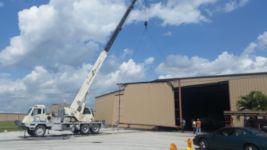 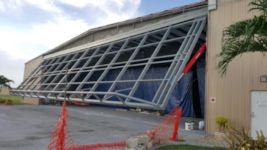 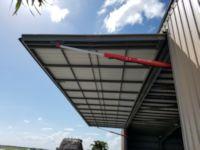 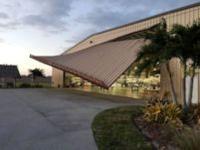 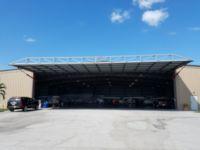 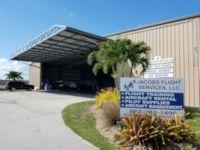 Quality ‘hinges’ on proper components for hangar doors
Schweiss Doors rescues Florida hangar owner
FAIRFAX, Minn., June 13, 2017 – Imagine walking out to your hangar to see its 74-foot door in a twisted heap, lying on the ground. Tom Vaughan, a manager at two Florida municipal airports, recently experienced this headache, discovering inferior hinges were the culprit. His next call was to Schweiss Doors.

Vaughan says the door was sold and installed by a company that went out of business. His was a perfect situation emphasizing the need for hydraulic or bifold door buyers to do some homework. Vaughan was sold hinges that were not strong enough to hold the door in place. Weather was not a factor in the door collapse; no wind, no storm, just inferior hinges.

“I can tell you one thing,” says Vaughan, who manages at Airglades Municipal Airport in Clewiston, Fla., and LaBelle Municipal Airport in LaBelle, Fla. “If we ever have to replace any other doors, it will be with a Schweiss door and not any other brand. There is no doubt about it. Getting a new Schweiss hydraulic door fixed this dilemma, but you can imagine, there are 69 more of these doors at LaBelle and Airglades to worry about each day.”

While it’s possible for large doors to be damaged during tornado or hurricane conditions, weather conditions were not a factor in this failure.

“It looked like the top hinges broke off starting with a structural failure at one corner which created a domino effect halfway across to the side of the building,” Vaughan says. “There were several planes in the hangar at the time, but they thankfully weren’t damaged. This calamity put the hangar out of operation for four months.”

Vaughan was aware the installer of his door had gone out of business, so he started a search for a new door online, where he discovered Schweiss Doors. About the same time, a local tenant returned from the SUN ‘n’ FUN air show, where he saw the Schweiss Doors display. He told Vaughan about the solid construction of the Schweiss doors.

“We chopped up the door and threw it away,” Vaughan says. “It wasn’t good for anything else. It was just nothin’ but a hunk of junk metal sitting there. It wasn’t even an old door. It was installed in 2010.”

The hangar now has a 74-foot, 3-inch by 19-foot, 2-inch custom-made hydraulic door from Schwiess Doors. The door is engineered for a 175 mph windload with a 12-volt back-up system and reinforced with a strong external truss and Schweiss’ hydraulic frame with triple push tubes. It has a hydraulic 2-speed valve that enables the door to slow down at the top and bottom cycle for smoother operation.

"We asked our local aviation engineer to look at the Schweiss door from his engineering standpoint. He took pictures and we gave him a brochure and he said he was going to take it back to his engineering firm to tell them if they have any future clients interested in putting up a door to direct them to Schweiss. Our Schweiss hydraulic door arrived on time and in good condition. Schweiss made a promise to have it to us in three weeks, and they darn sure did. We were thinking it would be 60 to 90 days to get the door. I worked with the engineers at Schweiss Doors and they were helpful with suggestions and gave us all the information we needed.”

Vaughan says a little homework could have saved a lot of hassle, time and money. Hindsight is 20/20, even when you’re flying.

Florida_Retrofit1
Imagine waking up to this knowing you won’t be able to get your aircraft out of the hangar. This inferior hydraulic 74-foot by 19-foot Florida hangar door literally fell off its hinges and had to be sent to the junk heap. It was replaced with a Schweiss Doors hydraulic door.

Florida_Retrofit2
In addition to the loss of many thousands of dollars’ worth of useless door, additional expense was incurred to remove it and purchase a replacement door. The six-year-old hangar was put out of commission for four months.

Florida_Retrofit3
The hangar is open for business with a new Schweiss Doors 74-foot hydraulic door. The large Florida hangar had several aircraft inside when the door collapsed. Had a plane been leaving the hangar it could have resulted in a lost aircraft or even death.

Florida_Retrofit4
This photo shows the super strong Schweiss Doors hydraulic steel framework. Compare the larger cylinders and exterior truss of the Schweiss door to those on the damaged door, which didn’t even have grease zerks for lubrication.

Florida_Retrofit5
The Schweiss Doors hydraulic door delivered to Florida in express fashion is engineered for 175 mph windload and equipped with a hydraulic 2-speed valve for smooth operation when reaching the door's top height and closing operation.

Florida_Retrofit6
Strong steel framework and the best hinge system on the market will keep this door working for years to come.

Florida_Retrofit7
The Schweiss door is engineered for 175 mph windload and reinforced with a strong external truss. It also has a latching system that locks the door in weathertight to the hangar.

Florida_Retrofit8
The Schweiss Doors hydraulic frame was built with triple push tubes for added strength. It also has a hydraulic 2-speed valve that enables the door to slow down at the top and bottom cycle for smoother operation. 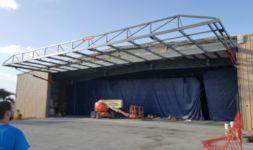