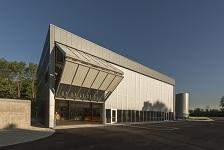 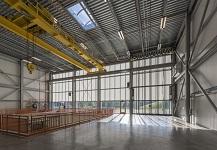 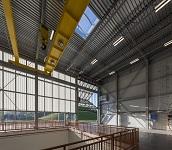 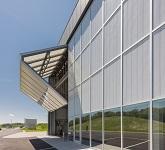 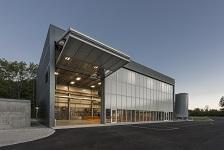 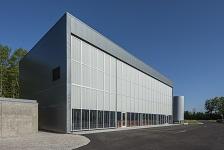 National particle physics lab architect calls on Schweiss Doors for bifold door
FAIRFAX, Minn., March 8, 2018 – Holabird & Root Architects of Chicago specified a bifold door from Schweiss Doors on what turned out to be an award-winning project.

As part of the Short Baseline Neutrino (SBN) program at Fermilab, a 20-foot, 10-inch by 23-foot, 9-inch bifold liftstrap door was installed in the new 4,500-square-foot SBN Near Detector Building. The door features gray liftstraps, electric photo eye sensors, warning lights and horns, a top-drive motor, automatic latching system and an emergency back-up system. The door is clad with glass on the bottom quarter and high-performance light transmitting panels covering the top three-fourths of the door, both to match the adjacent east wall of the building.

Holabird & Root received a Gold Award from Licensed Architect magazine and entered the project for design award consideration from Chicago Building Congress, an association that includes contractors and the whole building industry. A team of six architects designed the two new buildings constructed as part of the SBN program. The door was installed by Vissering Construction of Streator, Ill.

“In this case, we had to have a large door opening where a sectional or accordion door wouldn’t work,” says Michael Slagel, project manager for Vissering. “I also like that you can put the same matching glass curtain wall façade on the door. We installed the door, it went OK and the directions were easy to follow.”

“By having that large opening, it solves a lot of problems,” Cook says. “It also gives some of the excitement we were looking for as well as achieving the goals of the Fermilab Campus Plan of designing buildings that are welcoming and emphasize transparency. Once the CBN detector is in place, the building is essentially a simple, well-designed box. Between the door and the adjacent clerestory windows, the building is quite pleasant architecturally, during both the day and at night. As an architect, we have to make sure everything is working and we were dependent upon Schweiss engineers to ensure that the equipment works. It’s a big door with a lot of load that needs to be transferred. As architects, we come up with the ideas, but we are dependent upon the interplay between the door manufacturer and the contractor to make sure all pieces come together to ensure that the product meets the client’s expectations.

“It’s a real nice door. I like the fact that people get excited about it once it is opened. People drive over to see it. It’s practical, but in reality, we were looking for the excitement, too, as it gives a little sparkle to a refined building. We’re using it like an ornament.”

Dixon agreed. “The door matches the rest of the building and has received many compliments. It has been in place for about a year now and it works fine,” he says. “The benefit of a bifold door is that we are able to achieve a clear opening from column-to-column as well as a large vertical clear opening without making the building taller.”

The SBN Near Detector Building is designed to accommodate the installation of a custom-designed, state-of-the-art liquid argon neutrino detector to be constructed in a 34-foot deep below-grade enclosure. The other new building associated with the SBN program is the Far Detector Building located about 500 meters north of the Near Detector Building. It’s designed to accommodate the refurbished ICARUS neutrino detector. The ICARUS detector was built by international collaborators from CERN and INFN, and consists of two sections, approximately 18 feet wide, 18 feet tall and 77 feet long, weighing more than 60 tons. Each building was designed to house the unique program for two quite different physics detectors. A neutrino is a neutral subatomic particle with a mass close to zero and a half-integer spin, rarely reacting with the normal matter.

Fermilab2: Architects at Holabird & Root chose the Schweiss bifold door because Fermilab needed a tall and wide clear opening that will be used to bring in equipment.

Fermilab3: Kalwall® translucent wall systems were used on the top three quarters of the Schweiss door and building to fill spaces with highly insulated, well-balanced, glare-free natural daylight. It is lightweight, about two pounds per square foot and ideal in severe hot and cold climates.

Fermilab4: Visitors coming into the Near Detector Building sometimes have to ask how anything can be brought into it because the door blends in so well with the rest of the building walls. The door can be seen at the far right.

Fermilab5: A large crane that aligns with the bifold door, will be used to bring in the new custom designed liquid argon detector that will be assembled in the next several years to be used for neutrino physics.

Fermilab6: Fermilab personnel also like that the bifold door offers a nice canopy when open and was fitted with the same matching glass curtain wall façade as on the building.