Amelia Earhart Hangar Museum takes you back in time to the escapades of a famous female pilot
FAIRFAX, Minn., January 4, 2022 – Visiting the Amelia Earhart Hangar Museum and her nearby birthplace home museum in Atchison, Kan., provides the opportunity to go back in time when the most famous female pilot, who some would argue was more acclaimed than Charles Lindberg, began her dreams to take to the sky.

The star attraction of the hangar museum is the last surviving Lockheed Electra 10-E airplane, one of only 14 ever made. It is identical to the aircraft Earhart flew on her fateful journey and attempt to be the first woman to ever circumnavigate the world. It is named Muriel after Amelia Earhart’s younger sister, Grace Muriel Earhart Morrissey.

The Amelia Earhart birthplace home is an historic building filled with the mystery of aviator Amelia Earhart. The house she lived in from age 3 to 12 was built in 1861 in a Gothic Revival style and is on a bluff overlooking the Missouri River. Amelia Mary Earhart was born in this house July 24, 1897.

The new multi-purpose hangar facility will not only serve as a museum, but as an airport terminal and community gathering space. To preserve the history of Amelia Earhart, the 16,800-square-foot beautiful 1920-30s style hangar museum is located at the Atchison Amelia Earhart Memorial Airport.

It has a Schweiss Doors bifold liftstrap door with automatic latches and three large windows located high on the upper half of the door for natural lighting. The door measures 69 feet, 4 inches by 19 feet, 7 inches.

“The door is awesome and has been wonderful for us,” says Allison Balderrama, museum director. “We’ve used it a lot to bring in larger deliveries. It runs perfectly every time and it’s very easy to be able to tell people how to operate it, because there are different people here that have access to the building.”

“We recommended this door and we’ve used Schweiss bifold doors going back to 1994 on at least two other hangars we’ve built,” says Brett Hausman, Executive Vice President at Mueller Construction. “It’s a good, user-friendly door and nice and quiet when it opens. The people at Schweiss Doors were all very good, very responsive and quick to provide information as far as calculations on sheet length and things like that.”

Hausman says his company was the design-build contractor on the job, setting in motion the initial design and then working in conjunction with Creal, Clark & Seifert Architects/Engineers of St. Joseph, for the final design work.

Earhart’s Disappearance Remains a Mystery
After completing a number of historic flights by a woman, including her first solo flight across the Atlantic Ocean, Earhart embarked on the most challenging flight of her career. In March 1937, when she was just shy of 40-years-old, she took to the sky in an effort to fly around the world along the equator. History will tell you she and her navigator, Fred Noonan, were unable to complete the trip, supposedly running out of fuel and dropping into the Pacific Ocean about three-fourths of the way to Howland Island, where she was scheduled to refuel.

Three theories still abound to this day regarding the disappearance of this famous pilot and her navigator. One theory has it that Earhart crashed at sea due to technical difficulties or the inability to find the small island. The second theory proposes that Earhart accidentally landed in the Central Pacific that was, at the time, controlled by the Japanese Navy. There was a lot of tension between pre-war Japan and the United States during that time. Others say the Japanese may have believed Earhart landed on an uninhabited island and was not able to get help before dying on the island. According to experts, evidence shows that the charts used by Earhart and Noonan placed Howland Island nearly six miles off its actual position.

Phase 2: With the hangar museum built, the next step in its vision is to build the exhibits and have inspiration come alive. The museum will encourage young minds to achieve the seemingly impossible. The hangar museum plans will offer: Thirteen interactive exhibits and activations, a virtual reality flight simulator, scale model of Muriel’s cockpit, historic correspondence and collectibles that have shaped the history of flight and a large collection of Earhart artifacts.

“We are slowly getting together different artifacts that we are going to present over time in rotating exhibit spaces,” Balderrama says. “We’ve received some artifacts from the local historical society on loan, different things from different times. We’re hoping to do some aviation, historical-themed summer camps as well in partnership with the airport, since we share the building with them.”

Phase 3: Exhibits and activations are slated to be installed and fully open to the public in the spring of 2022. Until then, the hangar museum is open by appointment only. In the spirit of dreaming big, their hope is to bring wonder and educational opportunities to children and classrooms around the country. The foundation has created two teacher’s guides that are available through the hangar museum’s office.

Muriel Embarks on a Long Journey Home
Muriel has had many owners and lived in may places prior to her final homecoming. Delivered on December 6, 1935, to Pan-American Supply Corporation, Muriel was transferred and operated by a PAA subsidiary in Brazil and later taken over by a Brazilian national airline. This time in South America prevented Muriel from being modified by the U.S. Army Air Forces during World War II.

In the mid-1950s, the aircraft was transferred stateside to Provincetown Boston Airways and flew Cape Cod-Boston-New York routes. In early 1970, Muriel was sold to Zephyrhills Parachute Center in Florida, and was transferred six-and-half years later, to Vikings of Denmark Inc. and operated by Raeford Parachute Center in North Carolina. Three years later, Muriel was purchased and stored at Wings and Wheels Museum in Orlando, Fla., where she ended up tucked behind the museum to rot.

In 2016, the Atchison Amelia Earhart Foundation adopted this beloved plane, sending her on her final and most important journey. After weeks of meticulously dismantling and preparing the plane for her overland adventure, a cavalcade of escorts guided Muriel during her 18-day, 1,500-mile trip home from her hangar in El Cajon, Calif., to Atchison.

After years of dreaming and planning, the vision to formulate the Amelia Earhart Hangar Museum is nearly a reality and should be near completion in the spring 2022. The interior of the hangar museum still has exhibits yet to be installed, but at this time, is open for tours by appointment. To schedule an appointment, call (314) 753-8312 during regular business hours, 9 a.m. to 5 p.m., Monday through Friday. The tour and viewing of the hangar museum last about an hour. Cost is $10 for adults and $6 for children. A gift shop is open during tours.

Photo Captions:
Earhart1: The new, multi-purpose Amelia Earhart hangar facility in Atchison, Kan., will serve as a museum and as an airport terminal and community gathering space. It has a Schweiss Doors bifold liftstrap door measuring 69 feet, 4 inches by 19 feet, 7 inches, with automatic latches and three large windows located high on the upper half of the door to let in natural light.

Earhart2: This Lockheed Electra 10-E airplane, one of only 14 ever made, is identical to the aircraft Earhart flew on her fateful journey and attempt to be the first woman to ever circumnavigate the world. The Electra 10E was 38 feet, 7 inches long with a wingspan of 55 feet. It is named Muriel after Amelia Earhart’s younger sister, Grace Muriel Earhart Morrissey.

Earhart3: Visitors to the Amelia Earhart Hangar Museum will be greeted by a bronze statue of Earhart, created by George and Mark Lundeen, Lundeen Studios of Loveland, Colo., The statue is a twin to the Amelia Earhart statue the Lundeen brothers created to be placed in Statuary Hall in Washington, D.C.

Earhart4 and Earhart5: For her around-the-world flight, the modifications to her plane included four auxiliary fuel tanks in the passenger compartment, a navigator’s station to the rear of that, elimination of passenger windows, installation of a Sperry autopilot and various radio and navigation equipment and additional batteries. It had a total fuel capacity of 1,151 gallons in 10 tanks in the wings and fuselage and lubricating oil for the engines was carried in four tanks.

EarhartHome: The Ninety-Nines, an International Organization of Licensed Women Pilots of which Earhart was its first president, owns and manages the Amelia Earhart Birthplace Museum in Atchison, Kan. In 1984 the organization began fully restoring the 1860's Victorian structure where Earhart was born. The home was designated a National Historic Site in 1971. 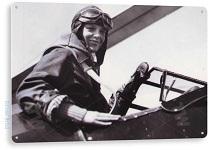 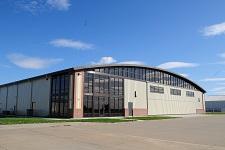 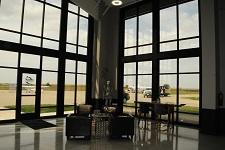 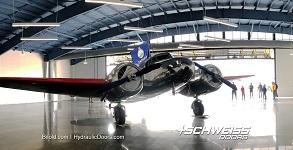 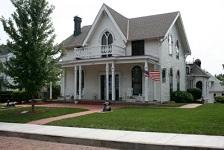 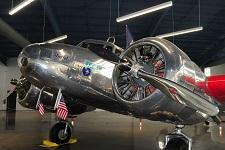 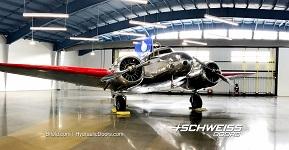