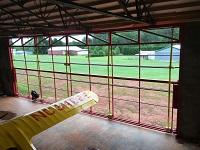 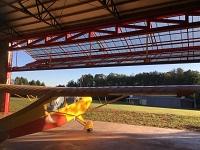 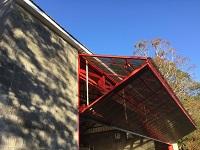 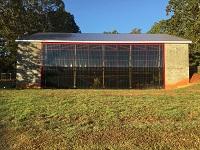 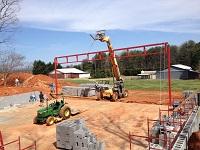 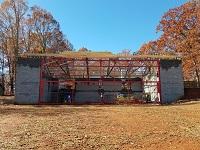 50-foot Schweiss Doors bifold opens up South Carolina hangar
FAIRFAX, Minn., January 10, 2023 – Some people golf, some people fish or find other ways to spend their leisure time. A lot of pilots look forward to getting to their hangar and taking to the sky in their own personal planes. Such is the case with Nick Cwian, a pilot with American Airlines.

Cwian has been flying professionally for 34 years and 40 years overall. He managed a glider operation for a summer prior to airline flying in 1987 and is now captain on a 737 based out of Miami that takes him on international routes to the Caribbean Islands and Latin America.

Flying is a family affair. Nick’s wife, Michelle, is working on her license; one of their five children is fully licensed; and two others are lining up to do it now.

“One of the interesting things about this hangar, is Michelle has been very instrumental in the whole project,” Nick Cwian says. “She’s just about played the role of general contractor. It was her who helped me design it and she came up with Schweiss (Doors) as a resource, working with Mike Schweiss the whole time, getting the measurements. She’s one of the best. Strong women are entertaining.”

The Cwians live at the Williamsport Airpark near Easley, S.C., 12 miles west of Greenville, which is known for hosting the annual Big League World Series since 2001.

They recently completed a new 60-foot by 70-foot concrete hangar with a 50-foot by 16-foot Schweiss bifold door. The liftstrap door, located on a 20-foot-tall hangar sidewall, is equipped with automatic latches. Stored inside the hangar are two of their aircraft, an Aeronca Champ and an Aeronca Chief. The backside of the hangar is half inground, showing only nine feet of the wall.

“I’m going to build a loft in it so we can drive our utility vehicles in on the top and have storage and an outdoor group kitchen,” Nick Cwian says. “Underneath will be a full shop, about 60 feet by 18 feet, by the time I’m done with it. It’s a deluxe mancave made for socializing, chili cook-offs and whatever else we want to do.”

Michelle Cwian adds, “We seek out Schweiss doors across the nation and in our international travels. So far, the sentiments are unanimous: ‘It’s the best in the industry.’ We agree. I will say the Schweiss door is the product we love the most, other than the building itself. It is a great piece of essential hardware. We won’t ever choose anything but Schweiss for these project designs.”

Nick says they chose a bifold door over a hydraulic door mainly because of their proximity to the runway.

“I’ve always enjoyed the bifold, a hydraulic door would be sweet, no doubt about it,” he says. “I like the bifold because I can just partially open it. We go to Oshkosh regularly and saw Mike there and saw the automatic latch system. I pretty much installed the door myself. It went very well, there was nothing I had to do over. We had a lull (forklift) here to put the 6-by-6 / 4-by-4 header across the top.”

Nick says he grew up with a Schweiss manual latch cable bifold door that was on a Morton Building hangar.

Schweiss is one of the big names in doors,” he says. “It’s a nicely engineered door and synonymous with quality. We walked around and looked at other door manufacturers at Oshkosh, but we were convinced we were going to go with a bifold and we liked the strap system and new automatic lock. It’s a solid, well-built door. I don’t have to worry about wind. I like the tracks that hold the wheels in and the tracks that hold the door up against the structural support and all phases of the door – full open, midway or full closed. Our trusses are actually resting on the header of the door, so that needed to be strong. That’s why we went with Schweiss,”

“It’s a very attractive door and it perfectly fits out needs. Spring is coming and it’s time to fly.”

Cwian1: Nick and Michelle Cwian of Easley, S.C., are enjoying their new 60-foot by 70-foot hangar at Williamsport Airpark. It has a 50-foot by 16-foot Schweiss Doors bifold liftstrap door.  Here, their Aeronca Champ is ready to leave the hangar. They also have an Aeronca Chief.

Cwian2: The 50-foot by 16-foot bifold door with its 38-inch wedge provides a nice canopy outside the hangar.

Cwian3: The Schweiss Doors bifold door was delivered and ready for set up. Most of the door installation and a lot of the hangar was completed by the Cwians.

Cwian4: The Cwians used a lull forklift to raise the 6-by-6 / 4-by-4 freestanding header where the door will be attached.

Cwian5: With the freestanding header in place, the bifold door is ready to be installed.

Cwian6: Nick Cwian works on attaching one of the five bifold liftstraps that will raise his door. The door also has strap autolatches that lock it into the building.

Cwian7: When the lightweight clear polycarbonate skin is attached to the outside of the bifold door, it will give them a nice view of the landing strip and allows the maximum amount of daylight into the hangar.

Cwian8: The backside of the hangar is half in-ground showing only nine feet of wall. A loft will be built inside so they can drive their utility vehicles in on the top and have storage and an outdoor group kitchen. Underneath will be a full shop.

Cwian9: Nick Cwian and daughter, Emily, get to work applying the exterior cladding. Michelle and daughter, Molly, also played a big part in getting the project finished.

Cwian10: As soon as the electrical is hooked up, the bifold door will be ready to operate.

Cwian11: Nick and Michelle Cwian made their hangar wide enough to hangar two planes and for additional storage on each side.

Cwian12: The cladding on the door here will be replaced with Poly UV cladding. The new cladding will enable the Cwians to see out from the inside but not in from the outside. 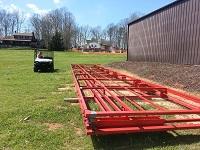 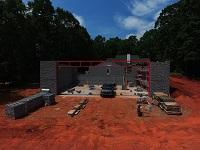 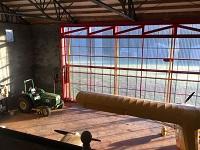