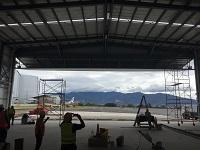 “The factory is amazing,” says Villegas. “The lineup of the fabrication area is very impressive, how you can turn a process that elsewhere would take many, many weeks longer.”

Quiros was just as impressed. “The whole process of assembly has a very useful logic,” he says. “Where you put the materials, the assembly line, electrical parts and storage have a perfect sense of rotating the process and how fast a door can be finished.”

Villegas says the factory visit also dispelled his preconceived thoughts that the door would be complicated. “When I saw it functioning … it’s basically very easy, it’s very easy to assemble, it’s very easy to use; it’s like you are having a gate on your house in a bigger way, actually simpler. You have motors, you have your straps, you have your finished product. You just plug and play,” he says.

“Our client in Central America had a requirement that every part of the construction of the 2,159-square-foot hangar and door had to be from a certified provider,” Villegas says. “The buyer of the door told us to look at Schweiss Doors. Basically, the buyer didn’t want any other door than a Schweiss bifold door for the new international corporate private jet hangar.”

Villegas and Quiros were very pleased they were able to make the trip to Minnesota. By doing so, they obtained some very useful structural information from factory sales reps, Jeremy Rieke and David Schweiss.

“Sitting down today and going through every single detail with David, we found mistakes by the building construction company that were very important,” Villegas says. “There were problems with the main columns where the bifold door is to be attached at the sides. The way it was, it was too little to support the weight.”

Villegas and Quiros were excited to get the door installed and believe it can be a showcase door for other Costa Rica new hangar projects. They want to impress the public authorities with the quality of the big hanger doors and other uses for Schweiss doors.

Chris Villegas Solera, Vice President of Operations at CILC, coordinated delivery of the door container that first arrived at the overseas port of Moin, in Puerto Limon, and later trucked inland to the International Airport of Alajuela. He also oversaw the installation of the door. He described his experience, from visiting the Schweiss factory to dealing with international airport restrictions and Costa Rican custom agents holding on to the shipment for two weeks, as a daunting, but informative task. It took 22 days to ship the door from the factory to the jobsite.

Quiros and Jose Pablo were trained to assemble the door upon its arrival, but were called away to work on other projects during the delay with customs. That left Project Engineer Rafael Ramirez to complete the assembly.

“I have to be honest with you, we got help from above,” says Solera. “Resources came to us from everywhere: knowledge, equipment, tools, etc. This, combined with the effort the guys at Schweiss Doors put into this, made our day. We were very proud and fortunate of having our company name next to the great Schweiss name.”

Solera said the assembly went well in part because of how the contents were neatly packaged and how every box was marked accurately.

“We learned the hard way that building inside an international airport is very complicated because of all the security, environmental and construction permits that are required. We had to wire all the electrical cables into an aluminum tube and flexible conduit, and then, per customer request, we had to re-paint the door to comply with their strict quality standards.”

“I am very impressed that Schweiss is making a very good quality product than can be used for different purposes from showrooms to house, shops, stadiums, NASA hangars, Army to stores, the whole spectrum of the market,” Quiros says.

Villegas estimated that once the door was built and placed in a shipping container, it would take about three weeks to arrive at its overseas destination in San Jose. He says it’s the first large jet hangar door to be delivered to Central America.

“Not knowing how to put this project together and seeing a Schweiss bifold door for the first time, we were highly dependent on the support and guidance from Schweiss personnel,” Solera says. “They are outstanding people; not only great human beings, but very patient and knowledgeable of the product they sell. I would not have been able to put this together without that support. I convinced them to download ‘WhatsApp,’ an app that enabled us to do media calls in real time and make suggestions and send a picture that seconds later, they could see. That made it very easy for us. I’m looking forward to doing more business with Schweiss.”

CostaRica2: A major global-reach box store built this 2,159 square foot hangar at the International Airport in San Jose. The hangar has a large 79-foot, 9-inch wide bifold liftstrap door that is wind-rated at 90 mph.

CostaRica3: Jose Villegas (left) and Esteban Quiros of Costa Rica got their first introduction to Schweiss doors during their tour of the factory with David Schweiss (right). The showroom, with more than 80 large photos impressed them with the many applications that the Schweiss bifold and hydraulic doors can be used for.

CostaRica4: Two cranes work into the night to get the bifold doorframes lifted into place and ready for the next step of installation.

CostaRica5: CILC bifold door installers take photos and videos of the now operational bifold door as it reaches the top of its near 22-foot clear opening.  Schweiss has shipped bifold doors to Costa Rica before, but this is the first large jet hangar door. 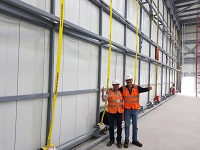 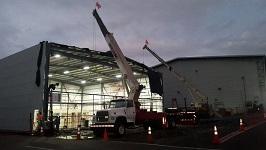 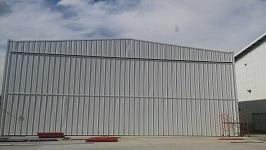 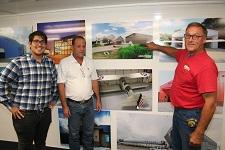