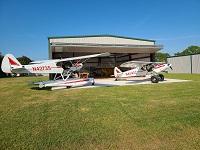 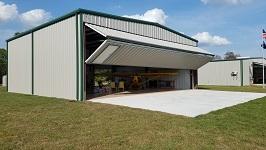 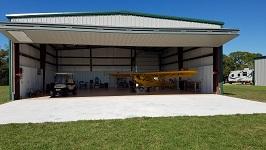 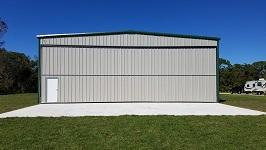 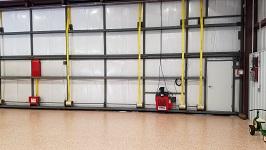 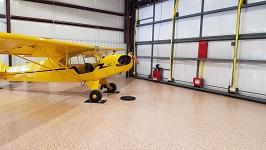 If you ask him what he thinks about cable lift doors, he’ll tell you that he would never have another one. His first bifold door was already on a hangar he purchased in Illinois; it had a 60-foot by 16-foot door that came tumbling down hard. It had only four cables to lift the heavy door. He replaced it with a new bifold liftstrap door with six liftstraps.

“I chose a bifold liftstrap door over a hydraulic door because I simply like the simplicity of operation and the automatic features on it,” Cook says. “When I fly by, I hit the remote and by the time I land and taxi, the door is open. If I were to build another hangar, I’d buy another Schweiss door. It’s probably one of the best doors out there.”

Cook has quite a selection of planes that he totally restored from what he described as junk condition to mint condition. In Florida, he hangars a 1968 Piper PA-18-150 Super Cub on Tundra Tires; a 1959 Piper PA-18 on floats; and a 1946 Piper J-3 Cub. His hangar in Illinois is home for his 1958 Cessna 175 and Taylorcraft BC-12D. His hangar, built by Worldwide Steel Buildings, is 52 feet by 50 feet with a Schweiss 50-foot by 16-foot, 6-inch bifold liftstrap door equipped with a walk-through door, auto latches and remote opener. Worldwide Steel also installed the door.

“I fly my planes for pure enjoyment,” Cook says. “Here at southcentral Lake Placid, Fla., there is lake after freshwater lake where you can spend hours just hopping from one lake to another looking for alligators or a bunch of places to park on a beach and eat. I was born and raised in Illinois where my dad taught me to fly and where I soloed on my 16th birthday in the same Cessna 175 that I still own.”

About 15 years ago, his door up north was damaged beyond use after the upper limit switch failed. He says when he called Schweiss Doors and explained the issue, they treated him well and cut him a real good price on a brand new six-strap bifold door and installed it during the dead of winter, in freezing-cold January weather.

“When I was replacing my door up north, I checked with one other manufacturer, but decided on Schweiss because they were really easy to work with,” Cook says. “When I bought my door in Florida, I didn’t want it for six months. The door and building were on the books to arrive here, but the building delivery came way before I wanted it, so it sat on the ground for about six months. Schweiss was really good about holding off delivery of the door until the building was up.”

CookHangar2: The 16-foot-tall bifold door provides a nice, shaded canopy helping to keep the inside of the hangar cooler in the hot summer southcentral Florida days. His hangar sits on a one-acre lot with access to a nearby runway.

CookHangar3: Cook completely restored all his planes to mint condition. Here his Piper J-3 Cub sits inside the spacious hangar. His other two planes, a Cessna 175 and a Taylorcraft BC-12D, are kept in a hangar at Spring Grove, Ill.

CookHangar4: The simplicity of operation and safety built into Schweiss bifold liftstrap doors is what Cook really appreciates about his hangar doors. The finished-off floor and insulated door liner give the interior of the hangar a great look.

CookHangar5: The hangar has a nice clean look when the door is closed. It is equipped with a walk-through door, remote opener and automatic latching system. The door is wind-rated at 140 mph.

CookHangar6: Cook’s Lake Placid hangar is on a grass strip where he leases access to a runway. The hangar partially shown at the right is owned by a friend of Cook’s. That hangar is equipped with a Schweiss Doors hydraulic door which was chosen because of the larger shaded canopy it provides.