Microburst damage leads Chandler Aviation to replace door with a Schweiss bifold liftstrap door
FAIRFAX, Minn., August 2, 2022 – As thunderstorms roll across the Arizona landscape, an incredible microburst came crashing down from the sky in a blast of rain, hail and wind, causing extensive damage to the Chandler Aviation building. The damage resulted in the need for a new bifold hangar door and revamping of the building from the roof down.

Microbursts, one of nature’s most dangerous windstorms, are small but powerful bursts of wind that rush downward out of a thunderstorm. They can be wet or dry. When the microburst hits the ground, the damaging wind spreads out in all directions. Once they reach the ground, microbursts have been known to produce wind gusts up to 150 mph.

“When these storms drop, they drop with a tremendous amount of force,” says Frank Setzler, owner of Chandler Aviation since its beginning in 1984. “One of those microbursts landed just south of my building. It tore aircraft from steel chain tiedowns and blew heavy airplanes around the field like they were little Tonka toys. My building was in the middle of it. My neighbor who has a newer building lost sliding doors of the north and south side of his building. I lost nearly half of my roof and damage to the door was virtually equal. The standard rolling doors on the south side of our building were dislodged and fell off the track system, causing damage to several planes locked inside the hangar during the microburst. The insurance company surmised the winds to be in the range of 90 mph.”

The Chandler Aviation building in Chandler, Ariz., how has a 48-foot by 14-foot, 10-inch Schweiss Doors bifold liftstrap door on it. The door is equipped with a manual latch system. Four translucent polycarbonate panels at the top half of the door allow natural daylight to brighten up the inside of the building.

“I spec’d out the bifold door from Schweiss,” Setzler says “We have several Schweiss doors here at Chandler Municipal Airport on private hangars. I’ve been in and out of a lot of different hangars over the past 30 years and I can see the quality of Schweiss.

“Now that I see the differences in the construction and engineering of my new Schweiss door, compared to my previous electric bifold door, I doubt there would be a failure of this door under the same conditions that his us previously. From the quality and professionalism of our building contractors (Central Construction Co. and Dan Barnett Arizona Corporate Builders), we definitely have a superior installation and a superior product.”

Setzler says he felt more comfortable with a bifold liftstrap door because it allows people to park closer to the building. He didn’t look to any other door manufacturer before choosing Schweiss.

“I had an old bifold door form another company on my 9,000 square foot building,” Setzler says. “I knew what I had before and I know that I had to change out the cables maybe a couple of times. The door that was on there I installed 20-plus year ago. It replaced there sliding doors going north and three sliding doors going south, covering the span of where our new bifold is installed. Those sliding doors were marginal at best and depending on the time of the year, I sometimes had to use my pickup to open those old doors. It’s amazing to think that each strap on my Schweiss bifold door can lift 29,000 pounds.”

Arizona Corporate Buildings in Tempe, Ariz., ordered and installed the Schweiss bifold liftstrap door for Chandler Aviation. ACB and Central Construction Company were in charge of revamping Chandler’s building and existing door damaged by the storm. Both companies have been involved with numerous buildings at the airport during the last 25 years.

“We had two adjoined buildings,” says Dan Barnett, President Emeritus of Arizona Corporate Buildings. One was a 1960s masonry wall/wood roof constructed building, where the new Schweiss door was installed. The other building was an early 1970s 80-foot by 80-foot steel building that had a rolling hangar door. With the use of a parapet system, we were able to create the look of a single new building.”

Revamping the building has given Setzler additional outside storage space for hoists, jacks, oxygen and battery carts and other equipment not used on a daily basis through the use of secure eight-foot privacy walls.

“I’ve always had a love of aviation,” Setzler says. “My dad also had the passion for it, but only as a hobby. I know his love of aviation rubbed off on me. He’d actually got as far as soloing, but wasn’t able to go much farther after starting life and a family. I pursued the mechanics and maintenance side of aviation after attending a community college in southern Arizona, specializing in the aviation industry, so I could learn how to work in the field and never looked back. I enjoy going to work every day.”

Setzler explained that in order to do mechanical and maintenance work, it takes an FAA license from the federal government called an A&P license, followed by an FAA authorized inspector certificate. After working in the field, Setzler earned his Private Pilots License about 30 years ago and now flies a 1965 Piper Comanche.

“I get a lot of use out of the door every day,” Setzler says. “We are a five-day-a-week company. We open it in the morning for circulation and again in the afternoon after the sun gets over to the other side. Plus, of course, every time we tow an airplane into or out of our hangar for service. We put insulation on it because with the old door, I could feel heat coming through the door early in the morning. For the comfort level it gives us, I am very pleased with adding the insulation. I like the door because all we have to do is push the button and it goes up.”

Chandler1: Extensive storm damage to the Chandler Aviation building in Chandler, Ariz., forced the owner to have his building revamped from roof to floor. An old damaged bifold cable door by another company was replaced with a Schweiss Doors 48-foot by 14-foot, 10-inch bifold liftstrap door.

Chandler2: Arizona Corporate Builders revamped the Chandler Aviation building and installed the 48-foot bifold door. They have installed other Schweiss doors including an 86-foot by 26-foot door on the new Triple C hangar in Scottsdale, Ariz.

Chandler3: Using a Telehandler and scissor lift, the door was installed and sheeted in no time at all.

Chandler4: Chandler Aviation’s 9,000 square foot building, with its old bifold cable door, the way it looked prior to being revamped by Arizona Corporate Builders.

Chandler5: Building contractor and bifold door installation specialist, Arizona Corporate Builders, combined two adjacent buildings. With the use of a parapet system, they were able to create the look of a single new building. 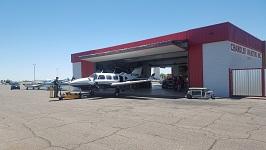 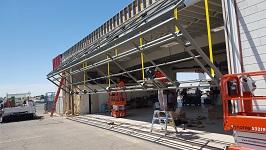 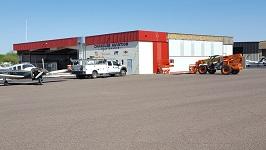 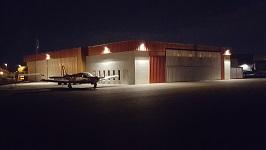 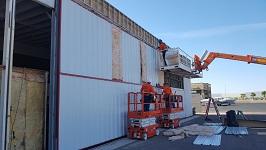