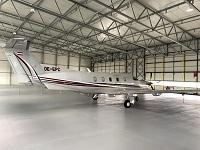 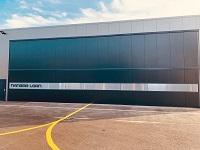 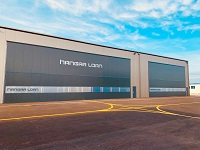 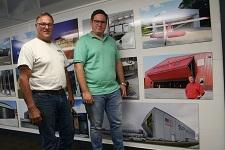 Kudrna is the CEO at KAT.AT building contracting, an Austrian company that specializes in greenhouse construction. He completed a thorough price and quality comparison between Schweiss and several European door companies and was impressed enough to fly to Minnesota for a tour of the Schweiss Doors factory.

“I checked with a company in Germany that does hangar doors and another door company, Hasla Able Group, that owns most of the door companies in Europe,” Kudrna says. “There was one small blacksmith company in Austria that produces doors that look like Schweiss doors, but it would have taken 12 months delivery time and all the other door company prices were a lot higher.”

Kudrna liked Schweiss Doors because he discovered during his visit the company is a family-owned business, much like his own that was started 50 years ago by his grandfather and passed on to his father.

Weiner Neustadt East Airport serves the Austrian state of Lower Austria. It’s used for business and general aviation and is the home to the corporate headquarters and manufacturing facilities of Diamond Aircraft, Austria’s most famous aircraft factory.

KAT.AT built three plane rental hangars there that feature five Schweiss bifold liftstrap doors. The largest hangar is 197 feet by 131 feet and has three doors: one measures 63 feet, 5 inches by 23 feet, 8 inches and the other two are 55 feet, 9 inches by 19 feet, 10 inches. Two other hangars are 65 feet by 65 feet and each has a door measuring 43 feet, 5 inches by 23 feet, 8 inches. For convenience and safety, all five doors have up/stop/down switches located at each side of the doors.

“Jeremy (at Schweiss Doors) was very helpful during the ordering process,” Kudrna says. “When I had some questions and changes in the size of the doors, he was very quick to send me the specs. With the specs, everything was clear, we made our final planning around the doors.

“Hopefully we will see more Schweiss doors in Europe. There is a market for them in the European Union. Even with the container shipping costs, the Schweiss doors are less expensive than what we can buy in Europe. Over here, almost everything outside Austria, including agriculture, comes from the Netherlands.”

AustriaHangar2: Three bifold liftstrap hangar doors were installed on the largest hangar and are shown ready for exterior cladding. Each door is powered by two bottom drive motors and they have manual latch systems.

AustriaHangar3: The rental hangars are already in use. The largest hangar has three doors and measures 197 feet by 131 feet. For convenience and safety, up/stop/down switches were placed at each side of the doors. Doors are insulated with fire-resistant sandwich panels that don’t require an inside liner.

AustriaHangar4: The “Hangar Loan” logo mounted on a corrugated aluminum panel that runs across the front of the door gives the hangar a distinctive and attractive look. Wiener Neustadt East is a small general aviation airport in Lower Austria, just south of Vienna. It is mostly known for the Diamond Aircraft production line. The airport itself has a long history, dating back to before the First World War.

AustriaHangar5: Dave Schweiss (left) gave Robert Kudrna a tour of the Schweiss Door factory in Fairfax, Minn., while his bifold liftstrap doors were still in production and almost ready for shipment. They are pictured here in the office showroom.