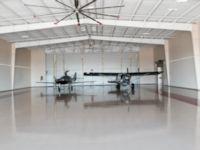 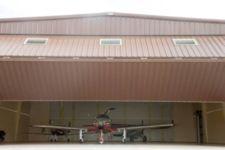 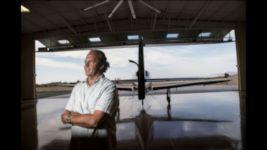 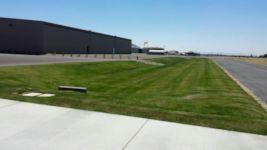 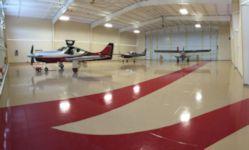 Schweiss Doors appeal to owner of multiple hangars
Quality and reputation keep Arizona aviator coming back to Schweiss
HECTOR, Minn., August 18, 2015 – When customers find a reputable company with a high quality product, they may be forever saved the time of shopping around. Schweiss Doors has been able to help hangar owners of the growing Pegasus Airpark project in Arizona save lots of time. Schweiss Doors has supplied 13 bifold doors already for the project and expects to provide 22 more in the upcoming months.

“We went with top quality executive box hangars with plumbing on deeded ground that can be passed down for generations,” says Daniel Coury Sr., one of the hangar owners at Pegasus Airpark. “Because we went with top quality 61 x 50-foot hangars with 18-foot clearance inside and 60-foot doors, we chose to go with Schweiss Doors. These hangars sell for $350,000 so it was important to have quality doors from a company with a good reputation.”

Coury was introduced to Schweiss Doors when he bought a couple of hangars that featured the company’s bifold doors. In the market to bid on 13 more hangars and with the knowledge that half of the hangars at Pegasus Airpark feature Schweiss doors, he ventured to the EAA Airshow in Oshkosh, Wis., to meet with Mike Schweiss personally.

“Mike took it on a gamble that I was legit and we later sat down to dinner,” Coury recalls. “He educated me on doors and the differences and so on. When I got back, I sold my contractor on Schweiss Doors and told him I would accept no other door. I wanted doors from Schweiss.”

Coury says he was impressed with the quality of Schweiss Doors' products as well as the reputation of the company. He was sold on bifold doors over hydraulic doors and since Schweiss was the only manufacturer that offers bifold doors with straps, the choice was easy.

“We have winds here called haboob,” he says. “We had one recently where the wind got up to 49 mph. If that wind hits, look out. I’ll open my bifold doors in the biggest wind, especially with the reinforcement Mike helped us design.”

A haboob is an intense wall of dust storm carried on an atmospheric gravity current, common in arid regions. The wind and dust can rise high as it blows over the Arizona valley, sometimes lasting up to three hours. Most Schweiss Doors customers in warmer climates prefer hydraulic one-piece doors for the extra shade they provide in the open position. Coury prefers the bifold liftstrap/autolatch door because it allows him the ability to park aircraft or vehicles closer to the doors.

“My doors are all bifolds,” Coury says. “I like the liftstraps and autolatches, but I like the new autolatch even better. Having had direct contact with Mike Schweiss and his brother Dave, I was able to see to it that not only was I getting a well-built door, but that my building was reinforced properly for it. If it wasn’t for them, I would never have gotten specs for reinforcement. Over time and years and years of ownership, I am assured that there will never be any sagging or bending of the walls. Mike had me direct the contractor to give extra building strength for the door.

“The doors are built very well, very strong, and I like the straps far better than the cables. I have four or five doors with cables at six other hangars in other airparks. They’re still working fine, but I much prefer the superior straps for wearability. I would never put a cable door up again.”

Coury says part of his marketing strategy includes the fact his hangars feature bifold doors from Schweiss Doors. “It’s a big selling point,” he says. “I’m a small company owner myself and I appreciate the fact the founder of Schweiss Doors is reachable when necessary. I appreciate the fact he is innovative and always making improvements. And I like supporting a well-run operation that has built a strong reputation.”

Arizona_Hangars1.jpg: The inside of Dan Coury’s hangar has elegance right down to the floor color scheme that matches his aircraft.  In the foreground is his Lancair Evolution and in the background are the Lancair IV-P and Aviat Husky.

Arizona_Hangars2.jpg: Coury’s 31 box hangar complex sitting on one acre is an ongoing project for him. In addition to the 13 Schweiss bifold liftstrap/autolatch doors he has already bought, he is looking at an additional 22-door order within the next two years.

Arizona_Hangars3.jpg: Dan Coury inside his hangar that has a 70 ft. x 18 ft. clear opening Schweiss bifold door. When closed, the five windows on the door bring added light into the hangar which has another 60 ft. x 18.6 ft. door at the other end for easy access to any one of his planes.

Arizona_Hangars4.jpg: Coury’s largest steel hangar is 80 ft. x 100 ft., giving ample room for up to nine aircraft. He uses this as a “show” hangar for prospective pilots seeking to own their own hangar.

Arizona_Hangars5.jpg: The hangar has optimum air circulation when the brand name “Big Ass Fans” are turned on. Here you see his Lancair IV-P and Aviat Husky that he flies into the backcountry.