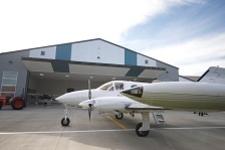 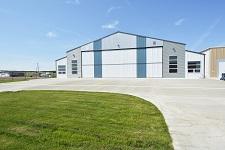 Canadian hangar shines like a new penny, inside and out
FAIRFAX, Minn., May 7, 2019 – If you think the exterior of Gary Acheson’s hangar looks slick and clean, wait until see the inside – it sparkles!

The hangar is very modern with an attached office, LED lighting throughout, in-floor heating, high R-value blown-in insulation in the walls and attic and a lounge to hang out and relax in. And the floor looks so bright and clean!

Acheson’s hangar office and pilots’ lounge has comfortable seating and is something else to behold. It has a Cirrus II flight simulator and other electronic equipment most pilots would surely envy. He’s been a private pilot for about 20 years and has two sons-in-law with about 10 years in the air.

“I have a simulator room on one side and a lounge on the other side,” Acheson says. “The simulator is for the Mooney. We use it to keep us sharp and safe.”

The hangar currently houses his four-passenger Mooney Acclaim, a Cessna 182T Skylane and a friend occasionally stores a Cessna Citation. The hangar features a custom-made Schweiss Doors bifold liftstrap door with autolatches and is equipped with warning lights and horns as well as an emergency backup system. The door measures 55 feet by 19.6 feet.

The door was delivered in a timely manner. Unfortunately, the independent shipping company that delivered it damaged the door to the extent it wasn’t reparable. Even though the bifold liftstrap door wasn’t delivered by Schweiss, company CEO Mike Schweiss went the extra step toward customer satisfaction.

“Nothing to do with Schweiss, but everything wasn’t rosy with respect to the door from the beginning,” Acheson says. "What had happened was half the door got damaged in shipment. When it was on the truck, it was all bowed out. The top of it couldn’t even be repaired in the field. I was very impressed how Schweiss handled that negative. They recognized it wasn’t right and sent us a new half of the door. The point that I want to make is that Schweiss listened, the assessment was fair and the response was quick. What impressed me about Schweiss Doors, too, it is a family-fun business – like ours.”

Family means a lot to Acheson, who runs his business with his wife, two daughters and sons-in-law. Sarasota Homes and Sarasota Realty purchase undeveloped land to build and sell homes on the development.

Even though his hangar is a new wood building hangar, Acheson chose to have a freestanding header for his Schweiss door because of the extra support it offers. The door also came with liner flashing to make installing the inside liner a breeze. Acheson and his son-in-law chose to install the door and freestanding header themselves, taking their time over a period of a few cold December days. He says the process went smoothly from start to finish.

“Another thing that I think is important … there was nobody local that could install the door,” Acheson says. S"o, what I ended up doing was reading the instructions. It took time, but on any other questions I had, I called Brent Kzmarzick at Schweiss Doors. The manuals were good and I’m really big on the after-sale support that Schweiss Doors offered. Brent was excellent. The key to the wood construction was using the freestanding header that Schweiss provided. Using that header made the whole system work extremely well. In respect to the freestanding header, it solved a lot of engineering problems.

“The liftstrap door idea is ingenious. The thought process and mechanical aptitude to create the autolatch and strap system was quite ingenious. I’m very happy with the door … good quality.”

Acheson did his online homework before choosing Schweiss Doors.

“I took a long time looking at all different types of doors,” he says. “I found the Schweiss door to be reasonably priced and there were a lot of good things on the website that helped me in designing the building itself. The 'How To' videos helped me understand what to do and how the door system would work on my building overall. That’s important to know how the doors tie into different types of construction.

“I chose the bifold door over the hydraulic door because I thought it would have less lateral stress outward on the building. Obviously, snow is also an issue where we can open up the door right away and get the equipment out. I didn’t know it at the time, but actually, I would say Schweiss is the predominant door at our airport. The Villeneuve Airport has been around for a long time, but just had a recent growth cycle with a lot of new hangar construction going on.

“It’s hard to say what one thing I like best about my Schweiss door,” Acheson adds. “I like the engineering, the quality of the door. I like the operation, the way it lifts up and down nicely and seals well and it was delivered on time. I don’t underestimate the importance of after-sale support, that I think Schweiss did an excellent job on.”

AchesonHangar1: On both sides of the Acheson hangar is an office and a lounge. Within is a sophisticated Cirrus II simulator room that he uses for his Mooney. Something he says, keeps him and his two son-in-law pilots safe.

AchesonHangar3: His new 6,000 square foot hangar is at the edge of the Villeneuve Airport taxiway. The airport, near Edmonton, Alberta, has seen considerable growth with many new and older hangars having Schweiss doors on them.

AchesonHangar4: The all-white interior of the hangar has LED lighting and in-floor heating. The orange hangar in the background also has Schweiss bifold doors on it. Five strong liftstraps open Acheson’s door. When fully open there is plenty of headroom and the door provides a nice shaded canopy.

AchesonHangar5: There’s room in the hangar for this Cessna 421 in addition to the two planes owned by Acheson. 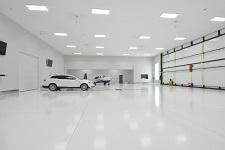 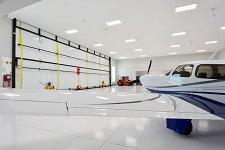